The heated matchups with the Ontario Reign reflect the larger organizational battle between Anaheim and LA, building fierce matchups and strong games at the AHL level.

Southern California rivalries are intriguing no matter the sport or level of play.

When it comes to hockey, the sport was introduced at its highest level in 1967 when the NHL awarded Los Angeles as the expansion Kings. On Aug. 9, 1988, a blockbuster trade occurred to bring the game’s most elite player to the City of Angels. Wayne Gretzky undoubtedly elevated the hockey community in the area and so much, the popularity grew enough to bring the arrival of the Anaheim Ducks to professional hockey in 1993. This began a hockey rivalry to Southern California creating action, storylines, and three Stanley Cups since its inception.

Fast forward to 2015, when another professional hockey rivalry was introduced at the American Hockey League (AHL) level. The Pacific Division formed following the relocation of five AHL affiliates to California, including the Ducks and Kings top minor league affiliates to Southern California. Those teams would be housed in San Diego and Ontario, respectively. Just over 100 miles separates the two teams , forming an instant rivarly. Mix in the fact the NHL affiliates are already heated competitors, just 30 miles apart, makes it even more fantastic competition.

“The move to the west was really challenging but it was certainly worth it,” said former AHL President and CEO David Andrews. “If I look at our league today, the addition of the Pacific Division and a market like San Diego and others in that division in California led us to move into Arizona, Colorado and next year into Nevada. You can see the growth that we have had because of our move to the west and it gives us a national footprint in the United States and has brought us into some great markets and helped to grow the game.” 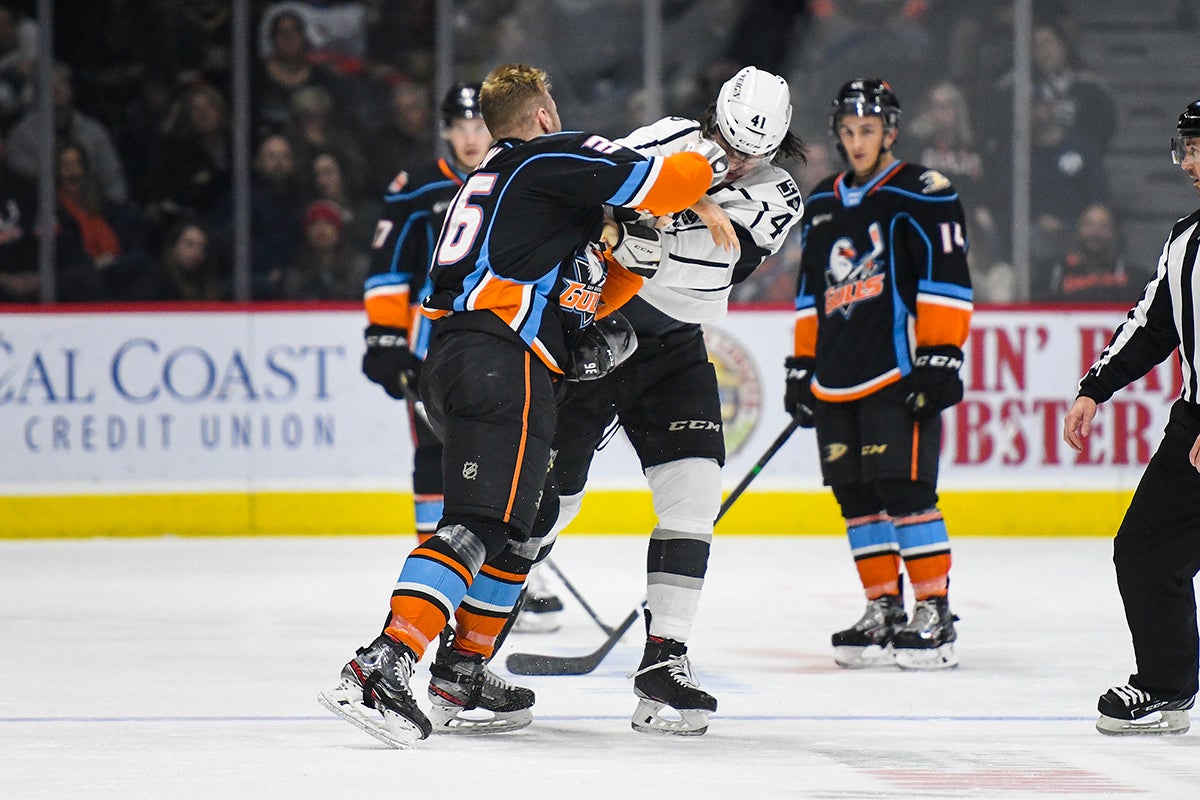 Along with the growth of the AHL, developing players and consistent communication is an easier hands-on approach for these organizations. With a closer proximity, the face-to-face interactions are much more impactful for both the players and the NHL staff working with the prospects.

“Having a farm team that is just down the road makes our jobs a lot easier,” said Ducks Director of Player Development Todd Marchant. “I live in Anaheim, and for me to pop down on a Wednesday night opposed to when we used to be in Syracuse or Norfolk, you get to see them live more often (in San Diego). That’s the most important takeaway you can have. I’ll go down and players will see me before a game, and we’ll chat a little bit. Every once in a while, you get a phone call, maybe the next day, ‘hey what did you think of how I played’ and stuff like that.”

Listen to Marchant talk player development in a recent episode of Gullscast.

The Reign have an advantage of practicing in the same facility as the Kings in El Segundo. On the surface, the change meant the team will practice and live in the South Bay while playing games 60 miles east in Ontario, but the underlying benefit comes through player development, more consistent ice time and a desire to better unify the Kings and Reign as one organization.

Ontario Reign General Manager Richard Seeley sees the immediate benefits to this from both perspectives.

“Anytime there is an opportunity to be recalled by the Kings, you want your name in the hat. With having our American League players in the same training facility that our NHL coaching staff and management staff, they are able to watch our America League guys on a daily basis on and off the ice,” said the second-year GM. “I think that is really want you want an American League player and I think it’s been really good. From an operations standpoint our management has really good idea what we have under pro contract whether playing in Ontario or in LA. There has been a lot of synergy and continuity.”

In addition to the proximity, the rivalry itself pushes players in a high-pressure situation. The competitiveness between the two clubs is a showcase opportunity for a player to rise to the occasion when the intensity brings its highest tempo. 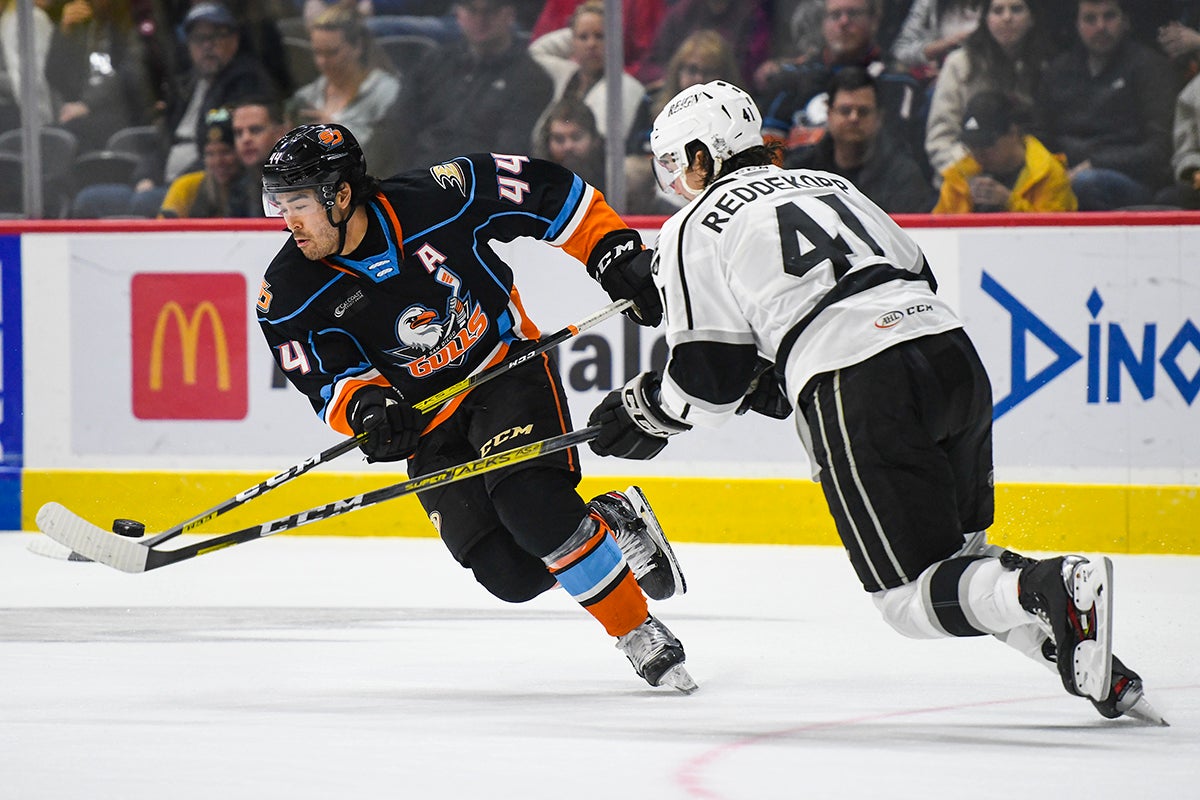 In the past five seasons, the Gulls hold an overall record of 33-19-5 against the Reign. Despite holding the advantage in the win and loss column, there is rarely a game that is out of reach in the final minutes.

Even the players are aware nothing can be taken for granted when on the ice against each other.

“The games between us and the Reign are always physical and tight,” said Gulls forward Corey Tropp. “Something new and exciting always happens when we play each other.”

Watch some of the greatest moments of the rivalry!

That statement held true when, in 2017, the two teams met in the Pacific Division Semifinals. The Gulls and Reign went the distance, meeting in a do-or-die Game 5. This was the only game in Gulls history that has seen a “win or go home” situation. San Diego was able to capitalize with a victory and move on to the next round, collecting redemption from the year prior. In 2016, the Reign defeated the Gulls in a best-of-seven series to claim the Pacific Division Finals series by a 4-1 margin.

“It’s always a great game against Ontario no matter where the teams are in the standings,” said Eakins. “It’s such a great, great rivalry with a lot of physical play and verbal jousting going on out there. I think it’s good. The Ducks and Kings are a massive rivalry and I love that we’ve got it going here, too. As much as there is a great rivalry there, there is a great very great respect from our side, from me, for that entire organization.”

Because of the aforementioned factors, players from both organizations excelled in their development from the AHL to the NHL. Between the two AHL clubs, a total of 101 players skated in at least one NHL game over the past five seasons. Fifty-nine of those players appeared in a game for both San Diego and Anaheim. 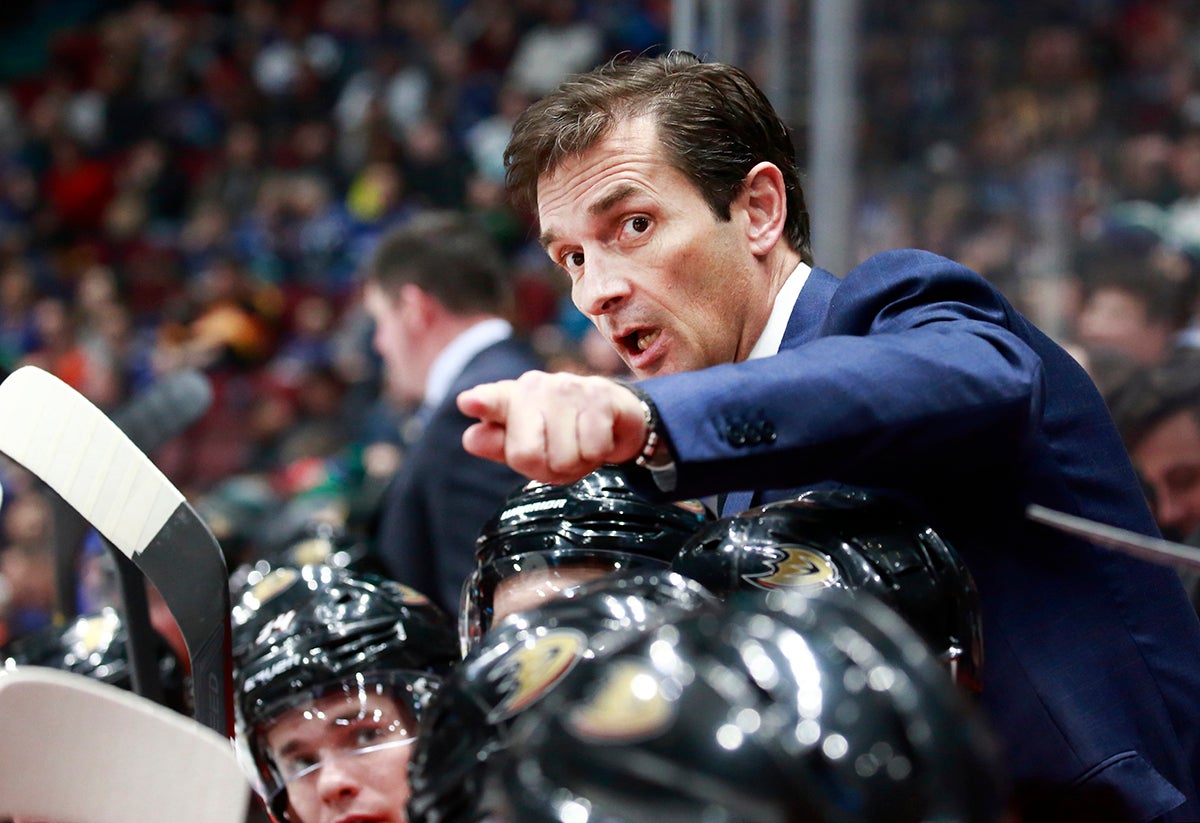 In addition to player development, a winning culture is paramount from top to bottom in an organization. Both the Gulls and Reign qualified for the Calder Cup Playoffs in three of the four completed seasons to date, with each making an appearance in the Western Conference Finals.

When examining these two AHL organizations from a business standpoint, there is mutual respect for each side. The on-ice product also paves way for massive success to each team. This includes ticket sales, merchandise and concession revenue for each team. Aside from the regular season, even the 2020 All-Star Classic in Ontario gave San Diego fans a chance to support the league with more than an entire section of representation.

“I love seeing Ontario on our schedule, especially on a Friday night,” said Gulls President of Business Operations Matt Savant. “When Ontario shows up, the masses show up. The Reign have been a successful franchise on the ice which always leads to a better ticket sales situation. As we all know, the Gulls have been great on the ice since we got here in 2015.

“From a business standpoint, year-over-year, Ontario and San Diego are on the top of the list from a ticket sales, branding, and merchandise. There’s a real passion that does leads to increased revenue and exposure for both teams.” 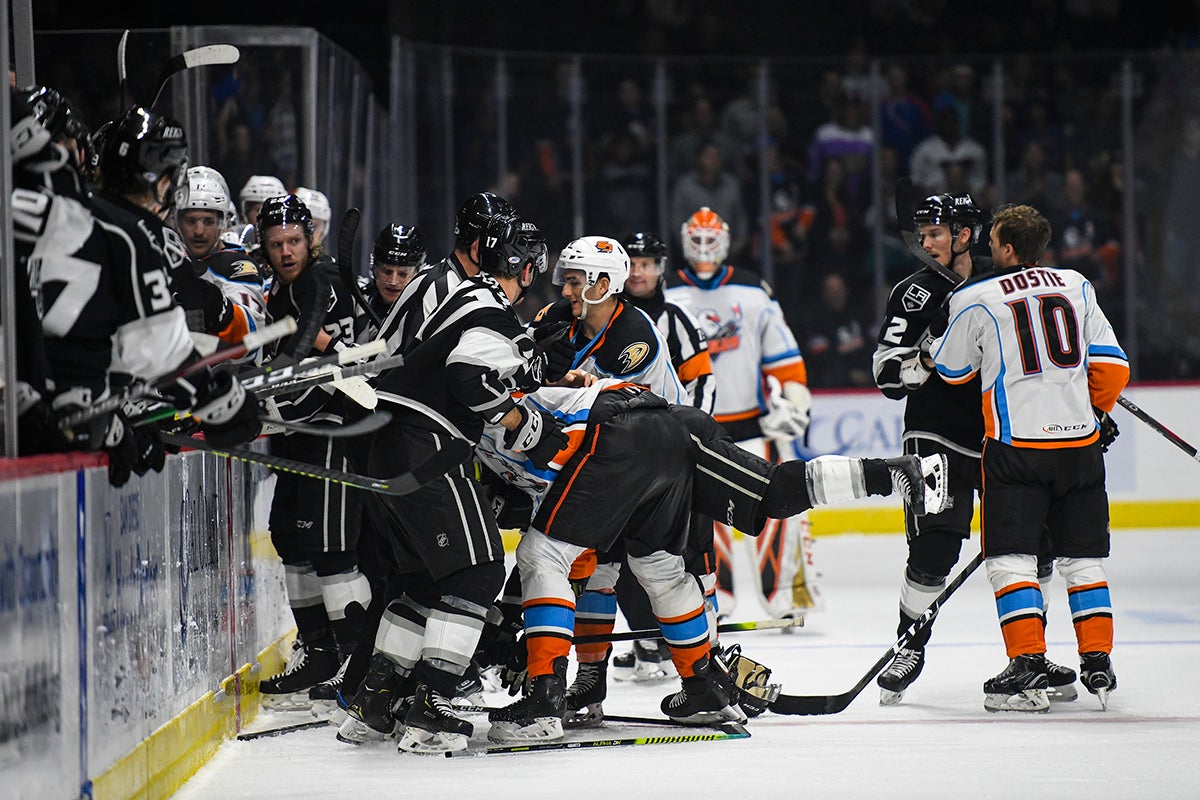 There is no end in sight to the intensity and high-level talent between these two clubs. In the upcoming draft, the two clubs will select in the first six picks, with the Kings holding the second overall selection and the Ducks sitting at sixth. In addition, the pipeline is loaded, with each organization on the upswing.

For the Ducks, the attention turns toward several prospects who will be turning pro, such as goaltender Lukas Dostal, and forwards Benoit-Olivier Groulx, Jack Badini and Trevor Zegras.

“It’s the same three words that we say to every single young prospect: bigger, stronger, faster,” Marchant added. “Zegras has something that’s very difficult, or impossible, to teach, and that’s his hockey sense. The way that he sees the game and the way that he processes it, he has a unique set of hockey skills to go with it.”

The Kings have the second overall selection in the upcoming draft that will bode well with the already bolstering prospect pool that includes Alex Turcotte, Akil Thomas and Tyler Madden. All three players are expected to turn pro in the upcoming season and begin a path that could be impactful for the organization.

“There is a lot of youth and high-end skill coming in but there is a lot of work too,” Seeley mentioned. “These players coming in have had some good accolades and good experience up to this point. They are embarking on a new chapter whether that be starting with the Los Angeles Kings, but I suspect a majority of them will need some time in Ontario and that’s just the nature of it. I’m in belief that one of the biggest jumps that you have in pro hockey in coming into the American League whether that be from the pro leagues in Europe, the junior league in Canada or NCAA.

“I think it’s a big jump just to being a pro and playing everyday being productive in the America League is a big challenge for these guys. I think you see a lot of that development curb early on in their first year. It’ll be exciting to see these guys navigate through that. There will be some bumps in the road and those to be expected but our guys will be better off for those bumps.”

The foundation built in the NHL between Anaheim and Los Angeles will no doubt continue to impact the AHL for years to come between San Diego and Ontario. The proof is in the pudding, with the detailed history made between these two clubs over just five seasons.

The rivalry will be exhilarating and brimming with talent for seasons to come.

“There is a genuine rivalry, dare I say discontent for the Ontario team. It goes back to the Ducks and the Kings,” noted Savant. “The two parent clubs have battled for years in and out of the playoffs. It trickles down for sure to Ontario and San Diego. From a business standpoint I love Ontario vs. San Diego games, especially in San Diego. Because the Ontario fans do come down, but our San Diego fans rise up. They show up, they are proud, and they are loud. It’s something you don’t want to miss, especially on a Friday night.”

When the next season begins and fans are allowed to attend professional sporting events again, the first matchup between the Gulls and Reign will be one circled on several calendars. The hype delivers time and again, and the thirst for hockey returning to their respective cities is at an all-time high during the pandemic.

When you attend a game between the Gulls and the Reign, you’ll buy the whole seat, but only use the edge.