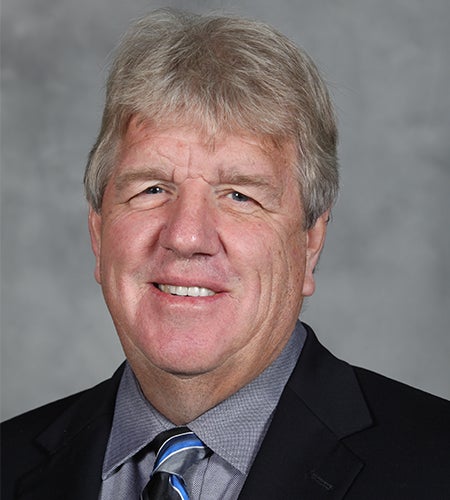 Bob Ferguson enters his 14th season with the Anaheim Ducks organization and seventh in the San Diego Gulls Hockey Operations department. Ferguson is a hockey lifer, having been involved in either professional or amateur hockey for the past 41 years, either as a player, coach or member of a front office.

In his six seasons as General Manager (2015-21) with the Gulls, Ferguson helped build teams that have a combined 210-131-22-10 record to lead the Pacific Division in all-time wins, points (452) and points percentage (.606%, min. two seasons) since the division’s inception in 2015. The Gulls are the only Pacific Division club to finish among the top four teams in all six AHL seasons. Ferguson has also led San Diego to three Calder Cup Playoffs appearances, including the club’s first appearance in the Western Conference Finals in 2019.

The Gulls (three times), Toronto Marlies (four times) and Hershey Bears (three times) are the only AHL teams to advance to the Division Finals on three-or-more occasions since the inception of the current division format in 2015. Under Ferguson, San Diego owns the most playoff wins (18) and series wins (4) among Pacific Division teams.

The 2016-17 club went 43-20-3-2 for 91 points, second in the Western Conference and third in the AHL, while defeating Ontario in the first round of the postseason before falling in the Pacific Division Finals to San Jose (five games). The Gulls were named winners of the 2016-17 President’s Award as the AHL Team of the Year, given to an AHL organization for overall excellence as voted on by AHL team presidents. In the club’s inaugural season in 2015-16, the team finished with a 39-23-4-2 record for 84 points, earning second place in the Pacific Division and the club’s first berth in the Calder Cup Playoffs. Under Ferguson’s guidance, San Diego won its first-ever playoff series over the Texas Stars, 3-1, prior to falling to Ontario in the second round (five games).

Ferguson was the Assistant General Manager of the Norfolk Admirals for the previous three seasons (2012-2015) and prior to that manned the same position for the Ducks’ prior AHL affiliates, the Syracuse Crunch (2010-12) and Iowa Chops (2008-09). He also spent one season as a college/amateur scout for the Ducks in 2009-10.

Before joining the Ducks organization, Ferguson spent 26 seasons on the bench as a head coach in the professional and junior ranks. He had head coaching stints with Augusta (ECHL, 2005-08), Florida (ECHL, 1998-2001) and Indianapolis (IHL, 1995-98). In his nine seasons as a professional head coach, Ferguson’s teams never missed the playoffs. He is a two-time John Brophy Award winner as ECHL Coach of the Year, winning the honor in consecutive seasons with the Florida Everblades in 1998-99 and 1999-2000.

A native of Kingston, Ontario, Ferguson’s illustrious 17-year career as a head coach in the United States Hockey League (USHL) with Sioux City (1981-90) and Des Moines (1990-95, 2001-04) garnered 517 career wins, the third-most in league history. Ferguson guided Sioux City to a pair of Clark Cup championships and won three Clark Cups with Des Moines. He is a three-time Gold Cup winner (U.S. Junior ‘A’ National Champion), five-time USHL Coach of the Year and five-time USHL General Manager of the Year.

Jillian Reddin, daughter of Susan and Henry Samueli, enters her 13th season with the Anaheim Ducks organization, her seventh with the San Diego Gulls. Primarily responsible for player contracts, transactions, immigration, travel and the Collective Bargaining Agreement, Reddin regularly coordinates with the Anaheim Ducks Hockey Operations department. She is also an Alternate Governor for the AHL Board of Governors.

Reddin previously spent three seasons in the same role with the Norfolk Admirals (2012-14) and two with the Syracuse Crunch (2010-12). Prior to her stint with Anaheim’s AHL affiliates, Reddin spent a year in the Ducks front office.

A native of Newport Beach, Calif., Reddin received a degree in Merchandise Marketing from the Fashion Institute of Design & Merchandising (Los Angeles).

Jillian and her husband, Colin, reside in Encinitas.

Prior to joining San Diego, Goduti spent eight seasons with the Norfolk Admirals (2007-15) as Hockey Operations Assistant and Business Manager. Goduti was part of the hockey operations staff during Norfolk's Calder Cup championship in 2012.

A native of Newport News, Va., Goduti earned a bachelor's degree in Accounting from Radford University while playing club hockey for the Highlanders.

Jeff, his wife Michelle, and their daughter Harper, reside in Poway.

Named to his current position on July 9, 2021, Bouchard spent the past three seasons as the head coach of the Montreal Canadiens' primary development affiliate in Laval, guiding the club to an 83-67-14-10 record. He led the Rocket to a 23-9-3-1 record in 2020-21 to win the Frank S. Mathers Trophy as winners of the Canadian Division while posting the second-highest points percentage in the AHL (.694).

A native of Montreal, Quebec, Bouchard spent seven seasons from 2011-18 as general manager of the Blainville-Boisbriand Armada of the Quebec Major Junior Hockey League (QMJHL), while also serving as head coach from 2014-18. In 272 games behind the Armada bench, he posted a 160-80-23-9 record, including consecutive QMJHL President Cup Finals appearances in 2017 and 2018. He also served as an assistant coach with the Montreal Junior of the QMJHL from 2008-11 before the franchise relocated to Blainville-Boisbriand in 2011.

Internationally, Bouchard served as the general manager of the Canadian National Junior Team for two years, assembling a roster that won a gold medal at the 2018 World Junior Championship and silver in the 2017 tournament.

Selected by the Calgary Flames in the sixth round (129th overall) of the 1992 NHL Draft, Bouchard played in 364 career NHL games with Calgary, Nashville, Dallas, Phoenix, New Jersey, New York Rangers, Pittsburgh and New York Islanders, recording 22-53=75 points. He also appeared in 293 career AHL games, earning 37-108=145 points while being named an AHL All-Star in 1994-95 and 1995-96. Bouchard helped Canada to gold medals at the 1997 World Championship and back-to-back World Junior Championships in 1993 and 1994.

Daniel Jacob enters his first season as Assistant Coach for the Gulls. Jacobs joins the Anaheim Ducks organization after serving as Assistant Coach with the Laval Rocket under head coach Joel Bouchard for three seasons (2018-21). Jacobs helped guide Laval to an 83-67-14-10 record, including a 23-9-3-1 record in 2020-21 to win the Frank S. Mathers Trophy as winners of the Canadian Division while posting the second-highest points percentage in the AHL (.694).

Prior to his stint with Laval, Jacob worked alongside Bouchard in the same capacity to lead the Blainville-Boisbriand Armada to back-to-back President Cup Finals appearances in 2016-17 and 2017-18. With Jacob on staff, the Armada never missed the playoffs, posting an impressive 160-80-18-14 record, and winning the Jean-Rougeau Trophy in 2017-18 as the QMJHL's regular season champions. Jacob also joined Bouchard’s coaching staff for the gold medal-winning Men's National Under-17 Team at the 2017 Ivan Hlinka Memorial Tournament.

Prior to making his coaching debut, the St-Jean-sur-Richelieu native suited up for four seasons with the McGill University Redmen where he recorded 16-21=37 points and 369 PIM in 108 contests. The former defenseman also sported the colors of the AHL's San Antonio Rampage and Austria's Innsbruck HC before closing out his playing career. Jacob graduated from McGill University with a kinesiology degree and served as director of the McGill Redmen Hockey School for four years.

Max Talbot begins his first season as Assistant Coach for the Gulls. Talbot joins the Anaheim Ducks organization from the Creative Artists Agency where he spent two years as a Player Development Consultant following a 15-year professional hockey career.

Originally selected by the Pittsburgh Penguins in the eighth round (234th overall) of the 2002 NHL Draft, Talbot is a veteran of 704 career NHL games with Pittsburgh, Philadelphia, Colorado and Boston. He recorded 91-113=204 points and 495 penalty minutes (PIM) from 2005-2016. He also collected 18-21=39 points in 84 career postseason games, leading Pittsburgh to a Stanley Cup championship in 2009, scoring the Stanley Cup-clinching goal in Game 7 as part of a two-goal performance.

Austin Violette enters his third season as Video Coordinator with the San Diego Gulls. In his first two seasons, Violette helped the club to back-to-back top-four finishes in the Pacific Division with a combined 56-36-7-2 record.

Violette joined the organization after serving as Video Coach/Assistant Coach for the Maine Mariners of the ECHL in 2018-19. A native of Gorham, Maine, Violette helped the Mariners to a 37-32-2-1 record for 77 points in his first season in a hockey operations role.

Joey Guilmet is in his fifth season as Head Equipment Manager of the Gulls and his ninth season in the Anaheim Ducks organization. A native of Ocean Beach, Calif., Guilmet has 20-plus years of experience between the NHL and AHL. He most recently spent two seasons as equipment manager for Arizona State University’s men’s ice hockey program. He was named to ASU’s staff prior to their inaugural NCAA Division I season in 2015-16.

Guilmet spent four seasons working as the equipment manager for Anaheim’s primary AHL affiliate with the Norfolk Admirals (2012-15) and Syracuse Crunch (2011-12). He spent 12 seasons with the Atlanta Thrashers in the NHL (2000-2011) and nine seasons in the International Hockey League, splitting time with the Orlando Solar Bears (1995-99) and San Diego Gulls (1991-95). Additionally, Guilmet was an equipment manager at the 2007 NHL All-Star Game and the 1992 MLB All-Star Game.

Guilmet has represented Team USA on five occasions, serving as part of the staff at the 2006 Winter Olympic Games as well as three IIHF Men’s World Championships (2001, 2008, 2009). He was the equipment manager for Team USA’s gold medal team at the 2017 World Junior Championships.

Guilmet received a degree from Mesa College in San Diego, and Gwinnett Tech in Duluth, Ga. He earned his certification in the Athletic Equipment Managers Association (AEMA) in 1995. Additionally, he conducted a workshop demonstrating equipment repair for professional and college equipment managers at the 2006 AEMA Meetings and also hosted a workshop on carbon fiber/kydex skate guard protection at the 2008 Society of Professional Hockey Equipment Managers Meeting. Guilmet is currently working on his bachelor’s degree in Organizational Leadership at Arizona State University.

Ryan Tall enters his sixth season as Assistant Equipment Manager of the San Diego Gulls where he handles the club’s equipment needs. Tall was named to his post in March 2017. He was most recently the Head Equipment Manager of the Utah Grizzlies in 2016-17, Anaheim’s affiliate in the ECHL, and represented the club as an equipment manager at the 2017 ECHL All-Star Game. He also served as an intern in the equipment department with the Grizzlies from 2014-16.

Ryan Ledwon enters his first season as Head Athletic Trainer for the San Diego Gulls after serving as the team’s Assistant Athletic Trainer the previous three seasons. Ledwon oversees injury prevention and injury rehabilitation, while working closely with team physicians and strength and conditioning coaches to ensure the safety and well-being of the club’s players.

Ledwon joined San Diego following two seasons with the National Hockey League Department of Player Health Management from 2016-18 and previously served as the Head Athletic Trainer with the Dubuque Fighting Saints of the USHL (2015-16).

A native of Melrose Park, Pennsylvania, Bernstein is a Certified Athletic Trainer through the NATA’s Board of Certification, a Corrective Exercise Specialist through the National Academy of Sports Medicine and is Graston Technique certified.

Caylin Relkoff begins his first season as the Gulls’ Head Strength and Conditioning Coach, working with the team and coaches to ensure the overall fitness, strength and conditioning, nutrition and supplementation programs of the club’s players.

Relkoff previously spent seven years with Crash Conditioning (2014-2021) in Calgary, Alberta as their Senior Performance Coach and Head of Hockey Development. He also served as the Strength and Conditioning and Sports Science Intern for the Calgary Flames during the 2019-20 NHL season.

Relkoff, an NSCA certified Strength and Conditioning Specialist (CSCS), earned a master’s degree in Exercise Physiology from the University of Calgary and a bachelor’s degree in Human Performance and Health Promotion from Morrisville State College while playing NCAA Division III hockey for the Mustangs.

An original member of the AHL Gulls, Colin Reddin enters his seventh season with the San Diego Gulls, working with Head Strength and Conditioning Coach Caylin Relkoff to ensure the overall fitness, strength and conditioning, nutrition and supplementation programs of the club’s players.

A native of Corona Del Mar, Calif., Reddin and his wife Jillian reside in Encinitas.