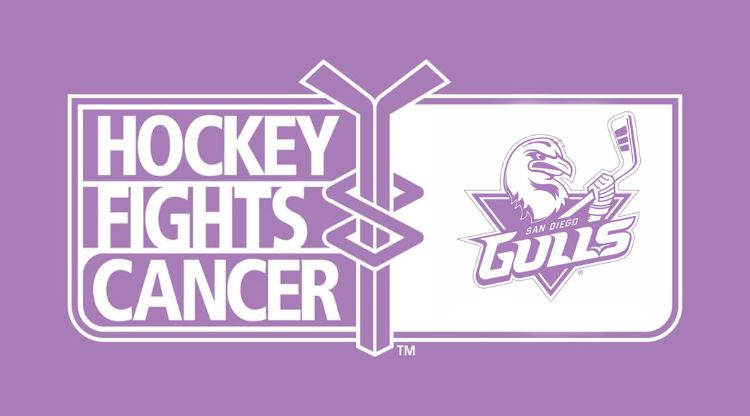 The campaign, which has been uniting the hockey community in support of cancer patients and their families since 1998, will feature special events, observances and stories from people around the hockey community. This year, 21 AHL member clubs are designating a home game as a Hockey Fights Cancer awareness night with the opportunity to include lavender jerseys, dasherboards, stick tape, helmet decals and “I Fight For” cards. In addition, the AHL will be supporting the Hockey Fights Cancer initiative during the 2019 AHL All-Star Challenge in Springfield, Mass., in January.

The San Diego Gulls will host the club’s inaugural Hockey Fights Cancer night on Friday, Nov. 23. The Gulls will wear a specialty jersey all game accented by the lavender color that represents Hockey Fights Cancer. The game-worn jerseys will be auctioned following the game with all proceeds donated to the American Cancer Society. To get your tickets, CLICK HERE.

About the American Cancer Society

The American Cancer Society is a global grassroots force of 1.5 million volunteers dedicated to saving lives, celebrating lives, and leading the fight for a world without cancer. From breakthrough research, to free lodging near treatment, a 24/7/365 live helpline, free rides to treatment, and convening powerful activists to create awareness and impact, the Society is attacking cancer from every angle. For more information go to www.cancer.org.

About the Canadian Cancer Society

At the Canadian Cancer Society (CCS), our vision is a world where no one fears cancer. With the support of our volunteers and donors, we improve and save lives by taking a comprehensive approach to our work against more than 100 types of cancer. CCS funds research, provides services to those living with cancer, advocates on important cancer-related issues and educates and empower people to make healthy choices. For more information, visit cancer.ca or call our toll-free bilingual Cancer Information Service at 1-888-939-3333.