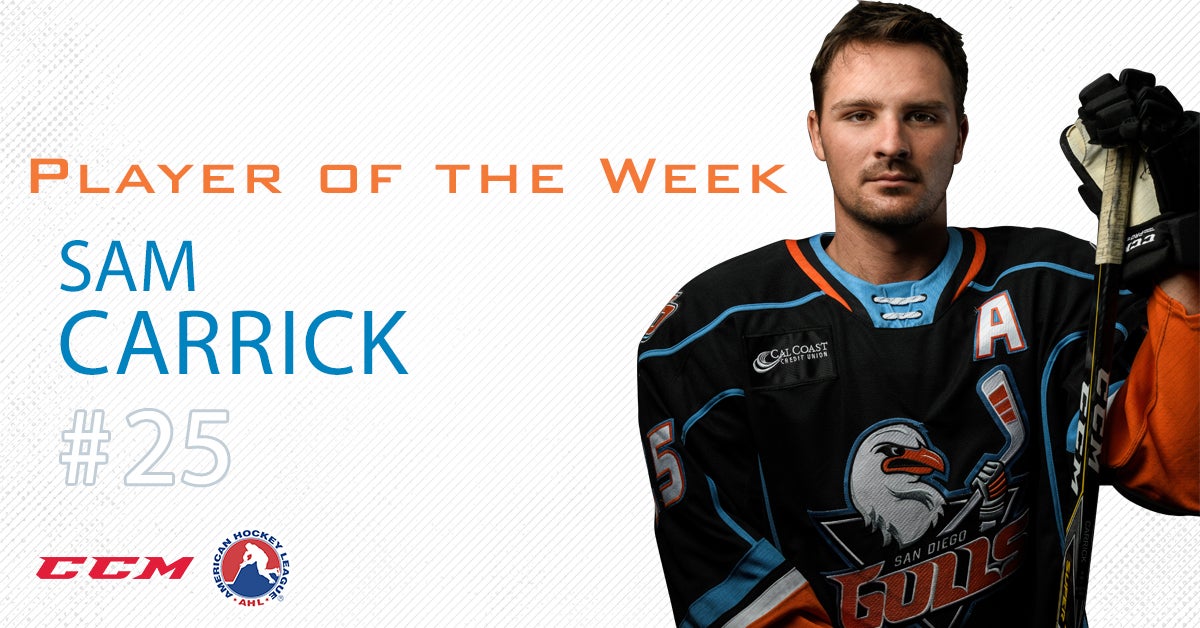 The American Hockey League (AHL) announced today that San Diego Gulls forward Sam Carrick has been selected as the CCM/AHL Player of the Week for the period ending Jan. 13, 2019.

Carrick, 26 (2/4/92), posted back-to-back three-point games last week, totaling two goals and four assists as the Gulls extended their winning streak to eight games, longest in the AHL this season, and set a club record with points in 13 straight game (11-0-0-2).

On Wednesday night in Stockton, Carrick notched a goal and two assists to help San Diego to a 7-4 victory over the Heat. And on Saturday, he reached the 20-goal mark for the first time in his career and registered two more assists as the Gulls defeated Milwaukee, 5-2.

Carrick ranks third in the AHL in goals (20), fifth in points-per game (1.23, min. 20 games) and tied for 11th in points (37) in 30 games for San Diego this season, his seventh professional campaign. A native of Markham, Ont., Carrick has also appeared in three contests with the Anaheim Ducks in 2018-19, San Diego’s primary affiliate in the National Hockey League (NHL). Originally selected by the Toronto Maple Leafs in the fifth round (144th overall) of the 2010 NHL Draft, Carrick has skated in 361 career AHL games with San Diego, Rockford and Toronto, notching 88-129=217 points, while adding 1-1=2 points in 22 NHL appearances with the Ducks and Maple Leafs.

In recognition of being named the CCM/AHL Player of the Week, Carrick will be presented with an etched crystal award prior to an upcoming Gulls home game.