Troy Terry honing his all-around game for the San Diego Gulls is the definition of development: the act or process of growth.

With a resume as noteworthy as Terry’s, one wouldn’t expect to hear development as a necessity for the 21-year old forward. Selected by the Anaheim Ducks in the fifth round (148th overall) of the 2015 NHL Draft, Terry won a gold medal with Team USA at the World Junior Championship in 2017, a NCAA national championship with the University of Denver in 2017, and became an Olympian when he represented Team USA at the 2018 Winter Olympic Games in PyeongChang, South Korea.

Following five assists in five games at the Olympics and then the conclusion of the Pioneers collegiate season, the Denver, Colo. native signed his entry-level contract and made his NHL debut with Anaheim last season, appearing in two games with the Ducks. He began the 2018-19 season with the Ducks, going scoreless in six games but scored his first career game-deciding goal in a shootout to help lead Anaheim to a 3-2 win over the Detroit Red Wings on Oct. 8. 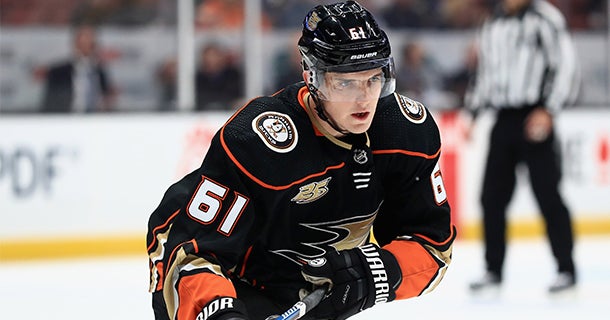 The AHL is the primary development league for the NHL is just that, a place to develop for players. The new Gulls forward is no different. The AHL is a place for prospects to gain confidence, play more minutes and in key situations, and do so in an environment that provides opportunity. It’s a place curtailed to develop players to become full-time NHL regulars. On Oct. 19, Terry was assigned by Anaheim to San Diego for those very reasons.

“This is my first year of pro hockey and mentality is the biggest thing. I’ve been trying to adjust to that,” said the 6-1, 178-pound forward. “I wasn’t playing bad hockey when I was (in Anaheim), I just wasn’t playing at the level I know I can play at. A big part of my game is producing and I was starting to get frustrated and starting to change who I was. So that’s kind of why I am down here, just to find myself again and get that confidence back as a player and that was something I was excited for.”

The same day he was assigned to the Gulls, Terry was put in a situation to succeed, slotted as the top line right wing in his AHL debut. Not one to sulk, Terry rose to the occasion, scoring two highlight-reel goals, including the game-winning goal with under two minutes left in regulation. He added an assist for a three-point effort, and followed up the very next night with another goal and assist. 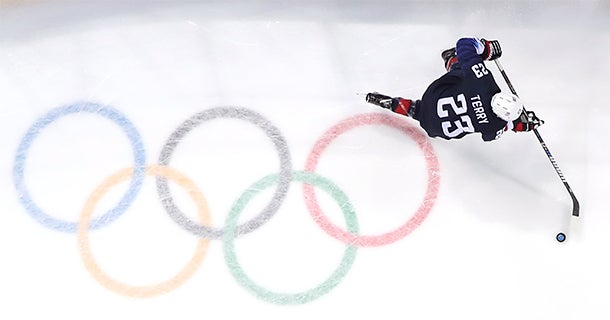 Some young players who have been the best player on their respective teams at every level could have a hard time adjusting to starting their career in the NHL and then find themselves a step below with the goal to fine-tune their game. Not Terry.

“I’m trying to keep a positive mind about all this. I don’t look at it as a demotion, I look at it as they’re trying to help me find my game and really get used to the pro-level because this is my first year pro,” said Terry. “The part I was excited about, just to come down here and have more opportunity to get things going. I was excited for it coming in and I had a positive mindset. [The first] weekend was a lot of fun and I think it was really good for me.”

The transition to becoming a professional is different for every player, despite the previous success at other levels of hockey. Some players develop faster than others, some have a quick path due to opportunity, and some are blocked by either depth in an organization or the patience from a staff to ensure they’re fully ready for the rigors of the pro level. 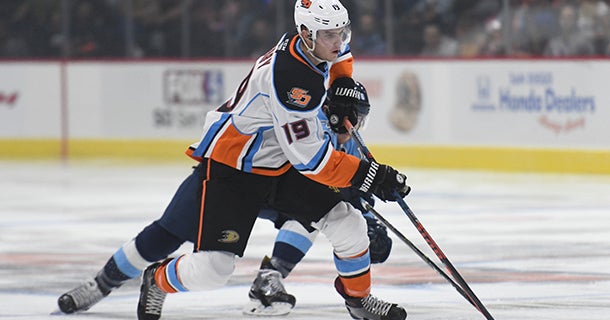 For the former Denver Pioneer, the transition has been hard. In collegiate and junior hockey there are other focuses that take away from the game, such as classes, family and friends. Once a player turns pro, everything revolves around good habits and preparation. It’s a lifestyle now.

“It’s been hard, it’s different than college. In college you’re going to class with the guys on your team all day, you live with them, spend all day with them and here it’s a little different,” he said. “You have to learn to manage your time and your lifestyle.”

Another adjustment is dealing with expectations. There were expectations with Team USA at both the World Juniors and Olympics, and also at a top collegiate program in Denver. But, as a top prospect, there is an expectation from an entire organization and a fan base to be the guy, or produce right away.

“I did feel that in Anaheim and I felt like I was getting there,” Terry said on dealing with the pressure and succeeding despite it. “It was a lot of fun and I was getting more comfortable. I’m down here because I was starting to get a little frustrated because I wasn’t scoring. It’s hard not to feel those feelings of frustration when you’re supposed to be producing and it’s not happening. That’s why I was excited to come down here.”

Through four games to date with the Gulls, the scoring touch has found its way back into his game. Points in all four games (3G/4A) to open his season with San Diego has raised his confidence level and sees him atop the league scoring chart amongst rookies with his 1.75 points-per game second only to Jordan Greenway whose four points in two games rank ahead of Terry.

“I think I always had it there, I was just starting to question the things that I usually do,” added Terry. “It helps when you play your game and the things you were doing and creating work and I was able to get some success from what I was doing. It’s pretty reassuring.”

Terry will continue to build confidence and solidify his game with a group of younger professionals that are each finding their individuality in San Diego. Each of the young prospects plying their trade with the Gulls have been side by side with one another since their draft years where they’ve participated in Anaheim’s development and rookie camps, building chemistry on and off the ice as a group. It’s there where Terry has built a rapport with the other young Gulls who have made his transition in this league that much more seamless.

“There’s still things that I need to work on away from the game and little details. I went through main camp with these guys and a lot of the young guys like Josh Mahura, Max Jones and (Jacob) Larsson. I’ve been going through development camps and all that stuff with them for years now. It’s fun because I’m used to just seeing them at development camp and then that’s the end of it so it’s fun to actually be on a team with them and be playing for something with them, and going to battle with them. It’s fun.”

His first two weeks in the league have been fun. There’s more to be had with the ceiling Terry possesses.