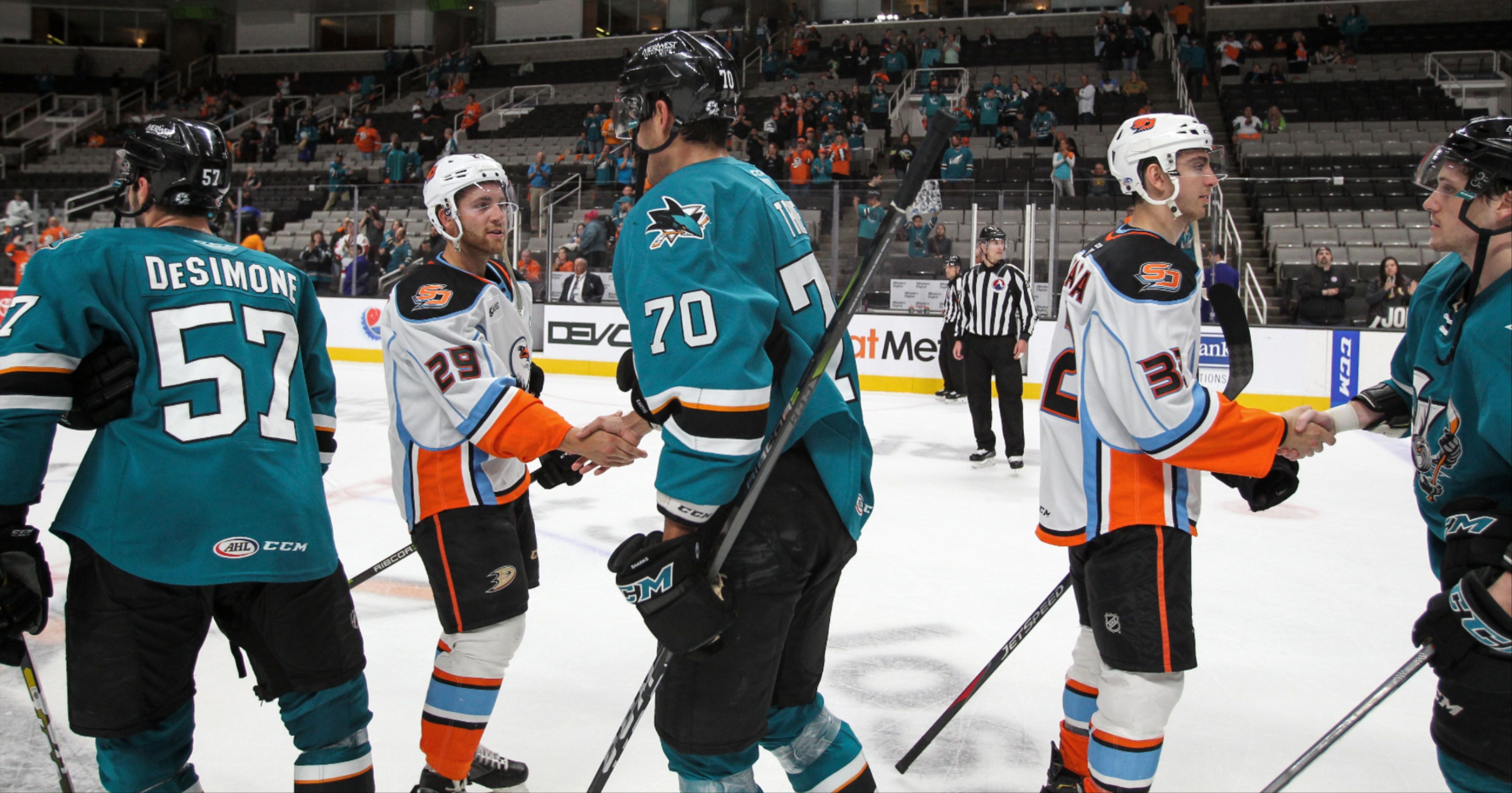 It’s no secret that Gulls fans are considered some of the best in the AHL. The players consistently refer to them as a seventh player out on the ice because of the support that they bring to Pechanga Arena on gamedays. On January 21, the borders of that support were extended to Citizens Business Bank Arena in Ontario as the Gulls televised their first road game in club history. 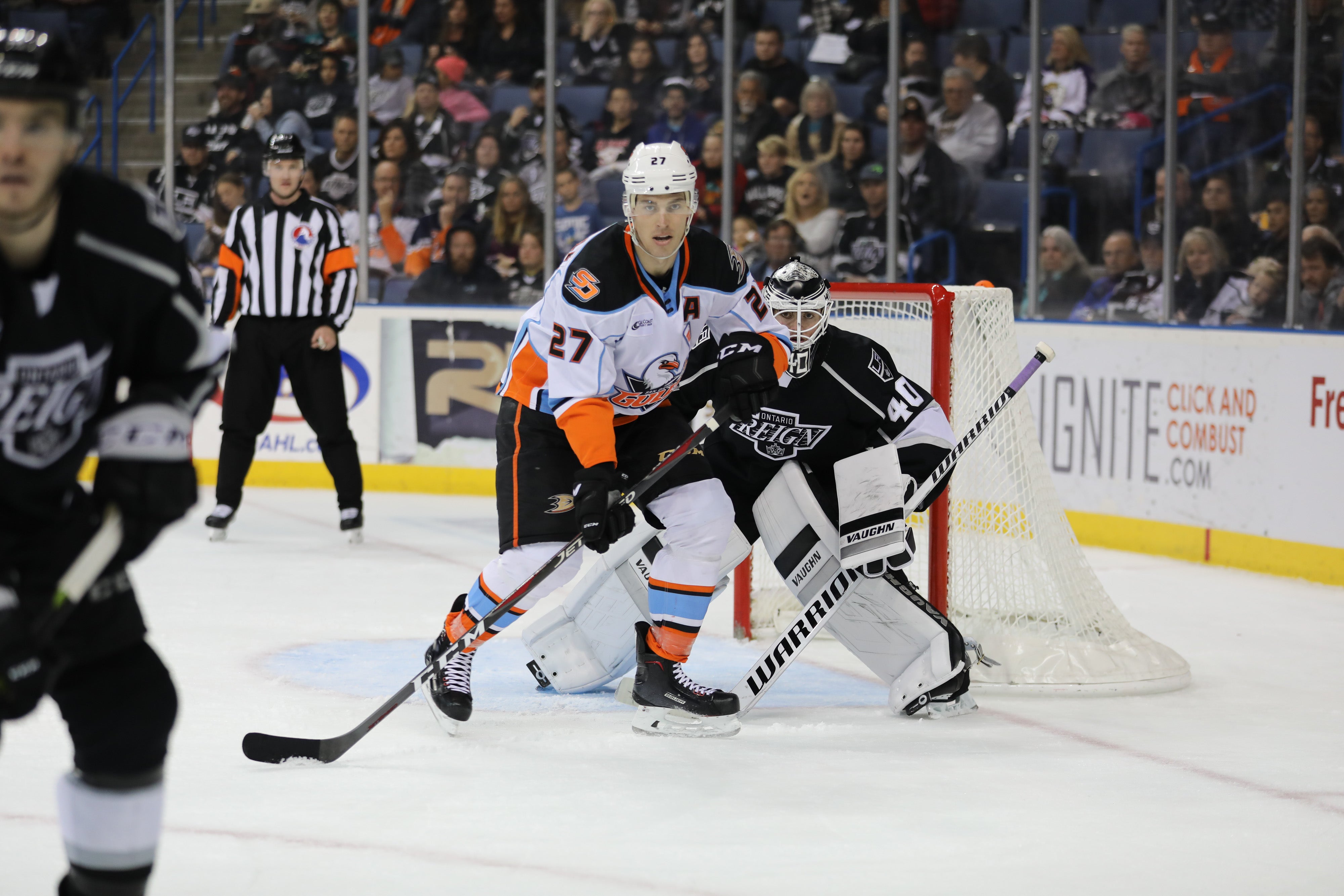 “It’s not cheap to travel, and it’s not cheap for hotel rooms and eating out. That’s not lost on any of us,” said former Gulls head coach Dallas Eakins. “Our players recognize that right away. I love how our players acknowledge our fans. Our support never seems to stop.”

The Gulls surrendered the first goal of the game just 37 seconds into the contest, but fans who made the road trip didn’t waiver. Jake Dotchin, Adam Cracknell, Chase De Leo and Sam Steel scored goals, while Jeff Glass shook off the early goal and stopped every following shot as San Diego prevailed by a score of 4-1. Cracknell’s eventual game-winning goal extended his goal-scoring streak to six straight games, marking both a career-high and a Gulls record.

The road win extended San Diego’s road standings point streak to 10 games, the longest in the AHL at the time. Following the game, the players skated to center ice to salute the heard of fans in attendance. In addition, the fans were able to take a group photo on center ice to keep the memory of invading hostile territory. The two moments were captured on the game’s telecast with Tory Hirsh commenting on the strong presence of Gulls’ fans.

One of the most dominant players for San Diego this season, or any other season, was Sam Carrick. The third year Gull had his best professional season with San Diego this past season, setting multiple career and club records in the process. One of those club records was for points in a single game.

The Gulls were coming off a tough loss to the Stockton Heat in which the game-winning goal was scored with just 12 seconds left in the game. With a chance for revenge, the Gulls traveled to Stockton for a rematch just two days later on November 25. Both teams ranked near the bottom of the league in goals allowed at the time so a high-scoring contest was to be expected. Carrick helped San Diego to an early lead, assisting on rookie defenseman Simon Benoit’s first professional goal. 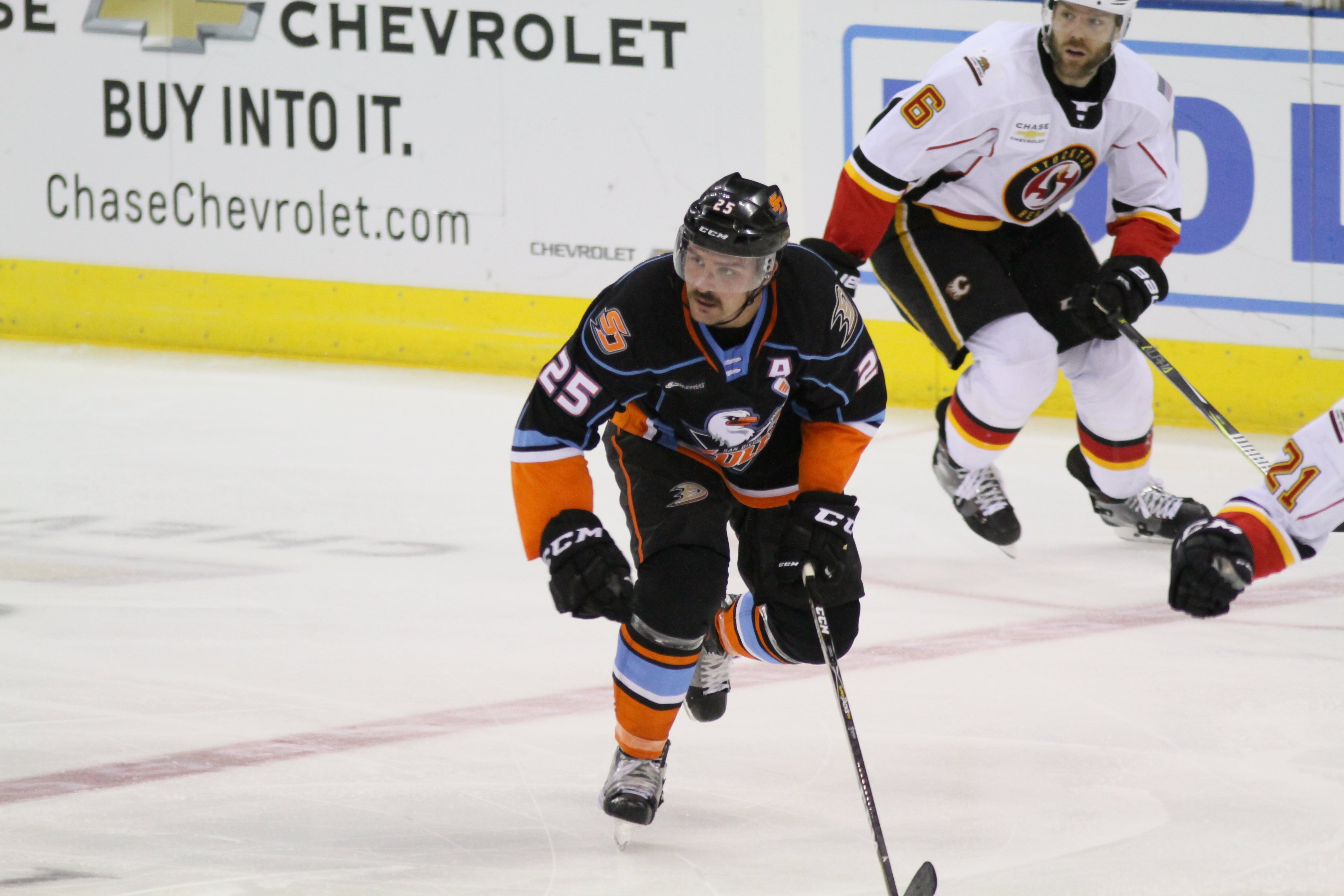 Following his helper, Carrick blasted a one-timer past Heat netminder Nick Schneider on a 5-on-3 power play. An odd-man rush and a forced turnover would result in Carrick’s next two goals, earning him a natural hat trick, three consecutive goals by the same player. His hat trick marked the fourth ever club hat trick in Gulls history as the scores were separated by just 18:05 across the first and second periods. Carrick’s hat trick set a new career high for goals in a game, following eight prior two-goal performances.

Stockton battled back to bring the game to within a goal, but Steel sealed the game with an empty netter and it was assisted by, you guessed it, Carrick. The five-point night set a new career high for Carrick and set a club record for points in a single game.

“It definitely feels good, especially coming after the loss that we had the other night. It just feels good to get the win and be able to hold on to the lead like we did tonight,” said Sam Carrick following the game. “They came with a good push in the third period and there’s still things that we can improve on playing with a lead. At the end of the day, we got the win and that’s what matters.”

In the Gulls four seasons of existence in the AHL, they have qualified for the playoffs three times. The lone instance in which San Diego missed the postseason was the season prior, 2017-18. The 2018 AHL Playoff push came down to the last game, a road contest in Tucson, but the Gulls failed to claim a point and their seasons concluded in April.

A year later, the Gulls found themselves in a similar position, fighting for their playoff lives with a road trip to Tucson to end the regular season. With back-to-back games at the Tucson Convention Center on April 12 and 13, the Gulls need two points to secure a spot in the playoffs. Seven players from the previous season’s bitter end in Tucson were in the lineup heading into the weekend and the impact of their situation wasn’t lost on any of them. 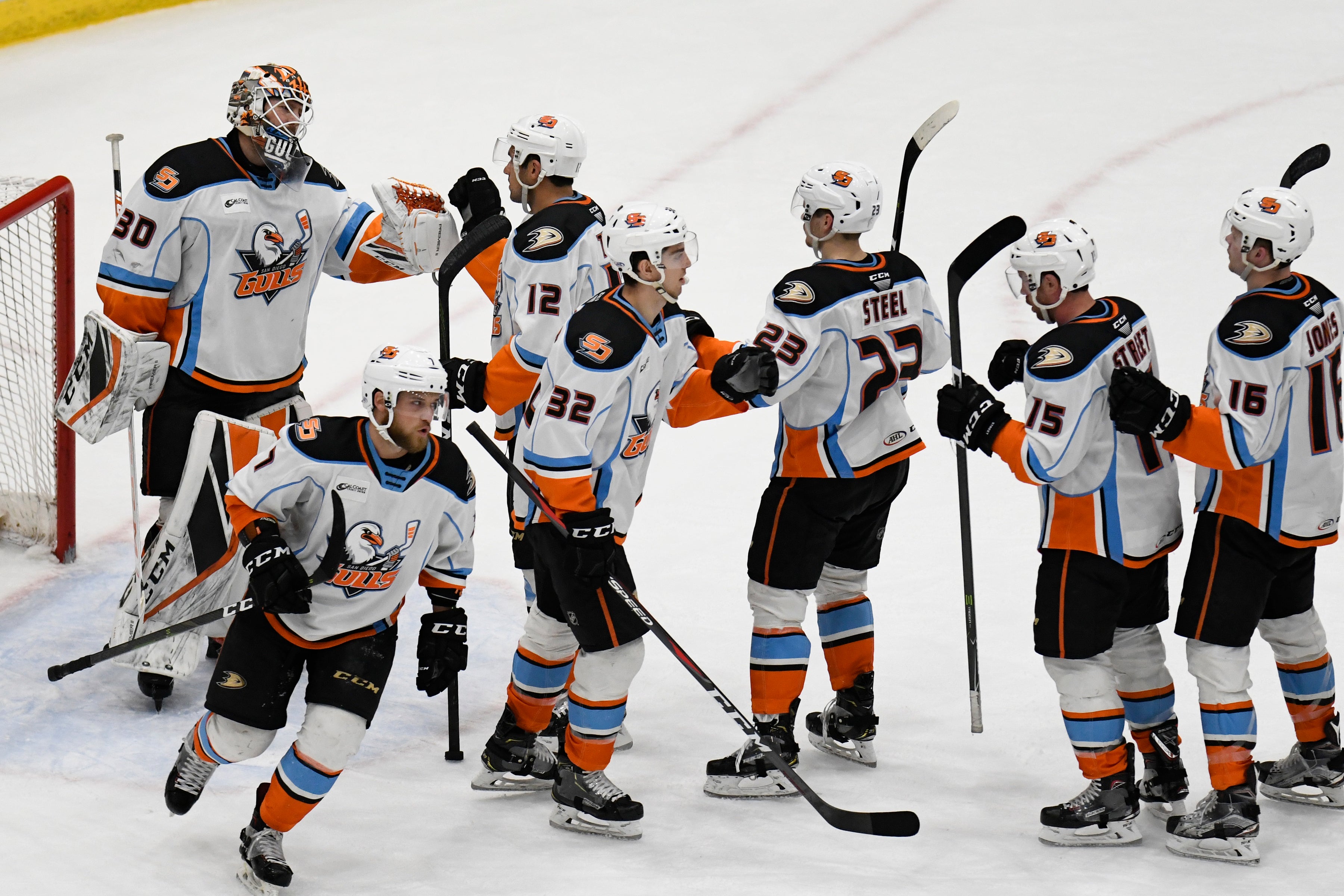 In the first of the two games on April 12, the score was tied after three periods, but a late overtime goal by Conor Garland would give the Roadrunners a chance to bump San Diego out of the postseason push. Before the puck had dropped for final game of the Gulls regular season on April 13, the Gulls secured a spot in the 2019 AHL Playoffs as the Colorado Eagles beat the San Jose Barracuda. Even though the Gulls were already locked in, they proved they deserved the chance to contend for the Calder Cup with a convincing 4-3 win over the Roadrunners.

Three of the returning players held a big factor in the games as Sam Carrick (2G/0A), Corey Tropp (0G/3A) and Kalle Kossila (0G/2A) all contributed throughout the final two games in Tucson.

“It’s amazing how that works out. I don’t if it’s a karma thing or what that is. Coming into this area at this time of the season and quietly, myself, reliving what went on here last year, and now leaving here…I know what they’re feeling over there on that side,” said former Gulls head coach Dallas Eakins. “That team is very well coached by Jay (Varady) and it’s certainly not fun what they’re going through. We’re ecstatic to be here.  As I’m talking to you, I can hear all of our fans that were here that were loud and proud in this arena tonight.”

San Diego has never been eliminated in the First Round of the playoffs. That remained true in the 2019 playoffs when the Gulls beat the Barracuda in Game 4 in San Jose and improved to a 9-4 all-time postseason record.

“It feels good. Obviously, that’s our goal, to go all the way. That’s the first series out of the way,” said Sam Carrick regarding advancing to the Pacific Division Finals. “It’s a good feeling right now, but we know at the same time that it’s only going to get harder from here.”

The Barracuda took an early lead as Alexander True got San Jose on the board just 50 seconds into the game, but Sam Carrick answered with a goal from the slot before the end of the first period. Two more goals were scored by San Diego’s Andy Welinski and Sam Steel in the following 10:57 of the game before Nick DeSimone made it a one-goal game heading into the final frame. 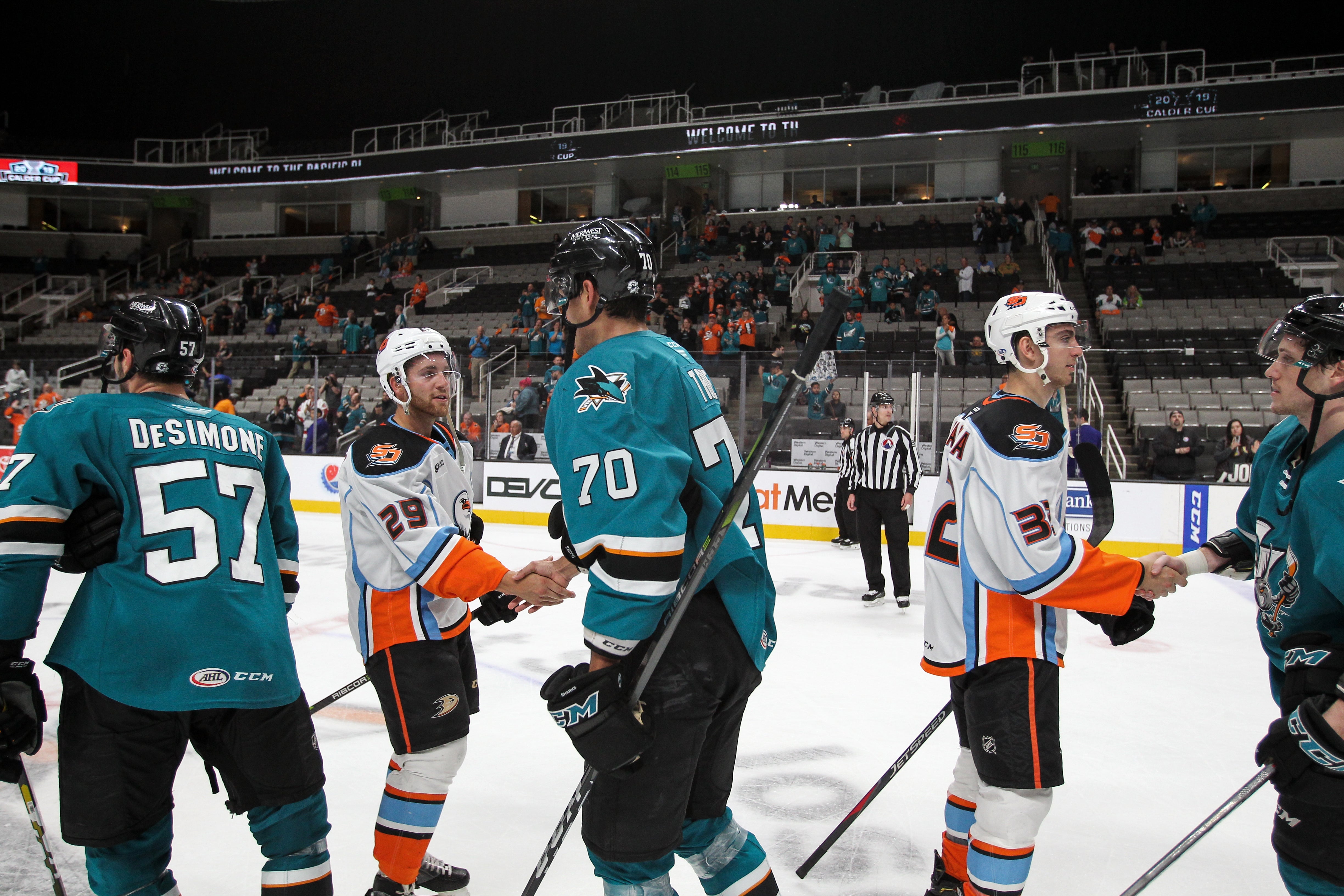 When the third period began, it was yet to be determined whether the series would continue to five games or see the Gulls advance to the Pacific Division Finals. Adam Cracknell made that picture a bit clearer when he redirected Matt Berry’s shot past San Jose goaltender Josef Korenar for a two-goal lead.

With the clock winding down and the Gulls holding the lead, De Leo found the back of the net with Korenar pulled for the extra attacker to seal the series. With his goal, Chase De Leo became the first Gull to score in each of the first four games to begin a postseason and series.

“It’s definitely exciting. We’re a group that has high expectations and this was certainly in our goals,” added Gulls captain Jaycob Megna on the win. “It’s something that we’ve talked about all year. It’s just the next step in the progression here.”

The series-winning game marked San Diego’s third time advancing to the Pacific Division Finals in four seasons. They also became the only team in the division to advance beyond the First Round on multiple occasions while matching Texas (three in 2018) as the only Pacific Division clubs to win three series’ since the division’s inception in 2015.

The 2018-19 season started with Kevin Boyle and Jared Coreau splitting time as the starting netminder for San Diego. Boyle took over that competition on December 15 following a big win over San Jose that marked the beginning of a career high and club-record 10-game win streak.

In his 10th consecutive win, Boyle stopped 21-of-23 shots by Milwaukee in a 5-2 win by San Diego. Over his stretch of 10 wins, Boyle posted a 2.19 goals-against average (GAA) and .923 save percentage (SV%), including four separate games with just one goal allowed. At the time of the win, Boyle owned a 15-5-0 record, ranking third among AHL leaders in wins. 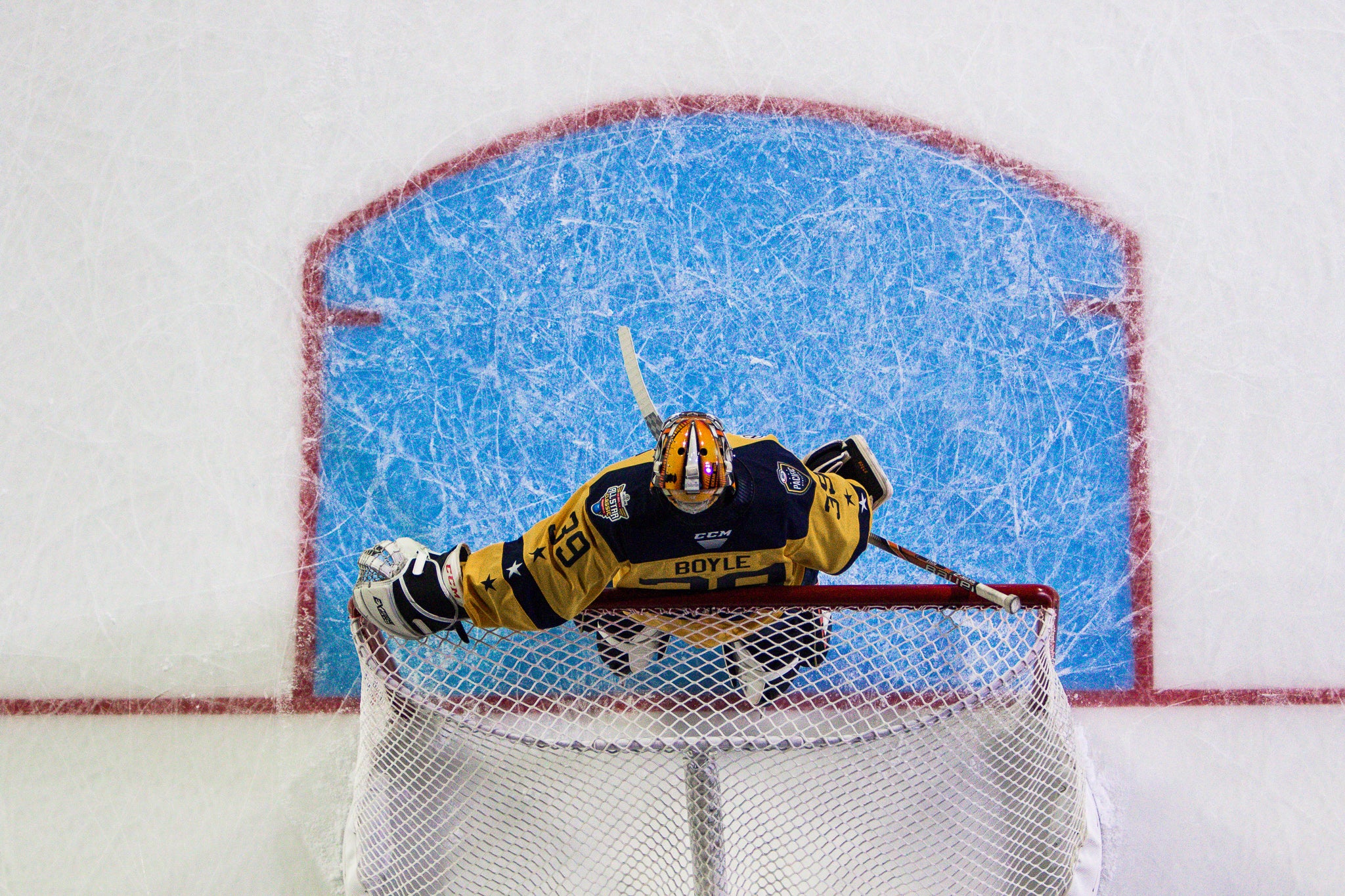 “It’s just great to see Kevin really get his feet underneath him. I know he’s still trying to get better each and every day which is excellent,” said head coach Dallas Eakins on Boyle’s performance. “This is a young man that has put a lot of effort into his development and here we are now and it looks like he’s really breaking out.”

His numbers were even more impressive away from San Diego where he had won five consecutive road games dating from December 30 with another win against San Jose. Over that span of road contests, Boyle posted a 1.80 GAA and .941 SV%, allowing just nine goals over the five contests.

Boyle’s dominant performance sparked a season-changing run for the Gulls and propelled them into a playoff contending roll. The stretch of wins also earned him a spot in the 2019 Lexus AHL All-Star Classic presented by MGM Springfield. As the first goaltender to represent the Gulls in an All-Star Weekend, Boyle participated in a number of events. One of which was the Western Mass Sports Commission Pass and Score contest, where he faced and stopped Cory Conacher (SYR), Jordan Szwarz (PRO) and Calle Rosen (TOR) for a perfect 3-3 record.