The Gulls have always taken pride in their sense of community with the goal of giving back through a variety of ways. Players, coaches and staff members of the Gulls organization participated in various community events to raise well over $100,000 throughout the 2018-19 season. The goal of these events is to make a positive impract for children and families throughout San Diego.

Right before the conclusion of 2018, Gulls players joined other local athletes from the San Diego Padres, former San Diego Chargers and many other organizations during Junior Seau Foundation's annual “Shop with a Jock” event. Each Gulls player was matched up with a child from the Boys and Girls Club, and the pair shopped at Target in Mission Valley for Christmas gifts with a $100 gift card provided by the Junior Seau Foundation.

“Sometimes, we maybe forget about just how lucky we are to be in the position that we’re in as hockey players and role models in the community,” said Gulls forward Sam Carrick. “To be able to go out to an event like this and take a kid shopping for something as fun as Christmas, it’s just one thing that we can do that puts a smile on a kid’s face. I think we benefit just as much as the kid does.”

The 2018-19 season was about to begin and the Gulls were preparing to open their regular-season schedule against the Roadrunners in Tucson. Prior to the game, Dallas Eakins named Jaycob Megna as the second team captain in club history on Oct. 6 following three consecutive years of the defenseman serving as an alternate captain.

Megna had been with the Gulls in each of the three prior seasons, playing in all 19 playoff games and dressing for 178 of the clubs 204 all-time regular season games, 51 more games than the following player on that leaderboard. In addition to leading the Gulls in all-time games played, the veteran defenseman led in plus/minus with a +54 rating. 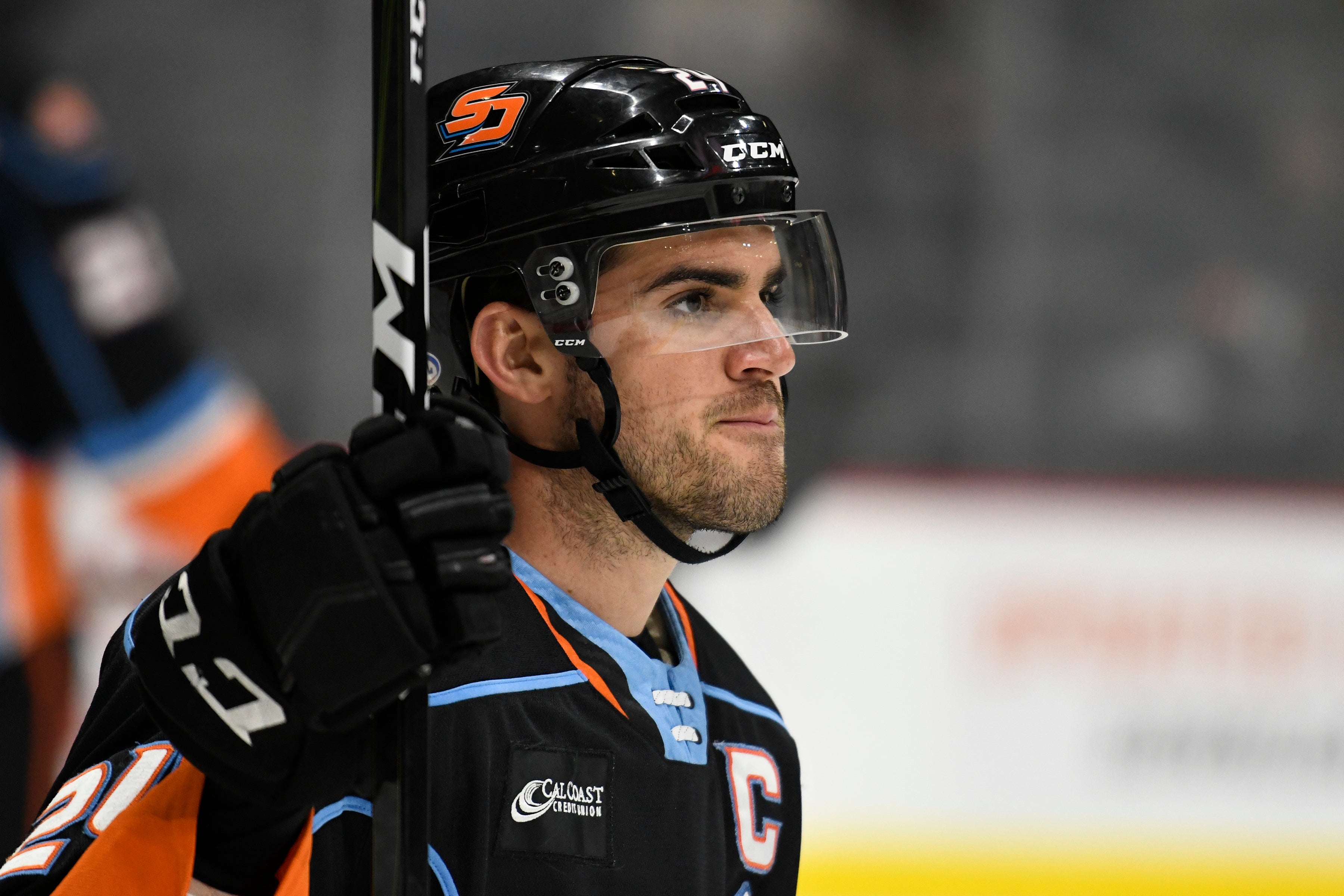 “Jaycob’s positive impact and influence on his teammates and our community has earned him the right to lead our group,” said Gulls head coach Dallas Eakins. “We are privileged to have a captain who is selfless and serves others first. He is not only a role model for us but also for the great community of San Diego. Jaycob will also be well supported by a very strong group of alternate captains.”

Sam Carrick, Corey Tropp and Kalle Kossila served as the primary alternate captains throughout the 2018-19 season, helping Megna lead the team both on and off of the ice.

The 2018-19 season marked Dallas Eakins’ eighth season as an AHL head coach and his fourth behind the Gulls bench. On Feb. 8 of this year, he earned his 300th career AHL win, becoming just the 21st head coach in AHL history to reach that milestone.

The win came in Ontario at Citizens Business Bank Arena where the Gulls defeated the Reign by a 6-4 score to mark the beginning of a six-game road trip, the longest in club history. Chase De Leo scored twice in his first multi-goal performance as a Gull. Corey Tropp also netted two goals, including the game-winner, and picked up an assist to tie his career-high for points in a game (2G/1A). 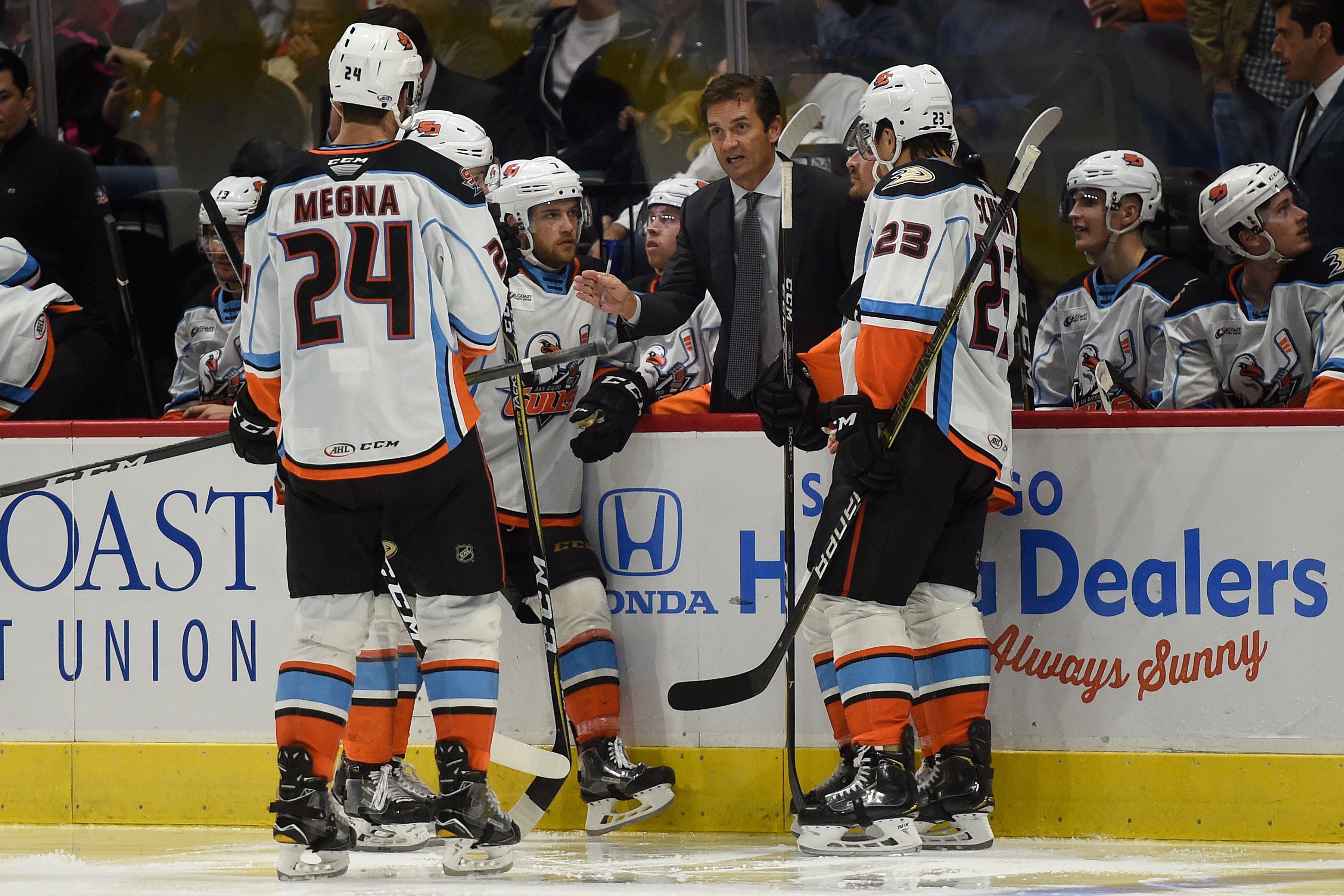 Military Weekend always represents a significant weekend both on and off of the ice for the Gulls. Each year, the Gulls honor the U.S. Armed Forces by paying tribute to local military members and their families, in addition to raising awareness and funds for local military nonprofit organizations. This season, the Gulls provided tickets, at no cost, to over 4,000 military members and their families as part of a ticket donation plan to benefit local service members where the Gulls matched all fan contributions.

For the special weekend this season, the Gulls hosted the Colorado Eagles in back-to-back games marking the first-ever meeting between the clubs. San Diego sported new patriotic-themed specialty jerseys on each night during the weekend. The game-worn jerseys were autographed and auctioned following the second of the two games and proceeds were donated to the Armed Services YMCA, Operation Rebound of the Challenged Athletes Foundation and All-Star Vets. 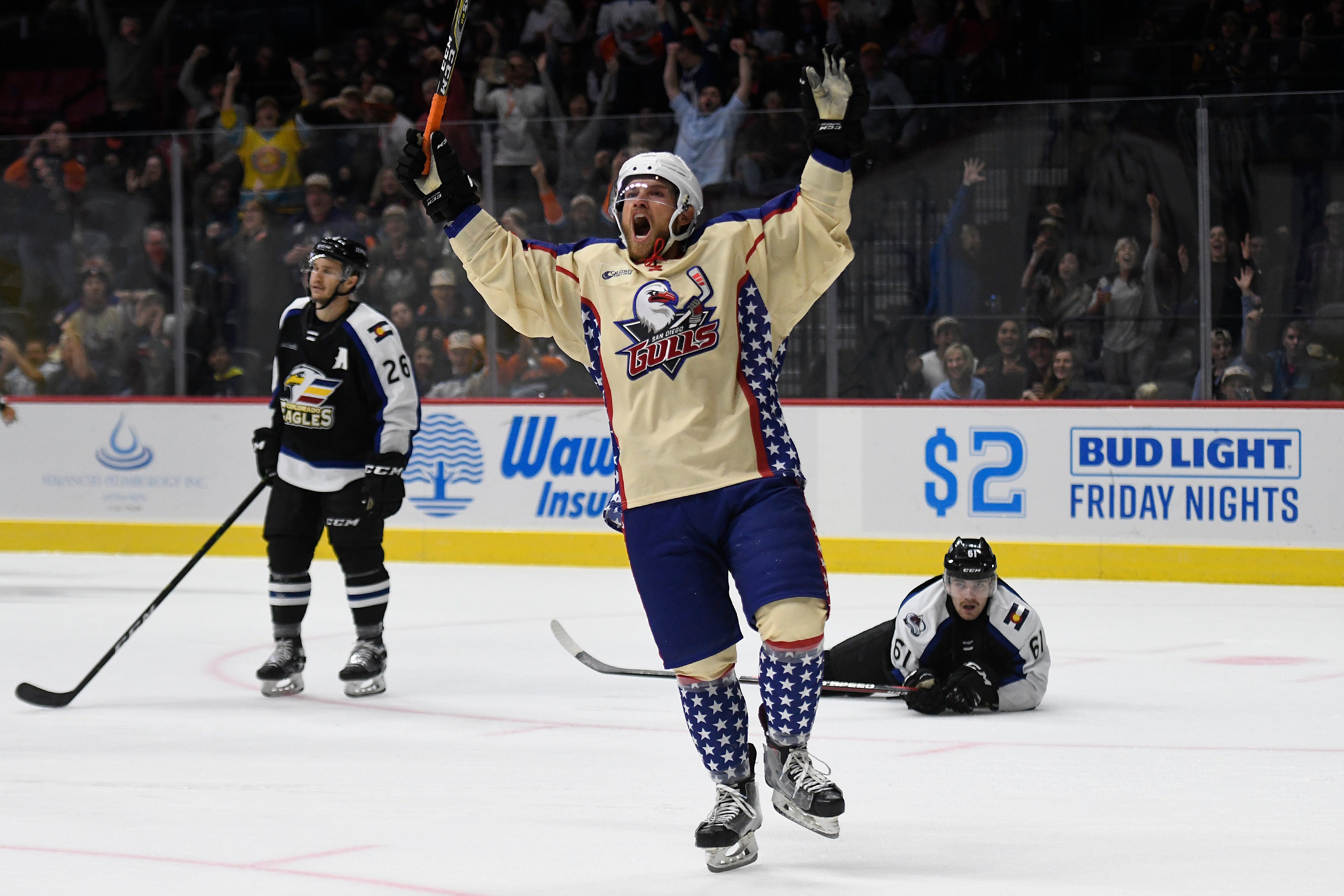 The two games drew a combined crowd of 23,428, including the first sellout crowd of the season (12,920) on Nov. 9. In that same sellout game, the two teams went back-and forth, trading goals, until Chase De Leo scored the go-ahead goal late in the final period. The Gulls would hold the lead and win the first of the two games by a score of 4-3 behind multi-point efforts from De Leo (1G/1A) and Sam Carrick (1G/1A).

The following night on Nov. 10, the Gulls concluded Military Weekend with another win over Colorado as rookies Max Comtois, Max Jones and Troy Terry led the way as the three goal-scorers showed in a 3-2 victory.

“Those are two hard-fought games,” said Gulls head coach Dallas Eakins following the Saturday contest. “It’s always amazing you can go into a weekend and win a couple of games 4-1 or 5-1 each and you feel good, but when they are that hard fought, that close, and you’ve had so many guys sacrifice, it feels even better. I’m really proud of our group.”

The Gulls have led the AHL in attendance the past two seasons, but nationally the hockey world had yet to grasp what America’s Finest Fans bring each night. That all changed on May 24 when San Diego hosted the Chicago Wolves in Game 4 of the Western Conference Finals in a game televised locally on FOX 5 San Diego and nationally on NHL Network.

People around the country were able to witness 12,147 fans packed into Pechanga Arena San Diego, the largest crowd of the 2019 Calder Cup Playoffs. Game 4 peaked at a 1.7 household television rating and averaged a 1.3, tying a club record for the highest average viewership for a Gulls home game previously set on March 23 vs. Ontario. 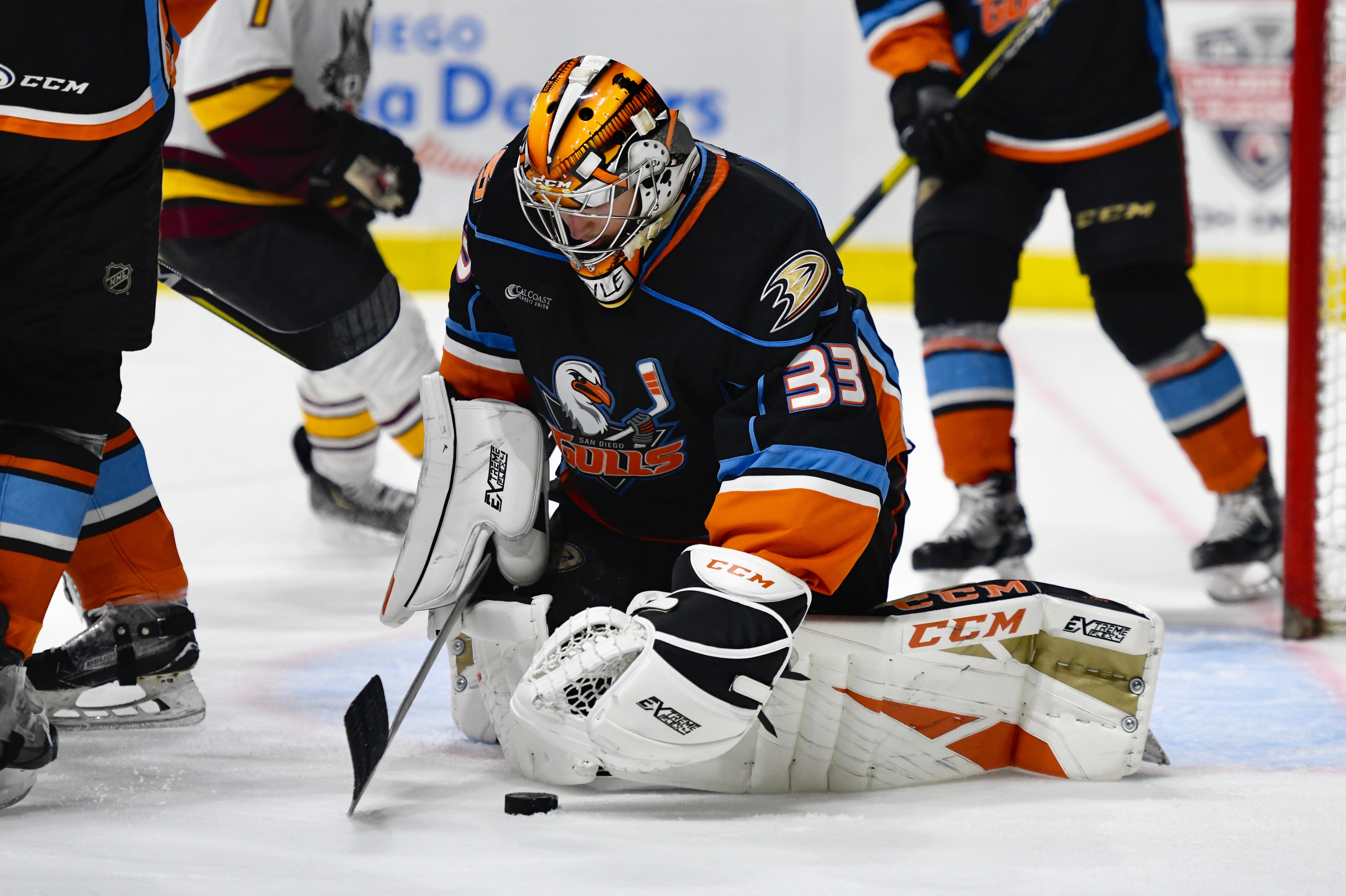 Despite what the 2-1 score suggested, the game was one of the more exciting contests of the postseason as both goaltenders battled through the full game and 26:01 of overtime. Kevin Boyle stopped 42-of-44 shots, including a number of highlight-reel saves in his first career postseason overtime contest. Chicago took the victory to tie the series at 2-2, but the game nationally showcased the true hockey town San Diego is.