As we continue to look back on our top moments from the 2020-2021 season, we focus on our top saves, which include a game-changing save and a highlight-reel stop from one of our rookies.

5. Dostal Denies Tic-Tac-Toe Chance with a Big Pad Save – May 24

Two of the saves on this list come from rookie netminder Lukas Dostal’s performance in Game 3 of the Gulls’ Pacific Division Semifinal playoff series against the Bakersfield Condors. Since this year’s abbreviated playoff format called for just three games to decide who would advance to the Pacific Division Finals, this game was a do-or-die situation. 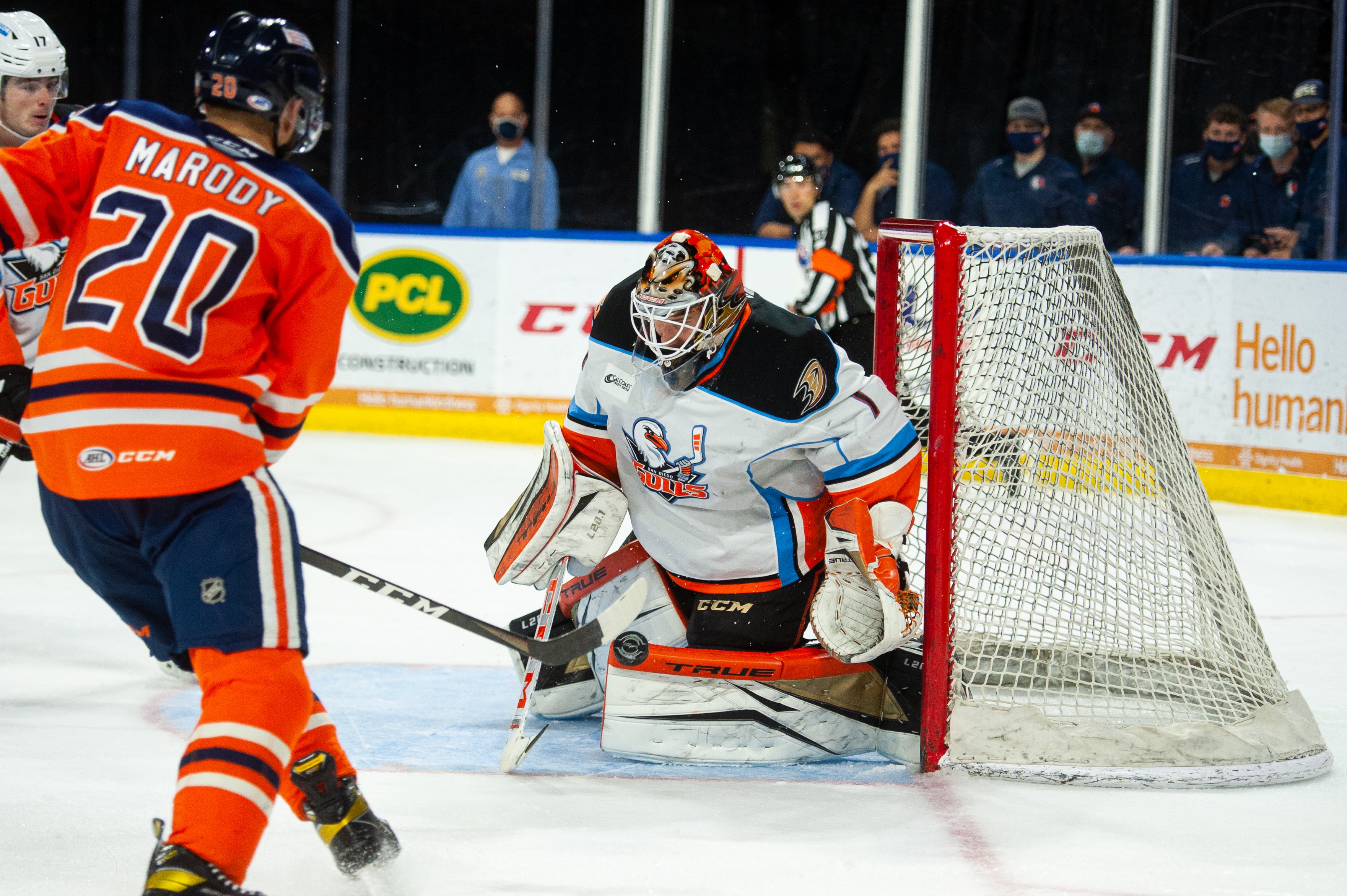 A trio of Condors forwards - Luke Esposito, Raphael Lavoie, and James Hamblin - took possession of the puck in the Gulls zone. With San Diego defenders out of position, the three were able to connect on a tic-tac-toe chance with Hamblin attempting the finishing move. Dostal noticed the potential pass across the crease and lunged across the crease to make a stellar pad save.

This highlight-reel save occurred while the game was tied with just over three minutes remaining in regulation, keeping the Gulls alive and increasing the importance of the critical save. 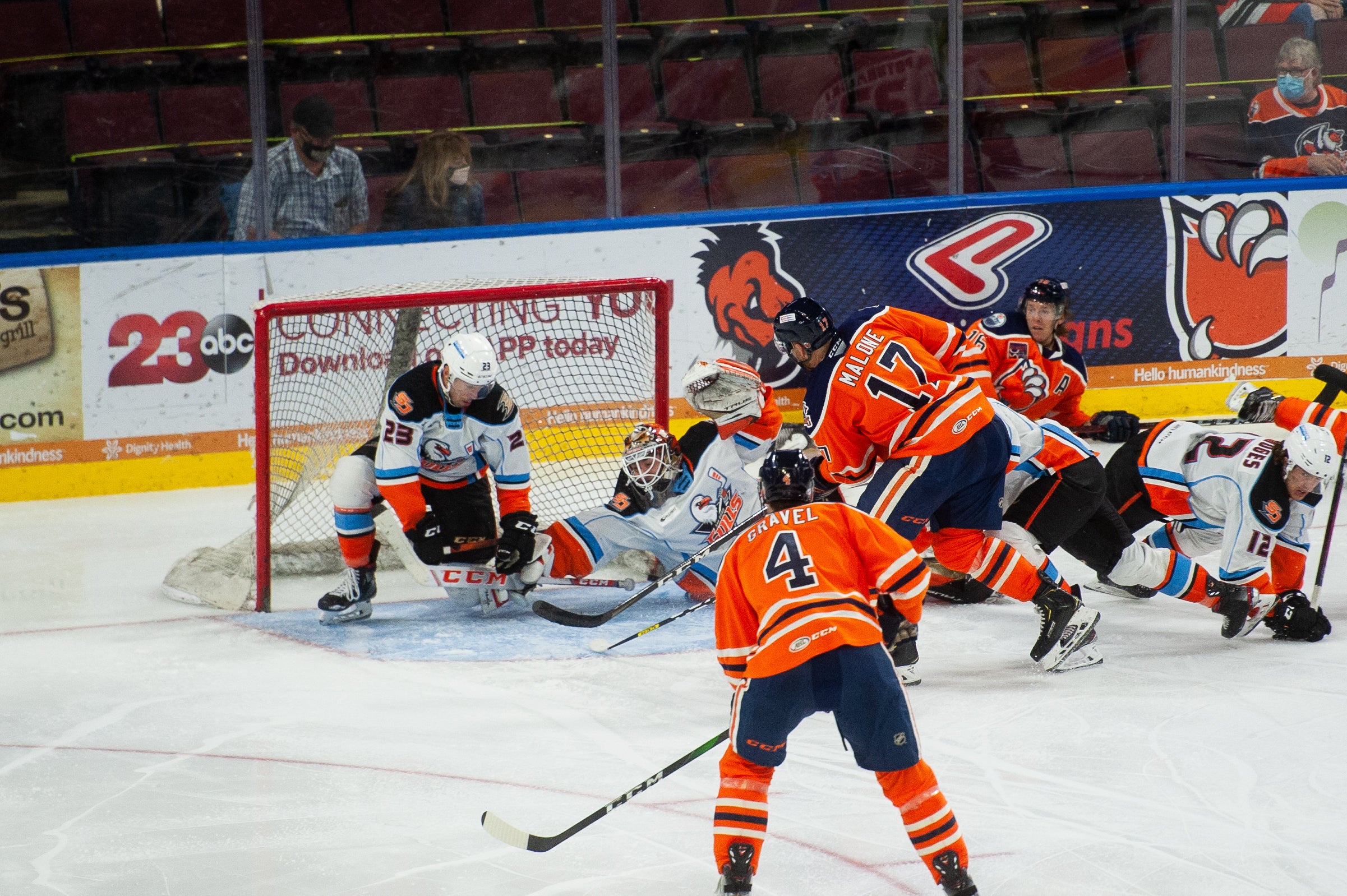 4. Gulls Combine Efforts to Deny Flurry of Condors Chances – May 8

Goaltenders are the only players who are credited with saves on the stat sheet, but that doesn’t mean skaters can’t make them too.

On May 8, as the regular season wound down and Pacific Division teams were fighting for postseason positioning, several players, including Dostal, stopped a flurry of chances from Bakersfield.

Condors forward Brad Malone started the play by intercepting the puck and driving it down the ice, past the Gulls defensemen and making an initial move that was stopped by Dostal – a save worthy of making this list alone.

However, what made this highlight special were the additional saves by a combination of players defending the Gulls net. Condors forward Tyler Benson attempted a second chance by banking it off the back of Dostal, but Kodie Curran broke up the play, and drove it away from the net as Andrew Poturalski finished a check on Benson.

Malone grabbed the loose puck and attempted another chance on net, but Curran and Dostal laid out on the ice to stop the third try and keep it out of the net. 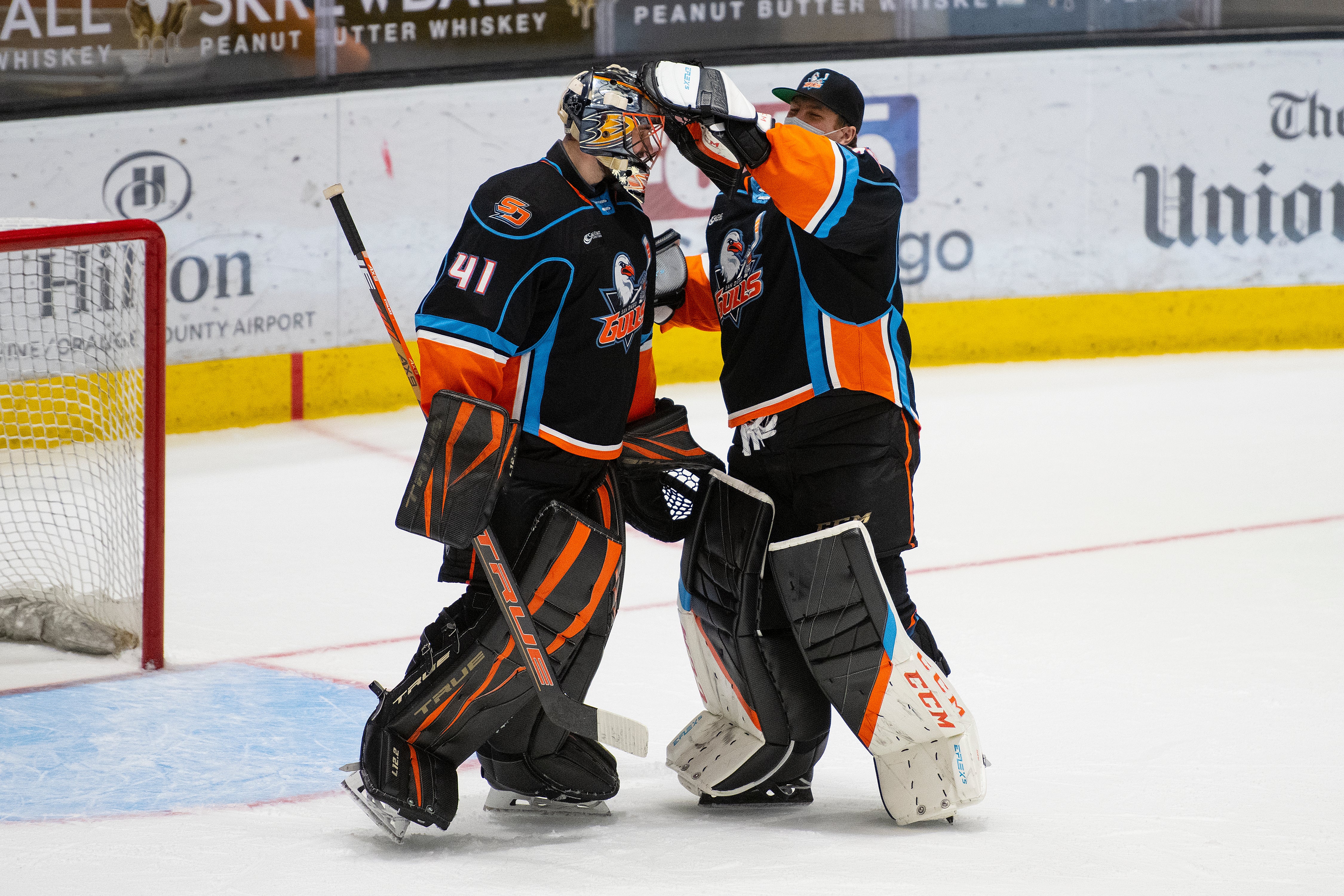 3. Stolarz Denies Colorado on a Long Stretch Save – Feb. 13

Anthony Stolarz, a San Diego Gulls representative in the 2020 American Hockey League All-Star Classic, came up with another huge save early in the season. Stolarz spent the majority of the season as the Ducks third goalie on the taxi squad, playing in three contests with the Gulls.

In his first appearance with the club since the 2019-20 season cancellation, Stolarz showed up in a big way, stopping 31-of-33 shots for a 3-2 win over the Colorado Eagles. None of the saves were as special as the one he made midway through the first frame against Riley Woods. With the Colorado forward coming in on a one-on-one chance, Stolarz made an initial save from a deflected chance and stopped the rebound with a sliding save that makes you hope he stretched before the game.

The stellar stop made Gulls fans happy to see ‘Stolie the Goalie’ back in net for San Diego and reminded them of his tremendous skill.

“It was a long time coming,” said Stolarz on playing his first game of the season. “Just to get back on the ice, especially with a lot of the guys from last year and seeing guys from over the summer, getting to go out there and battle with them was a lot of fun. Tonight I was trying to get my feet underneath me and do anything I can to help the team get the two points.” 2. Dostal Slides Across the Crease to Come Up with Clutch Postseason Save – May 21

Another play by Dostal winds up this list, and this one was special. In Game 1 of the Pacific Division Semifinal against the Condors, Dostal’s first professional postseason appearance, he made a move that fans should remember.

The game was in a scoreless tie almost eight minutes into the game when San Diego’s netminder denied the best scoring chance for either team in unbelievable fashion. Bakersfield took possession of the puck in the Gulls zone and a feed from Cooper Marody to Benson seemed destined to find twine, but Dostal denied the chance, flashing the glove in a full spread.

“He was lights out that first period,” said Gulls head coach Kevin Dineen after the Game 1 win. “We gave up some quality opportunities against a really offensively-talented team – he settled the ship right down and we found our footing. We came up the day of the game and that was our preference, just to come up here on a business trip. It took us a little bit to get going but (Dostal) was right on from the drop of the puck to the final whistle.”

Dostal would go on to make 39 saves in his AHL postseason debut, becoming the youngest goaltender in Gulls history to record a playoff victory (20 years, 10 months, 30 days). 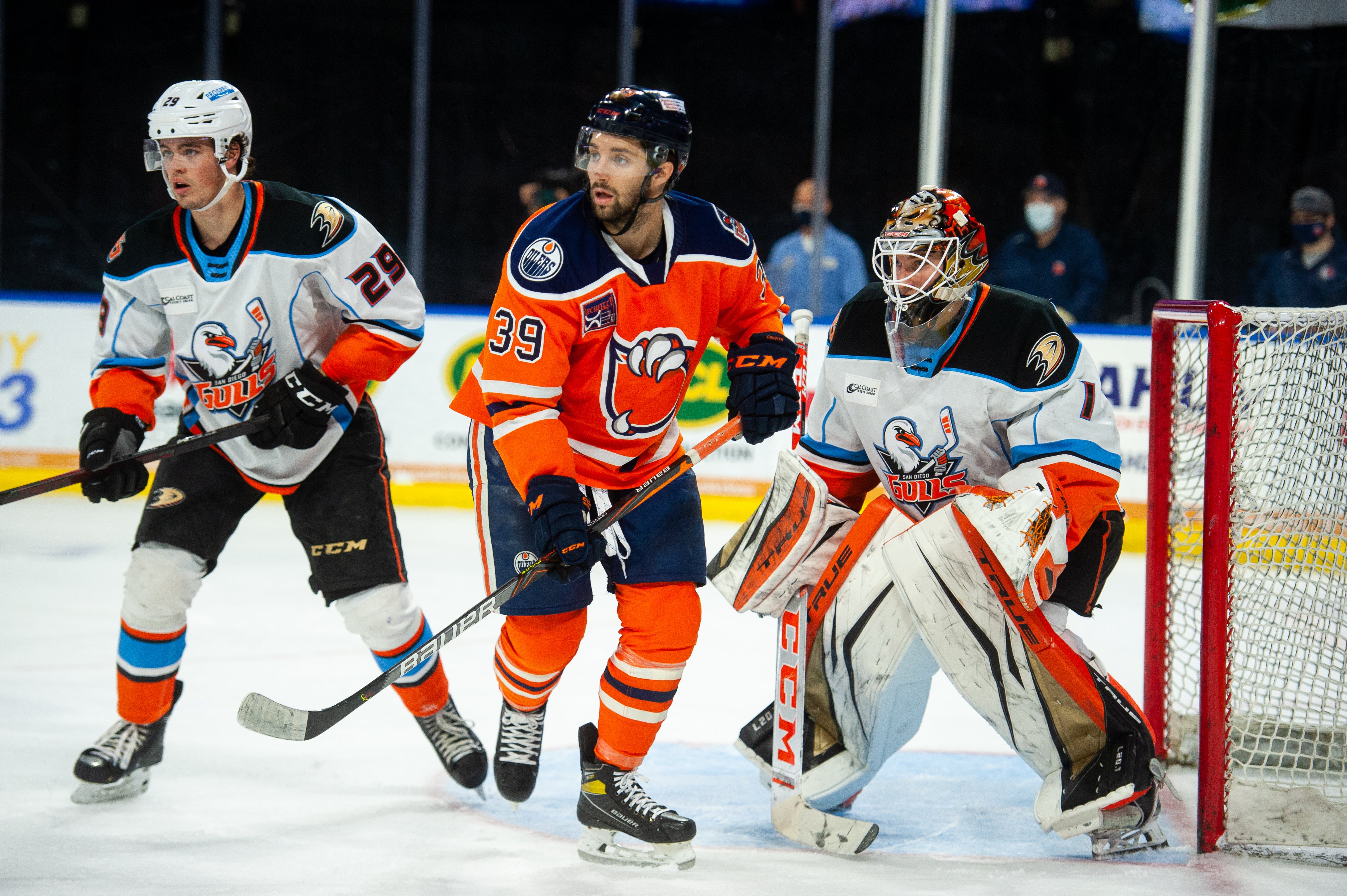 1. Dostal Doubles Down with Another Late Save In Game 3 Against Bakersfield – May 24

The number one spot on this list came in the same game and same period as the number-five ranked save. In fact, the two highlight stops are separated by less than two minutes of play. Keeping the game tied 1-1 late in the deciding game, Dostal doubled down with a second save that will remain on his résumé for a long time.

With just over a minute left in regulation, Lavoie fed Seth Griffith down low in the slot, challenging Dostal to stretch across the crease again and make not one, but two saves. The rookie showed his steadiness in net and gave the club an opportunity to go to overtime.

Although the Gulls were ultimately unable to advance to the Pacific Division Finals, Dostal made his presence known and set a high bar of expectation for years come.

“All three games in the playoffs here, he has shown his character and his potential” Dineen explained following the postseason defeat. “That’s what we talk about developing. When a kid comes out and plays that hard, that’s a sign of a great future to come. He had a fabulous performance tonight to follow up on his previous two.”