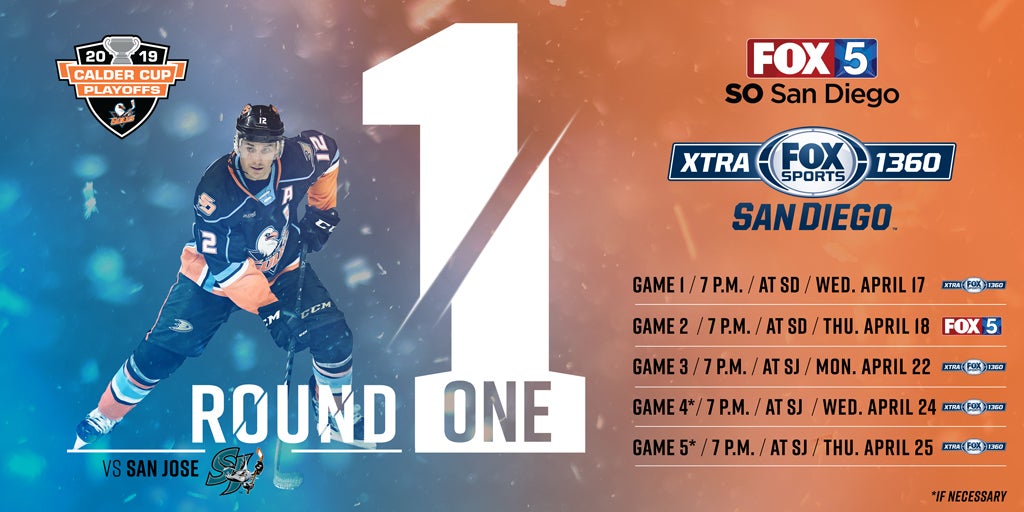 The San Diego Gulls announced today that the American Hockey League (AHL) club’s television and radio broadcast schedule for the first round series against the San Jose Barracuda. The clubs will meet in Game 1 Wednesday night at Pechanga Arena San Diego (7 p.m.).

As the team’s official radio flagship for the 2019 postseason, all San Diego Gulls games, both home and away, will be broadcast live in their entirety by iHeartMedia San Diego and nationwide on iHeartRadio, a live streaming radio service. Pre- and post-game coverage will accompany all broadcasts.

For all radio broadcasts, iHeartMedia San Diego coverage on XTRA 1360 Fox Sports San Diego will begin with a 15-minute Gulls pre-game show hosted by Zilch and BJ MacPherson. In the booth, Zilch will deliver play-by-play alongside MacPherson.

Tickets for San Diego’s 2019 Calder Cup Playoffs First Round against the San Jose Barracuda are on sale now at SanDiegoGulls.com/playoffs, by phone with the San Diego Gulls ticket office at 844-GO GULLS or in person at the Pechanga Arena San Diego Box Office. Tickets will be sold at the box office on a first-come, first-served basis.