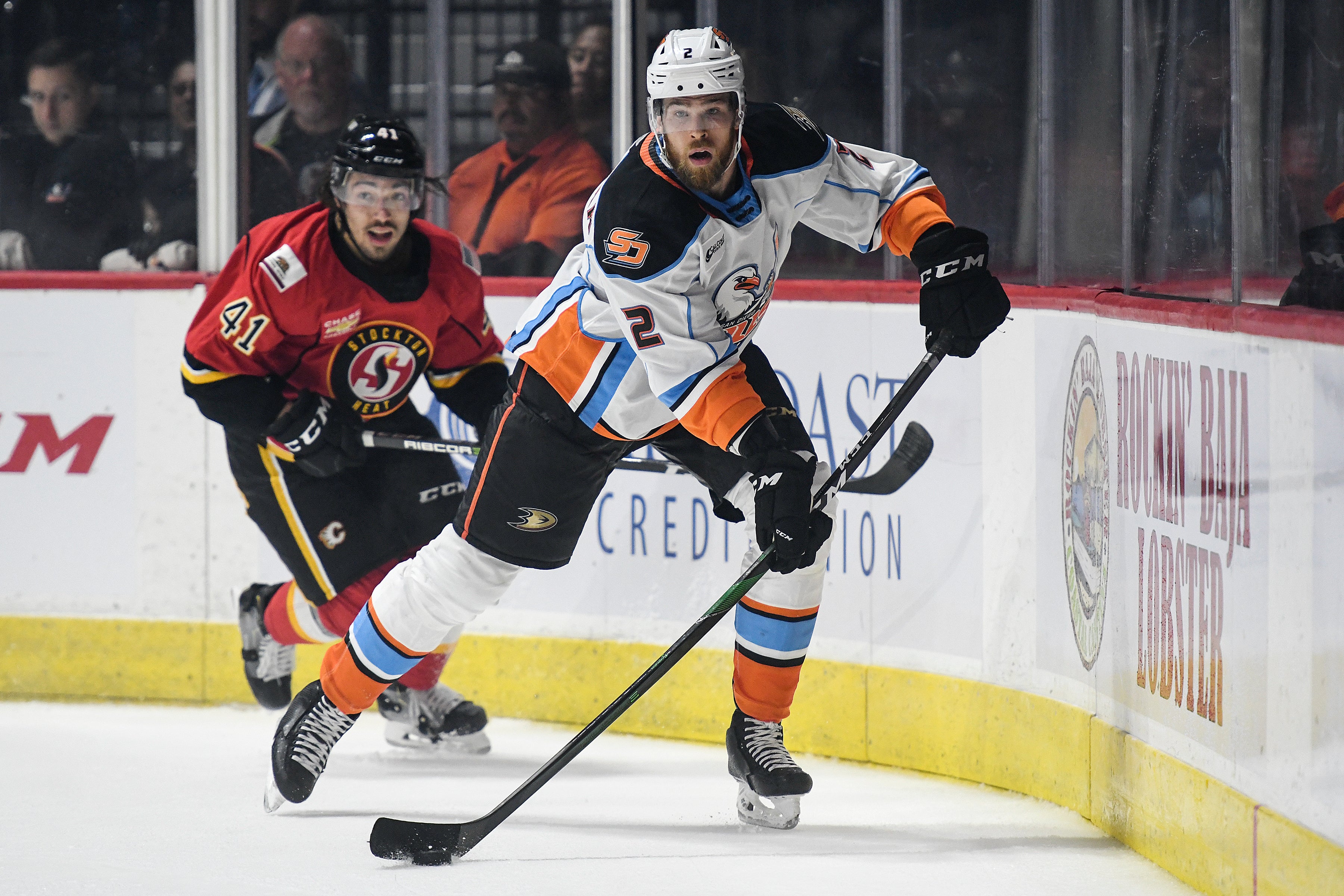 The Gulls are still searching for their first win of the season after dropping their home opener 5-1 to the Stockton Heat. Daniel Sprong scored the lone goal for San Diego. Byron Froese netted two goals to lead the Heat to their fourth victory in five games this season, while Alan Quine and Dillon Dube each earned two assists and Zac Leslie earned a goal and an assist.

“They played hard and our push back is just not there right now. It feels like we are still in a mode that is not  automatic,” said head coach Kevin Dineen. “Things are still looking like we are playing too robotically. We need to get our feet moving, we need to start again in practice this week. We’ve kept a real positive attitude, we want these guys to come to the rink, enjoy that every day and work hard.”

Stockton got on the scoresheet first, with 7:41 left in the first period, creating a turnover in the offensive zone and capitalizing on the chance. A shot from the blueline hit Stolarz and bounced into the slot where Froese took the puck and scored on a nifty backhanded shot.

The Gulls edged the Heat in shots in the initial 20 minutes of play, leading 11-10 through the first frame.

At the 9:52 mark of the second period, Froese backhanded another shot past Stolarz on the power play to give Stockton a 2-0 lead. The score marked Froese’s second goal of the evening and fourth of the season. Tensions were heightened after the second Stockton goal, as multiple post-save scrums ensued. One of the scuffles resulted in offsetting roughing penalties for both sides.

Stockton used the momentum from the scrappy play to tally another goal with 1:33 left in the middle frame. Ryan Lomberg sent a shot from the slot past Stolarz four seconds after the Gulls had killed a Heat power play, pushing the lead to 3-0.

Stockton added two more goals 3:35 apart in the third period, extending the lead to 5-0 after goals from Leslie and Buddy Robinson. Following the Heat’s fifth score, Stolarz was relieved by Boyle, who stopped all six shots he faced. Within a minute of the goaltender change, Simon Benoit dropped the gloves with Martin Pospisil, which energized the crowd of 11,523 at Pechanga Arena San Diego.

Sprong fed off that energy on back-to-back breakaway opportunities in the second half of the third period. After being denied on his first attempt, he was able to backhand the puck past Jon Gillies, to  make the score 5-1 12:37 into the third period. The play started when Chris Wideman grabbed the puck out of the air and passed it to Jack Kopacka who split two defenders, giving Sprong the breakaway.

Sprong’s score marked his first as a Gull and the forward finished with a team-high eight shots on goal. Kopacka recorded the primary assist and Wideman added the secondary, his first point with San Diego.

“There’s no secret formula. It’s going to come down to us working hard, getting back to playing that blue-collar style,” said Gulls captain Sam Carrick. “It’s up to us as players. Everyone needs to be better. But the good news is we have a lot of practice time this week to work on things and we’re confident that we can turn it around.”

The Gulls will close the two-game homestand Friday, Oct. 25 vs. Ontario (7 p.m.) before ending the month Saturday, Oct. 26 against Ontario at Toyota Arena (6 p.m.).