Going overseas away from friends, family, and a lifestyle that you are familiar with is never an easy decision. In pursuit of a life-long dream, Isac Lundestrom decided to make that leap across the water in his attempt to not only reach the National Hockey League (NHL) level but to become a mainstay in the league.

If you turn the clock back to June of 2018, the Anaheim Ducks used their first selection of the NHL Entry Draft to choose the forward 23rd overall. This would begin an excruciating calendar year that was chock-full of learning experiences, growth, and plenty of frequent flyer miles. Only a few days following the draft, Lundestrom was immediately introduced to the Ducks culture during the yearly development camp. This would provide him with a crash course of learning tools to equip him for what lay ahead.

The first time Lundestrom would wear the Ducks uniform was not in a preseason game at the Honda Center. Instead, he debuted with the webbed-foot logo alongside several other prospects at the 2018 Vegas Rookie Faceoff. There, the forward was an integral part of the team winning all three games in dominant fashion. This tournament gave the prospect a view of what the Ducks expected from a fundamental and stylistic standpoint. The opportunity to make the Ducks out of training camp was apparent for Lundestrom and one that was not squandered. He began the season in the NHL which was a strong accomplishment for a player drafted just three months prior.

At the time, the Ducks boasted a strong Swedish presence in the organization, and Lundestrom had several fellow countrymen to help him with the transition such as Jacob Larsson, Marcus Pettersson, Hampus Lindholm, Rickard Rakell, Jacob Silfverberg, and Pontus Aberg. Lundestrom skated in 15 NHL games to start the 2018-19 season where he collected two assists. He was then reassigned to the Gulls to play an elevated role with more ice time. In 12 AHL games with San Diego, he expanded his playmaking abilities and picked up six assists. 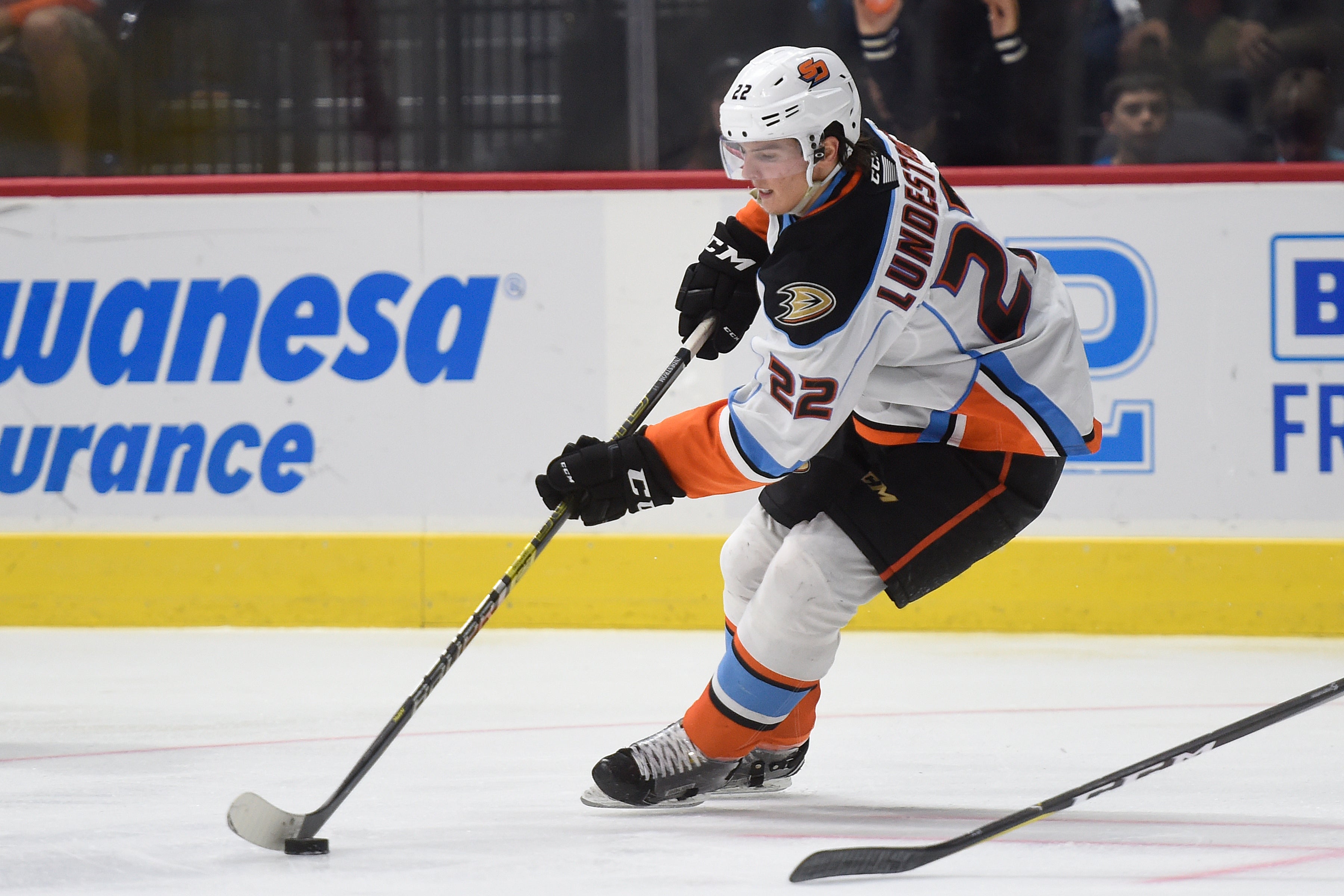 Following this spurt with the Gulls, Ducks management felt it would be beneficial for the forward to participate in the World Junior Championship held in Vancouver. Despite not medaling, Lundestrom posted a strong overall performance collecting 1-3=4 points and a plus-2 rating in five games played.

Following the tournament, it was that decided returning to Sweden was the best avenue for Lundestrom. He rejoined Lulea HF, a team he skated with for the two previous seasons in the Swedish Elite League. With the season already halfway over, the forward dressed in 17 games, recording 2-7=9 points and a plus-5 rating. His postseason numbers with Lulea HF were even more impressive where he collected 2-6=8 points in 10 games played. Following the team’s elimination, Lundestrom had more work to do and was reassigned back to the United States to resume play with the Gulls and their chase for the Calder Cup. The miles continued to pile up, but it did not phase the youngster.

After the Gulls claimed victory in Round One of the Calder Cup Playoffs, Lundestrom’s return came in Game One of the Pacific Division Finals against the Bakersfield Condors. The club continued forward, winning that series in six games, but eventually fell to the Chicago Wolves in their first ever Western Conference Finals appearance. Spanning those two rounds, the forward appeared in seven games and amassed 1-2=3 points and a plus-3 rating, finally putting an end to nearly a year-long introductory season with the Ducks organization.

Year two was a much simpler calculation for Lundestrom in regard to logistics. He remained in Southern California his entire season and saw the bulk of his action in the AHL with the Gulls. In the shortened season, the forward played in 43 AHL games posting 6-15=21 points that saw him rank second among rookies on the team. In addition, he was granted more time with the Ducks, appearing in 15 games, and tallying four assists. Despite the AHL’s season coming to an early close due to the COVID-19 pandemic, the outline for success in the NHL was clearly displayed in the forward’s game.

Last season, his third with the organization, also wrote an interesting tale to maturation in Lundestrom’s game. In an effort to stay sharp until the delayed start of the 2020-21 NHL season, he suited up for Timra IK of the Swedish Allsvenskan league. A clear dominance was shown after only 12 games where he totaled 5-6=11 points and a plus-7 rating. Once the NHL resumed play, Lundestrom took hold of the opportunity given to him and did not look back. No AHL reassignment was needed as he skated the full season with the Ducks, collecting 6-3=9 points in 41 games. As a player who is regulated to enduring long seasons, Lundestrom agreed to compete in the IIHF Men’s World Championship tournament following the NHL season and tallied 1-1=2 points in seven games. 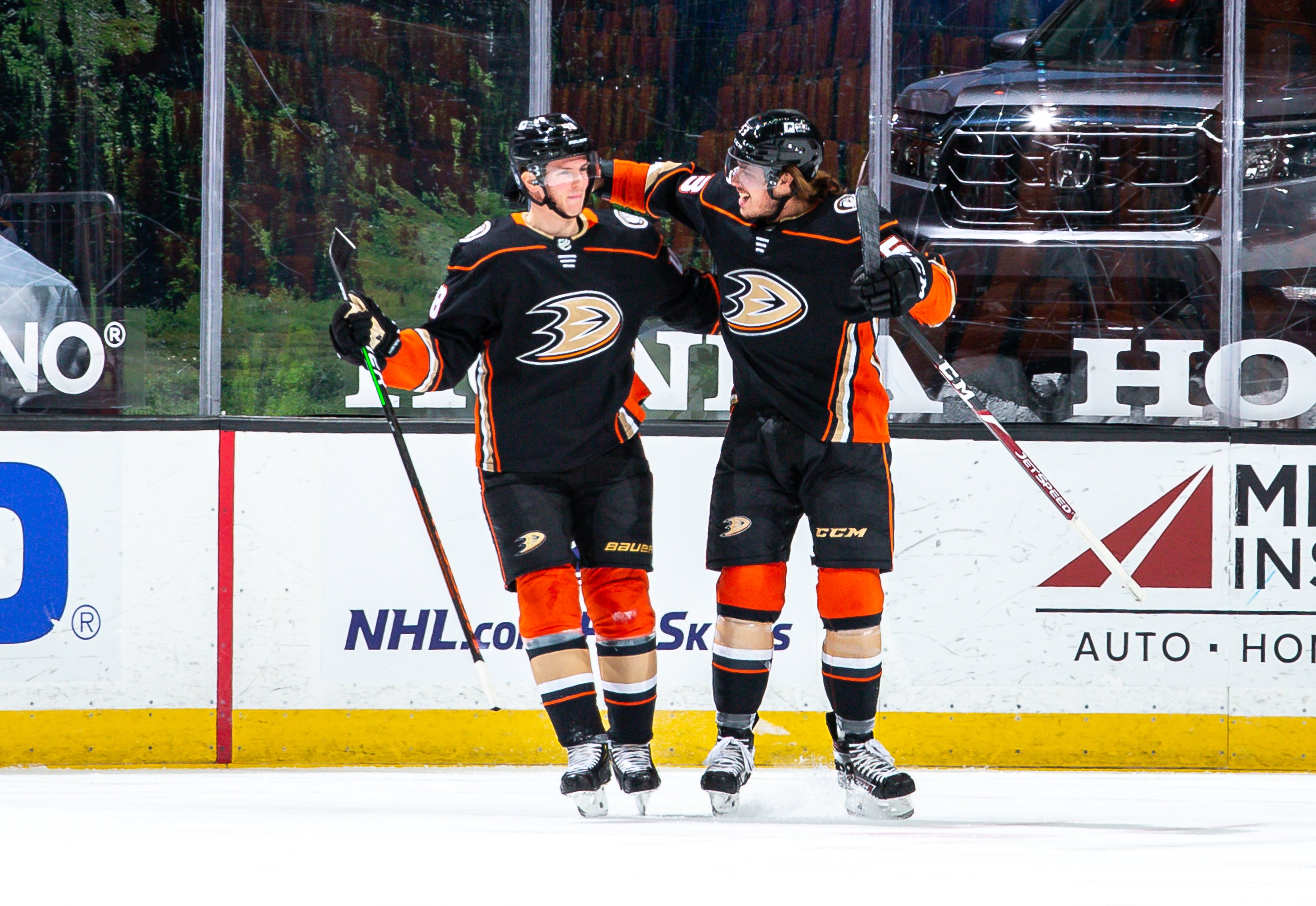 Just three seasons into the professional level, a wealth of experience has been gained by the 21-year-old. Yes, it has seen him removed and added from his home country several times, but each time paying him immeasurable knowledge of the professional game. The same can be said for the time played with the Gulls in the AHL whether it be the regular season or playoffs. Lundestrom is extremely familiar with long seasons and now hopes to have one in the near future with the Ducks in pursuit of another dream – the Stanley Cup.