It's a lifelong dream for hockey players to hear their name called in the NHL Draft.

"It's awesome," he said via Zoom, decked out in a Ducks' jersey and draft cap. "It's unbelivable being where I am right now. It's definitely a really fun time. There's nothing but excitement in the room when I got picked. Really exciting time.

"In regards to waiting, it's a very nerve-wracking time, to say the least. When you hear your name called, it's definitely something special. It lived up to and surpassed everything I thought it would be. It's awesome. I'm here at my house with my family and a few of my friends; being with the people that are closest to me makes it really special as well. I'm very fortunate to be where I am."

The defenseman discussed the draft process, broke down his game and joining the organization:

On it being different at home rather than an arena:

I'm not exactly sure what it would be like being at an arena. For what I have now, to me, this is perfect and all we can ask for. I'm not trying to focus on what could have been. I'm living in the moment, spending time with my family and my friends.

On how well he fits in with Anaheim:

I think skating is probably my best asset. I think, with Anaheim, Cam Fowler is obviously a really good skater as well. That'll suite it (his game) well, the style. I'll just look to do everything I can to crack the lineup and be a difference maker. I work to be the best player I can for the Ducks. That's my goal moving forward.

On taking note of some of the young defensemen in the recent Stanley Cup Playoffs:

Having the opportunity to watch guys like that play in the playoffs - how they did and how young they are at the same time - it's really cool to watch and something I really noticed is the confidence those guys have with the puck and their abilities. They have the abilities, they're confident with themselves and when they saw a play, they made it. I think that's something I definitely admire and like. I definitely do try and take things I like that I see from their game and implement it into mine, because they're pretty successful with what they're doing. Anything I can take from their game will benefit me. 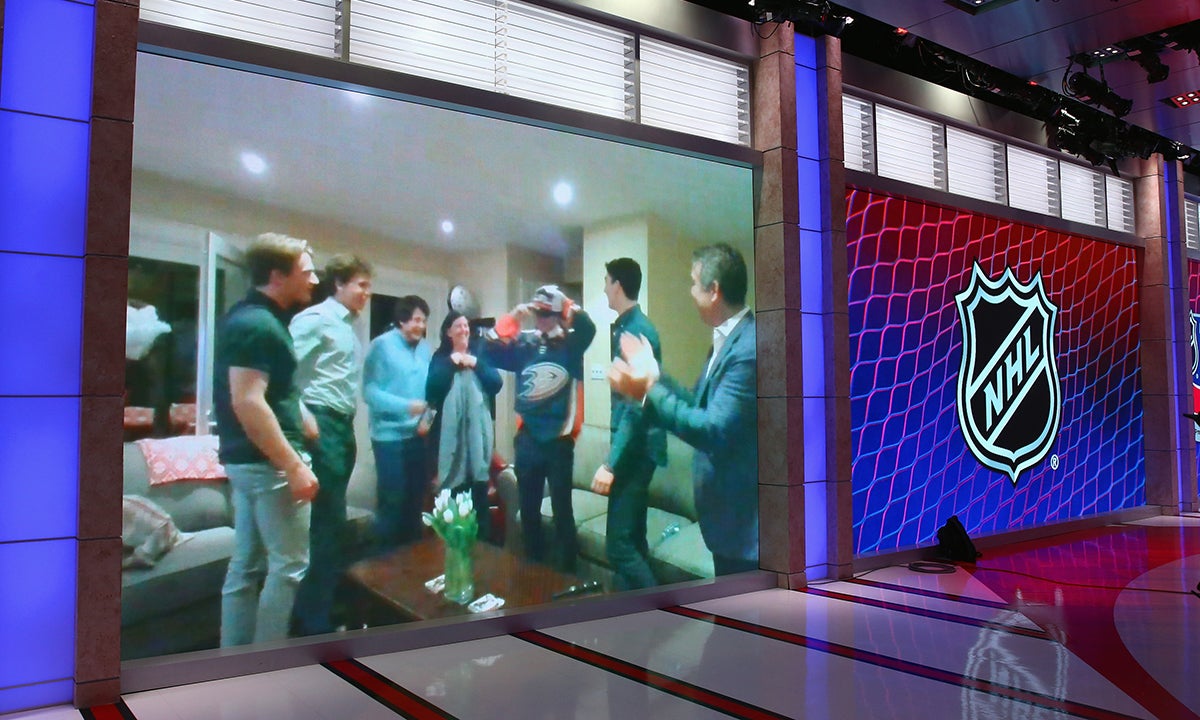 I think there's a time and place for everything. For risk, there's some points where there's very high-risk plays you want to try and avoid. For me, it's a matter of figuring out the good balance and trusting my abilities to make the play if I see it. One thing is, if you see a play and try to make a play you're not 100% confident in, odds are you aren't making it. It's having the confidence to make the play and executing on it.

On waiting for his name to get called and his communication with Anaheim:

I had a couple of Zoom calls and calls on the phone with the Ducks. In regards to knowing if they'd pick me or not, I'm going to tell you the exact same things I told my family and friends - I had absolutely no idea where I was going tonight. Just to be where I am now is definitely an exciting time for me, and I couldn't be happier.

On whether he received any hints on his calls that Anaheim would select him:

I spoke with most of the management and some scouts. Not too much was given. It's just an exciting time right now.

On what the Ducks identified as their favorite part of his game:

We had a couple of conversations. The first one was talking about my game - what I liked, what I think is the best parts of my game and what I need to work on. My skating is an asset of mine, and the area I'd like to work on is being sound on the back end. I want to be a complete player, not just an offensive guy. Really developing that and becoming the elite player I want to be was definitely brought up on the call.

I'm just happy to be drafted by the Ducks. I think the calls went well, because I'm here now.

On being drafted by the Anaheim Ducks:

It's awesome. It's unbelievable being where I am right now. It's definitely a really fun time. There's nothing but excitement in the room when I got picked. Really exciting time.

In regards to waiting, it's a very nerve-wracking time, to say the least. When you hear your name called, it's definitely something special. It lived up to and surpassed everything I thought it would be. It's awesome. I'm here at my house with my family and a few of my friends; being with the people that are closest to me makes it really special as well. I'm very fortunate to be where I am.

On his skating ability:

I think that, like most players in this draft class, I started playing relatively young and skating really young. I want to say from around seven to 14 (years old), I did some figure skating and edgework to do that so that kind of just helped me with my edges and being elusive on the ice and things like that. I’ve always been pretty confident in my skating and in saying that you always want to work on your strengths and develop them even more to push you past the limit. Over the past however many year, I’ve been working on my skating with skating coaches and doing some figure skating stuff too so it’s good.

On his skating coach:

On the Erie Otters organization:

It’s awesome. I’m pretty sure one of the first things that I said when I went to Erie, was that it was awesome how they develop players and how cool it was to be joining an organization like the Erie Otters. Like you mentioned the two names, Dylan Strome and Connor McDavid, they both played for the Toronto Marlboros which I played for as well so that’s really cool as well. Being drafted in the first round and playing for Erie, I can’t say enough good things about Erie and how good they’ve been to me the past two years. I can’t be more thankful for ending up there, how I’ve been treated and the team there.

On his path to the NHL:

I think my mindset going into a camp or into skates with NHL players is I just want to put my best foot forward and make it difficult on management, coaches and the team to send me back. I think that’s what I’m going to try to do and that’s what I try to do every time I have an opportunity to try out for a team and have the ability to possibly make it. My mindset going into camp and going into every opportunity is make it difficult to send me back or not make the team so I think that’s the mindset I have. From here on out, I’m going to be continuing to work to make it to the NHL as soon as I can.

On joining a California team:

I’m super excited, I’ve never been to California. I’ve heard it’s awesome, I’ve heard it’s unbelievable with really nice weather. I’m here in Toronto and it’s been getting pretty chilly. Being able to get out to California, it will be a really cool experience and I really look forward to it.

On how Erie prepared him for the NHL:

A lot of things. In regards to on-ice, me and the d-coach coach B.J. Adams have worked a lot on my defensive game and developing over the past two years, and really dialing in and focusing on the details. Like I mentioned earlier, it’s something that I want to work on and develop. I think that’s one thing that’s gotten a lot better over the two years and I look for it to get a lot better in the near future. In Erie, just being around my teammates day in and day out was definitely something special. I cant be thankful enough for having them by my side over the past two years. I spoke with the whole management, building me as a person, not only focusing on the player, but the person as well. I think that’s something special you get in Erie and I couldn’t be happier to have spend my last two years there.