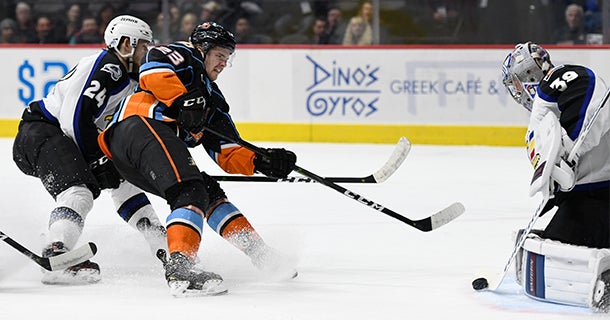 Jeff Glass stopped 27-of-28 shots, but the San Diego Gulls came up short as the Colorado Eagles would score the game’s lone goal in a 1-0 contest at Pechanga Arena San Diego. Colorado goaltender Pavel Francouz stopped all 24 shots en route to his third shutout of the season and fifth straight win.

“It’s that time of year where everybody knows we’re on the stretch run,” said San Diego netminder Jeff Glass. “It kind of felt like a playoff game...We knew we were going to have to clamp down defensively. I actually think we did a great job of that tonight. Unfortunately we came out on the wrong end on the scoreboard, but we played a very strong game.”

The Gulls nearly took the lead on the first shift of the game. Just under 30 seconds after the opening puck drop, Corey Tropp intercepted a failed Colorado clearing attempt. After briefly holding onto the puck, Tropp passed it to a wide open Adam Cracknell, whose shot hit the post. Eagles goaltender Pavel Francouz covered the rebound before it could be put in the net, keeping the game tied at zero.

As the second period was nearing its conclusion, a San Diego turnover led to a breakaway opportunity for Max McCormick. With as much time and space as he needed, McCormick faked a wrist shot and brought it to his backhand for a chance to break the scoreless tie. Glass made a quick maneuver to position himself for an incredible glove save and the game remained even.

The Gulls and the Eagles entered the third period with the scoresheet still reading 0-0. Tonight marks just the second time this season a Gulls game has been without a goal through 40 minutes of play. The only other time this occurred in the 2018-19 season was against the Eagles in Colorado when the Gulls fell 2-0.

With Kalle Kossila sitting in the penalty box on a slashing minor, the Gulls started the third period on the penalty kill. Coming into tonight’s game, San Diego had killed 13 consecutive power plays over the last three games. Tonight was no different as they prevented the Eagles from capitalizing on the man advantage for their 14th in a row.

“I think it has been a real commitment as a group to doing the hard things,” added Glass regarding the penalty kill. “If you ask any of those killers, it’s not fun blocking those shots or making those hard plays on the wall. As a group, they’ve done a really good job. Credit goes to those guys for battling hard in the corners, blocking those shots, and getting the puck down.”

With just 7:25 of time remaining in the game, the game saw its first goal as Colorado found the back of the net. Eagles defenseman David Warsofsky threw a soft shot from the blue line towards the net and just before the puck reached Glass, it was redirected by Dominic Toninato. The deflected shot went through Glass’ leg pads for Toninato’s 10th goal of the season, giving Colorado the game’s first lead after 53 minutes of scoreless hockey.

Toninato has been helping his team light the lamp as of late, recording 4-2=6 points over his last five games. With a secondary assist on the play, A.J. Greer has picked up 2-6=8 points in his previous eight games played.

The game ties a Gulls club record for fewest overall goals in a game, previously set on Nov. 3, 2017 against Ontario. Gulls fans were in full support as 12,261 fans were in attendance to support San Diego in their inaugural Sock Toss night.

The Gulls will conclude a three-game homestand and the back-to-back matchup vs. the Colorado Eagles tomorrow, Saturday, Mar. 9 (7 p.m., TV: FOX 5 San Diego).