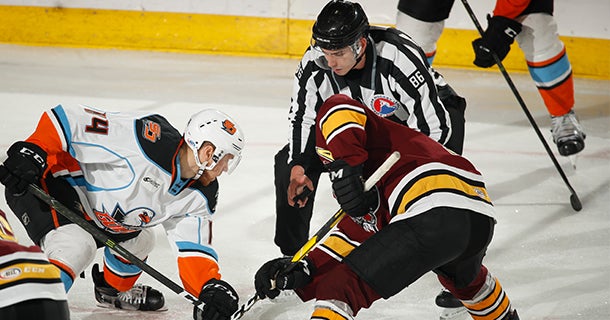 The Gulls came back from three separate one-goal deficits, but the Chicago Wolves came out with a 5-4 overtime win at Allstate Arena in Game 1 of the Western Conference Finals. The Gulls outshot the Wolves in each of the three periods and in overtime for a 44-28 shot difference.

“Yeah that was definitely a good field game for both teams. I think we’re very evenly matched, both capitalized on power plays. We needed one break in the third and got it,” said Adam Cracknell. “We had the lead and he has the ability to shut teams down, especially in the last five minutes. They’re not going to quit and they’re able to get the tying goal and get it in overtime. There’s lots to learn, it’s best-of-seven, there's nothing to panic about. You learn from it, move on and get back at it tomorrow.”

Max Comtois netted two goals, his fourth and fifth of the season. The 20-year-old forward has now picked up 5-3=8 points in his first eight professional playoff games to co-lead all AHL rookies in playoff goals. Adam Cracknell assisted on both of Comtois’ goals (0-2=2) to tie and then take the postseason scoring lead (6-7=13). The veteran forward has 4-7=11 points in his last six games with the Gulls.

Chicago got on the board first after a missed pass in the Gulls zone ended up on Zach Whitecloud’s stick at the blue line. Whitecloud took a quick slap shot and Tobias Lindberg deflected the puck from the slot to redirect it into the net 6:10 into the first period.

San Diego answered with a goal from three players that have played for the Gulls in each of their first four seasons. Andy Welinski collected the puck and slid it to Kalle Kossila from behind the net. Kossila fought off a Wolves defender on his way down the ice before passing the puck through multiple players to Corey Tropp. With a quick wrist shot, Tropp beat Chicago goaltender Oscar Dansk glove side with just 28 seconds remaining in the opening frame. Tropp scored the first ever goal in Western Conference Finals club history.

In a first period without a penalty, the Gulls outshot the Wolves 10-6 and the score was tied at one goal apiece.

With Simon Benoit in the penalty box on a slashing minor, Daniel Carr, retook the lead for Chicago with a goal 10:05 into the middle period. Defenseman T.J. Tynan passed the puck to regular season MVP Carr who took it to the net and pushed it past Jeff Glass for the score.

A few minutes later, Chase De Leo almost tied it after giving himself an open shot with a quick deke around a Chicago defenseman. However, Dansk got the pads down and made the save to keep the lead.

With time winding down in the second frame, the Gulls struck again with a late-period goal. Jaycob Megna caught an attempt to clear the zone and passed the puck to Cracknell who passed it along to Ben Street on the left wing of the ice. Street threw the puck back across the slot, Comtois collected the pass and wasted no time in firing it short side high. The shot beat Dansk to tie the game again.

Through two periods San Diego once again led in shots 20-13, but the score remained even, this time at two goals.

Tye McGinn reclaimed the lead for the Wolves 5:50 into the final frame. Rookie Cody Glass made a cross-ice pass to McGinn who found the back of the net on a blocker-side wrist shot.

For a third consecutive time this game, San Diego tied the game. Whitecloud was flagged for tripping and the Gulls went on the power play. Justin Kloos was patient with the puck and threw a no-look backhand pass to the point. A skate redirected the puck, but Andy Welinski caught it at the blue line and fired a shot on net. The shot was untouched, beating the goaltender cleanly at the 8:18 mark of the third period. Sam Steel also picked up an assist on the play.

Just 2:25 later, San Diego claimed their first lead of the game with another goal by Comtois. Adam Cracknell took the puck from deep in his own zone and on somewhat of a trick play, shot it at the corner of the opposite end of the ice. Comtois beat the Wolves defenseman to nullify the icing and beat Dansk with a slap shot from short range.

In a late attempt to tie the game, Chicago had sustained pressure in the Wolves zone. A quick pass by Tynan to Nic Hague in the slot was enough to do just that as his shot beat Jeff Glass five hole with 3:05 remaining in the game.

For the fourth time over the past seven Gulls games and the fifth time this postseason, the game would require an overtime. The shots were 33-22 in favor of the Gulls heading into the extra period.

The game was decided on a shot by Cody Glass, who went to the bench to get a new stick after his broke. On his way back, Chicago stole the puck and sent it down the ice to Cody Glass for a breakaway chance. Hyka picked up his second assist on the goal 14:03 into overtime.

“We understand these games are going to go long sometimes,” said head coach Dallas Eakins regarding the length of the game. “We understand there's going to be swings of momentum and lead changes and we just need to stay in the moment, no matter what our circumstance is. Not much will change for tomorrow. It’ll be right now, get rest, get rehydrated, get some fuel back in. We’ll make a couple of minor adjustments and we’ll ride again.”

The Western Conference Finals will resume for Game 2 tomorrow night, Saturday, May 18 at Allstate Arena (5 p.m. PT). The series will then shift to San Diego for Game 3 on Wednesday, May 22 at Pechanga Arena (7 p.m. PT).