The Silver Knights broke a tied game early in the third period and held on to defeat the San Diego Gulls, 4-2, today at Orleans Arena. San Diego continued its road struggles, as the team falls to 0-4-0 away from FivePoint Arena.

“We had some really strong pushes but just not on a consistent basis,” said Gulls head coach Kevin Dineen. “Our penalty kill was good all weekend and needed to be. We spent a lot of time in the box. I think our power play has won us some games this year but we didn’t get enough impact out of them to make a difference in these games. A good lesson-learning weekend but a painful one for us.”

Dorofeyev scored the game’s opening goal for Henderson at the 15:57 mark of the first period, as he split two Gulls defenders and beat San Diego goaltender Jeff Glass with backhanded shot for his first professional goal.

San Diego tied the game in the final moments of the period. After killing four consecutive Silver Knights power plays, the Gulls converted on their first opportunity with the man advantage. As a swarm of bodies battled for a loose puck in front of the net, Andrew Agozzino chipped it past Dansk with eight seconds to play, marking Agozzino’s 55th career power-play tally and his second with San Diego.

Glass kept the score even early in the second period with a save on Kaedan Korczak’s breakaway bid. Glass stopped 34-of-37 shots in his first start of the season.

“I thought Jeff Glass was probably our best player tonight,” said Chase De Leo in a postgame interview. “It says a lot about him. It’s pretty awesome that we can roll him out to be a brick for us back there and make some huge saves. I just want to make sure that Glass gets a lot of credit because he had a hell of a game for us.”

The Gulls took their first lead at 11:02 of the second period on Bryce Kindopp’s second career AHL goal. Carrick drew the primary assist as he raced down left wing and spotted Kindopp in front for the tap-in tally. De Leo also collected his fifth assist of the season on the goal.

McLaughlin's go-ahead goal came just over five minutes into the final frame on a centering pass from Gage Quinney, who parked himself behind the Gulls net. He found McLaughlin sneaking down from the point, and the defenseman one-timed a pass just under the crossbar for his second goal of the season.

Quinney capped the scoring with an empty-net goal at the 19:49 mark of the third period.

San Diego killed all six Henderson power plays to improve to 46-for-51 (90.2%) on the penalty kill this season, fifth-best in the AHL.

The Gulls return to Southern California to visit the Ontario Reign on Wednesday, March 3 (6 p.m.) at Toyota Sports Performance Center.

Back to All
Image Gallery 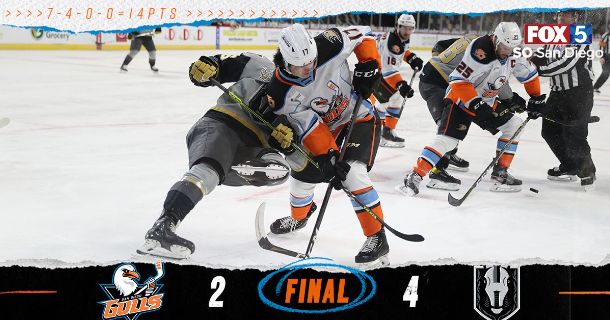