The San Diego Gulls fell 3-2 to the Henderson Silver Knights tonight at Orleans Arena. Despite the setback, San Diego co-leads the AHL in wins (7) and points (14).

“I think we pushed hard. I think we recognized we got run over there for the first ten minutes of the game and we had a good push back in the third,” said Gulls head coach Kevin Dineen. “But we just need a little more consistency to stabilize our 60 minute game.”

Jake McLaughlin opened the scoring for the Knights 4:21 into the game. After a San Diego turnover near the blue line, McLaughlin took a centering pass from Tomas Jurco and fired a shot past Lukas Dostal, giving Henderson an early lead.

The Silver Knights extended their lead in the second, scoring on a 5-on-3 power play. Jack Dugan set up Dylan Sikura on the backdoor and Sikura beat Dostal with a quick wrist shot, putting Henderson ahead 2-0 at the 10:18 mark of the middle frame.

“It’s obviously not the start we wanted,” said Gulls forward Chase De Leo. “They came out firing. We were struggling to get it out of our d-zone a little bit, which is not fun. Nobody wants to play in the d-zone, obviously. It’s tough to score when you’re in your own end.”

De Leo put the Gulls on the board with his third goal of the season midway through the second period. With just seconds remaining in a San Diego power play, Andrew Poturalski found Kodie Curran with a cross-ice pass. The veteran defensemen fired a shot on goal which De Leo deflected past Oscar Dansk, pulling San Diego within one with 6:55 remaining in the second.

“I think there was a little bit of simplicity,” said Dineen. “We were shooting the puck for one and obviously when you put pucks on net good things happen and it starts with bounces.”

Henderson reclaimed a two-goal lead as a long slap shot by Patrick Brown snuck past Dostal, giving the Knights a 3-1 edge with 3:14 left in the middle frame.

San Diego cut the deficit back to one as a result of a cleanly executed offensive zone face-off. Benoit-Olivier Groulx won the draw back to Trevor Carrick, who delivered a pass across the ice to Jamie Drysdale moving in towards the net. Drysdale took his time and picked his spot, beating Dansk with a wrist shot at the 6:06 mark of the third period.

With the goal, Drysdale co-leads the AHL in points (4-5=9) and paces league blueliners in goals. Groulx collected his first career assist on the goal and now owns points in two straight games (1-1=2).

The Gulls nearly evened the score in the game’s final moments, but could not find the game-tying goal before the final buzzer as Henderson prevailed 3-2.

“We need a better start than today, that’s for sure. It’s no secret,” said De Leo. “[Head Coach Kevin Dineen] says it best, there is one puck out there and two guys. Whoever wants it more is probably going to come away with the win. You can talk X’s and O’s all day and systems are great, but at the end of the day, it’s about that compete level and who’s going to want that puck more.”

San Diego and Henderson will conclude the three-game set with a matinee matchup tomorrow, Feb. 27 (2 p.m.) at Orleans Arena.

Back to All
Image Gallery 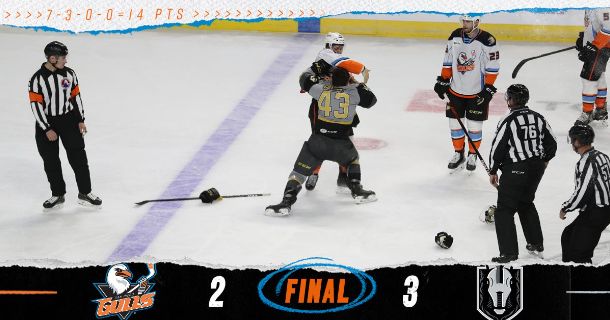