We highlight a few key wins, an award-winning theme night and our participation in Hockey Day SoCal.

With the Gulls’ 2019-20 season in the books, SanDiegoGulls.com takes a look back at some of the top moments of the fifth season in club history. We continue our list with moments 15-11. You can find moments 20-16 here.

As the Gulls moved into the second half of the season, the club continued to prove they belonged in playoff contention. A seven-game point streak began on the road in Grand Rapids, Michigan with an overtime loss against a team rolling with momentum, much like the Gulls. Prior to the game on Feb. 9 against Bakersfield, the Gulls recorded four wins in six games (4-0-2-0) over the likes of Tucson, San Jose and Grand Rapids.

The Gulls started the match with four unanswered goals as Chris Mueller, Alex Broadhurst, Daniel Sprong and Jack Kopacka each found the back of the net. In a comeback effort, Bakersfield cut into the lead with two goals, but it wasn’t enough to beat Gulls netminder Anthony Stolarz.

Stolarz made 31 saves in the win for a .939 save percentage (SV%), pushing his win streak to five games (5-0-0). The First Star of the night utilized the home crowd to his advantage, recroding his fourth straight win at Pechanga Arena.

“It’s great to be on the run that we are right now,” said Stolarz regarding the team’s success. “It’s exciting. Obviously, we know every point is crucial especially down the stretch, when you’re playing a team who’s behind in the standings. We don’t want to get too high right now because we’re playing a good team next week in Iowa. So, enjoy the day off tomorrow and get back to work on Tuesday.” 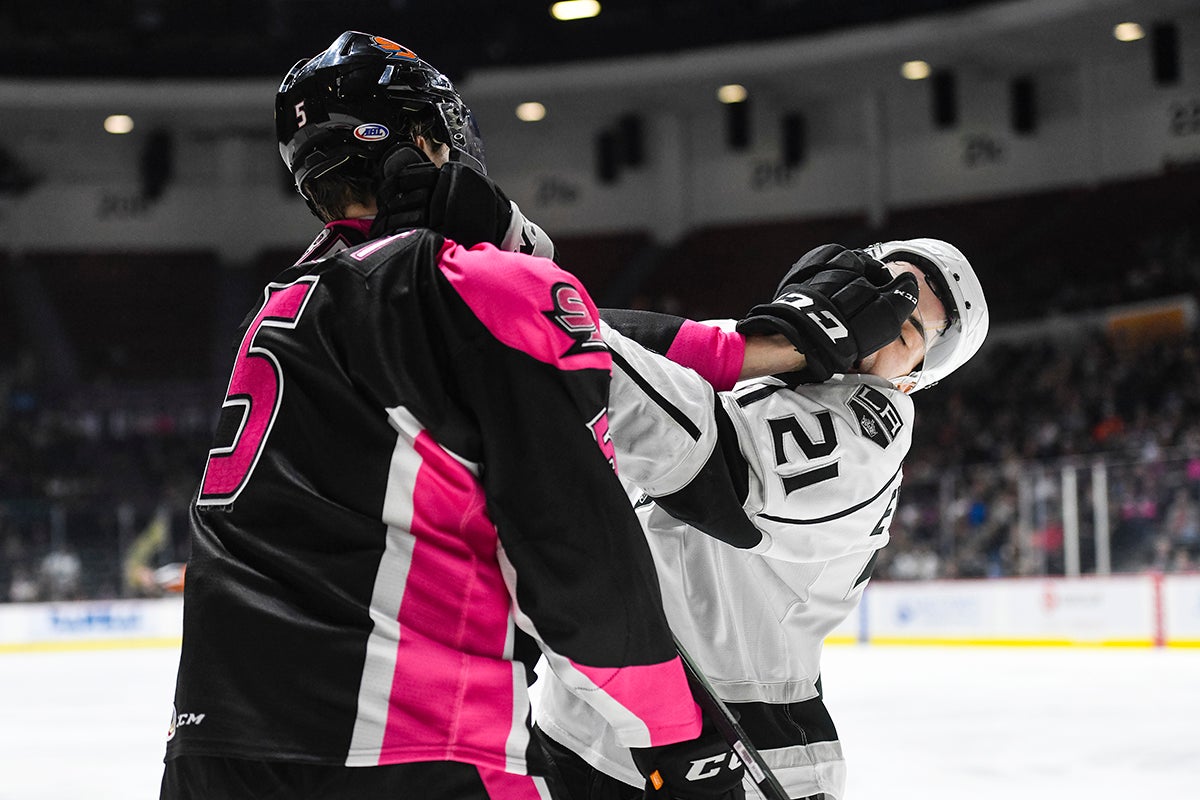 Hockey's exponential growth in California over the last decade is evident, most notably in southern half of the state. In recognition of the sport’s growth in the area, FOX Sports West, Prime Ticket and FOX Sports San Diego hosted over eight continuous hours of hockey themed programming dubbed "Hockey Day SoCal”.

In the first two years of the annual event, the Anaheim Ducks and the Los Angeles Kings faced off, showing off the consistent competition between the two organizations. That NHL rivalry quickly extended down to the AHL between the San Diego Gulls and Ontario Reign. The two AHL rivals joined in to compete in the third year of the event.

The program began with “Hockey Day SoCal Live,” a two-hour hockey themed telecast, celebrating the history and future of the sport in Southern California. The Gulls and Reign kicked off the first of the two hockey games in a 4 p.m. matinee. A see-saw game featured eight goals in regulation, and the Reign forced overtime in the last minute of the third to eventually win the game by a score of 5-4.

The overtime thriller showed off the future talent of the NHL and the AHL’s resounding success in the San Diego area. 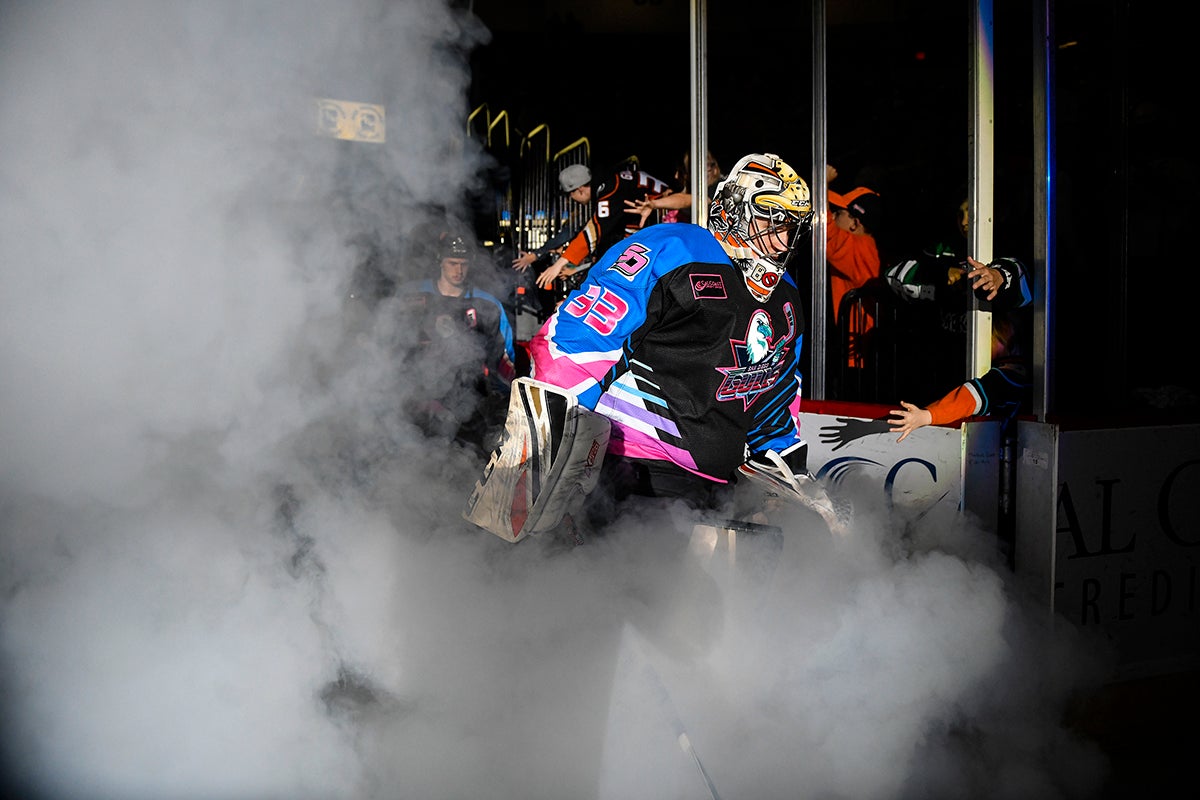 In what the AHL would later name as the Most Unique Ticket Sales Promotion or Theme Night of the hockey season, the Gulls hosted their biggest rival in front of a 10,000+ crowd celebrating the club’s first ever 80’s Night.

Brent Gates Jr. set the tone early with a goal 22 seconds into the game, marking the second quickest goal to start a game in club history.

“I don’t think there’s anything better,” said Gates Jr. “Getting a goal on your first shift, you feel good and then you have to come down from it, and play the rest of the game hard and play it well. It was really fun getting a first start in a while.”

Just over a minute later, Martin Frk was awarded a penalty shot after being interfered with on a breakaway. Ontario’s leading scorer didn’t waste the opportunity and tied the score just 1:27 into the contest. Following the tying score, San Diego took and didn’t look back.

With a final score of 6-1, the contest would result as one of three blowout victories for San Diego over Ontario.

“Anytime we play Ontario, it’s always a big game,” said Carrick following the game. “We’re chasing them. From here on out, every game is going to be huge. We have a playoff mindset right now and it’s only January. I’m sure everyone has the same attitude at this point because it is so tight, but we’re looking to get any win we can.” 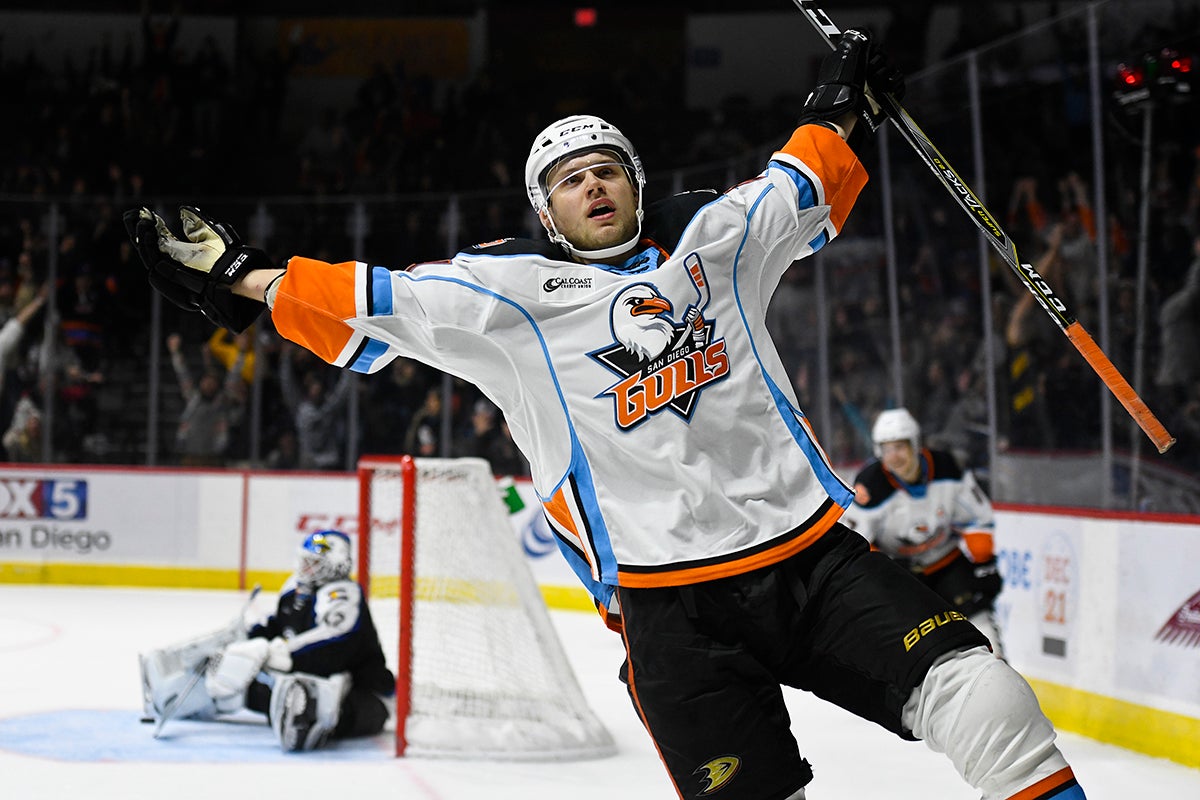 12. Jacob Larsson Gets the Gulls Back to Even with Overtime-Winner Against the Eagles – December 7, 2019

The Gulls pulled their first two victories of the season against the Eagles in early November, which spelled a revenge matchup in their return to America’s Finest City. Prior to the game, the Gulls held an 8-9-1-0 mark, meaning a win would put the club over .500 for the first time of the season, a significant achievement after starting the season 0-6-0-0.

The game didn’t start the way San Diego drew it up as Colorado came out of the gates strong, scoring two goals in the first 1:54 of the game.San Diego trailed by the pair of goals, but regrouped for the final 40 minutes. Rookie Antoine Morand answered with a goal to cut into the lead 3:38 into the second frame. Deven Sideroff followed by potting his first goal of the campaign with 16 seconds remaining to tie it up two goals apiece before the second intermission.

Halfway through the third period, Patrick Sieloff netted a goal to give San Diego its first lead of the game, but Colorado tied it up late to force overtime. A great setup pass by Jani Hakanpaa gave Jacob Larsson a chance on the breakaway in extra time. The defenseman made a nifty move and found the back of the net on a backhand chance, giving the Gulls their first overtime win of the season.

“We’ve been battling for that for quite a while,” said Gulls head coach Kevin Dineen on getting back to .500. “We put ourselves in a hole in the beginning of the year and it doesn’t happen overnight. To get there, it’s a big moment for us. The effort was there. We got down early in the game just like we got down early in the season, but it showed some great character. We got some contributions from some different places tonight and that was a big difference-maker for us.” 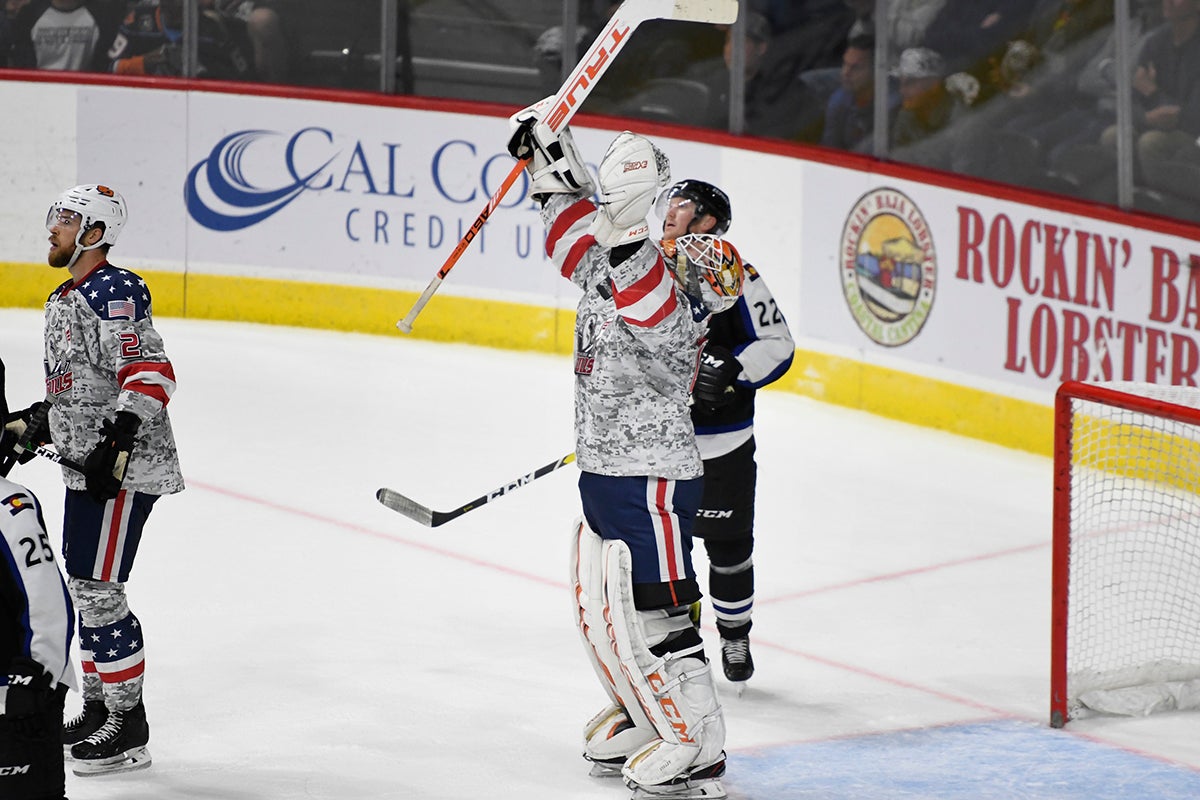 11. The Gulls Claim Their First Victory of the Season While Honoring Military Heroes – November 1, 2019

The Gulls start of the 2019-20 season was not the one they hoped for, as the club opened their schedule with six consecutive losses, the most games without a win to begin a season in club history. As calendars flipped from October to November, the team looked to change the script.

The Colorado Eagles visited San Diego for back-to-back contests as the hometown crowd prepared for the annual Military Weekend. The special weekend paid tribute to local military members and their families. The team donned new camouflage specialty jerseys later autographed and auctioned to help raise money for the Armed Services YMCA and All-Star Vets. In addition, the Gulls provide tickets, at no cost, to over 3,500 military members and their families.

The game displayed many swings in momentum as neither team could completely control the night. San Diego took the lead several times, but Colorado continued to push back to even the score.

Isac Lundestrom scored the decisive go-ahead goal in the third period. his first game-winning goal of his young career. The 5-4 win over Colorado marked the first of the season, Dineen’s first as the head coach in San Diego and a significant turning point for the Gulls season.

“It feels great. It’s one thing to look at the time frame, as it’s been a while,” Dineen said following the win. “No better place to get it than in front of our home fans. The military as well was represented, as they had us over at the Navy base yesterday and it was nice to follow through with that crew and get a win.”