Moments include a memorable hat trick for Kiefer Sherwood, key wins against division foes and an award-winning performance.

With the Gulls’ 2019-20 season in the books, SanDiegoGulls.com takes a look back at some of the top moments of the fifth season in club history. We continue our list with moments 10-6. You can find moments 15-11 here and moments 20-16 here.

In a back-and-forth matchup against a high-powered offense, the Gulls defeated the Stockton Heat by two goals, one of which an empty netter. Both teams were competing for playoff positioning and they knew it. The game was tight defensively and skaters brought intensity and focus befitting a playoff matchup.

Stockton struck first with a power play goal, but San Diego netted the next three goals. Josh Mahura, Alex Broadhurst and Chris Mueller, two of which came on the man advantage. An early third-period score by the Heat made it a one-goal game, forcing the Gulls to crack down defensively.

Max Comtois finally put the game away with an empty-netter with 26 seconds remaining in regulation.

“That’s part of the learning experience for a young player,” said head coach Kevin Dineen on the amount of special teams play in the contest. “There are times that that’s going to happen. If you’re not on special teams, you have to stay engaged in the game, whether that’s mentally where you’re watching or you get up and give your legs a squeeze. I thought our guys did a good job of that some guys that sat on the bench for quite a while but then they bounced right out there and had some good shifts.”

San Diego;s defensive efforts limited Stockton to just four shots in the final period during the Heat's comeback attempt, a strong defensive effort the team would replicate as the season moved into March.

The win marked their fifth straight game with a point against Stockton (4-0-1-0).

The Gulls set the tone early in 2020 with five consecutive wins that included victories over upper echelon teams like Iowa, Stockton and Ontario. San Diego had won four straight and allowed just one goal in the three most recent games leading up to the matchup on Jan. 18 at Mechanics Bank Arena in Bakersfield.

The see-saw game saw the team exchange goals as the momentum swayed between the Gulls and Condors. Bakersfield led 3-2 after two periods, but Sam Carrick tied the game halfway through the third frame. After recording the primary assist on Carrick’s tying goal, Troy Terry netted a goal just two minutes later, giving San Diego a late lead. Anthony Stolarz held strong in net and the Gulls held on to the lead to secure a 4-3 win over the Condors.

“I’m trying to help where I can,” said Terry following the game. “I think we have a really good team. I think we just needed some confidence. We were able to win those first two games and I think it just does a lot for a team and they start believing in themselves. That’s the biggest thing, everyone’s playing for each other and the team believes in themselves.”

With the game-winning goal and two primary assists (1-2=3, +2), Terry was coming into his own. The second-year forward’s three points extended his point and assist streaks to five games (2-7=9, +10). With two big points in the standings, the Gulls were just one point away from the Reign for fourth in the division with four fewer games played. 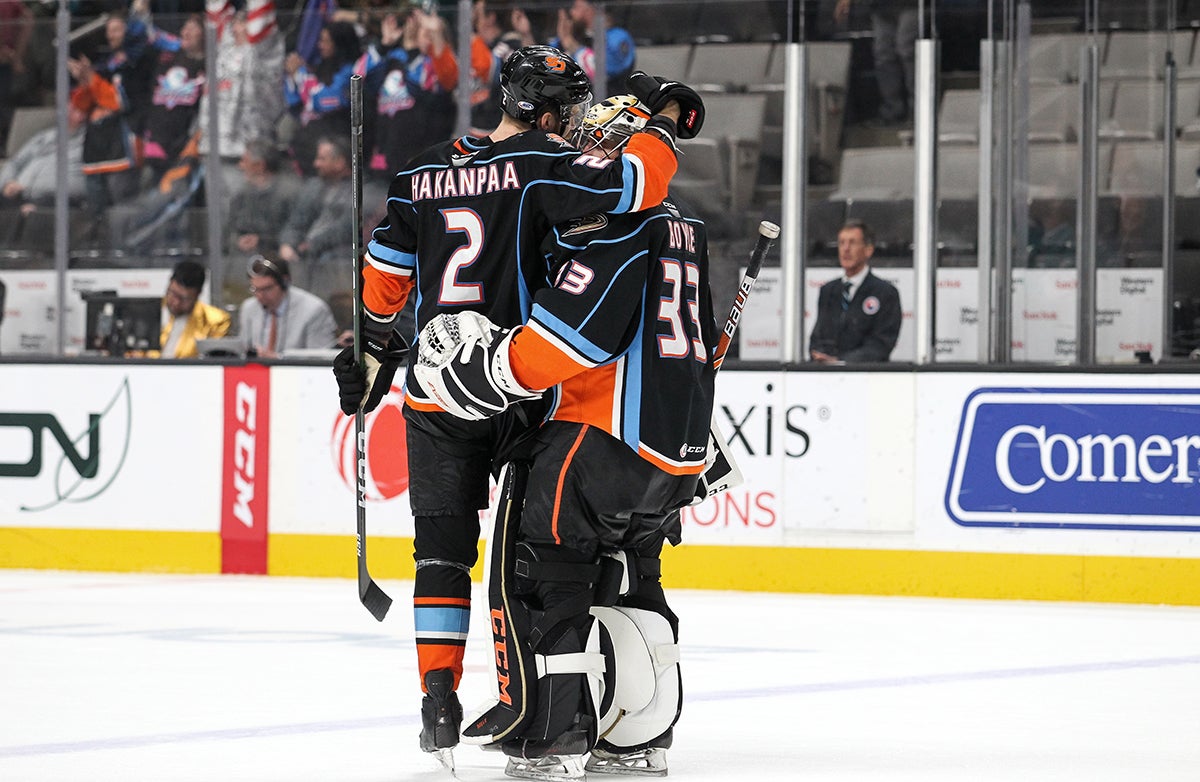 At the beginning of the Gulls club record seven-game road trip, the team was set up to play at Tucson on a Wednesday night, before heading north to Stockton on that Friday. The Gulls split their first two games to start the stretch of games away from home.

San Diego’s 4-2 win at Stockton on Friday ended at 9:20 p.m., and the club had just under 16 hours to wrap up, drive to San Jose, get some sleep and prepare for a Saturday matinee at SAP Center. Beginning at 1:15 p.m. in what would be their third game in a different city in four days, the Gulls and Barracuda faced off. The short turnaround proved to be problematic for the Gulls early on, as the Barracuda scored two goals in the first period and held a 3-1 lead early in the third.

Terry got the Gulls back in the game with back-to-back goals in the third period, forcing overtime. Gulls netminder Kevin Boyle made a series of incredible saves early in the extra period to keep the game going. Comtois found some extra gas in the tank later in session, joining Justin Kloos on a two-on-one rush. San Jose’s goaltender, Zachary Sawchenko, blocked the initial shot, but Comtois batted the rebound out of midair and into the net for his first career overtime-winner, sealing a 4-3 win.

“Wides [Chris Wideman] was talking about how it’s kind of halftime with last night and this is just the second half of a long game,” said Boyle after the game. “We were joking around with it, having fun and we have a great group in there that really supports each other and they really want to battle for each other. It makes it easy to come in and work hard. We had a nice comeback there and it was a good win.” 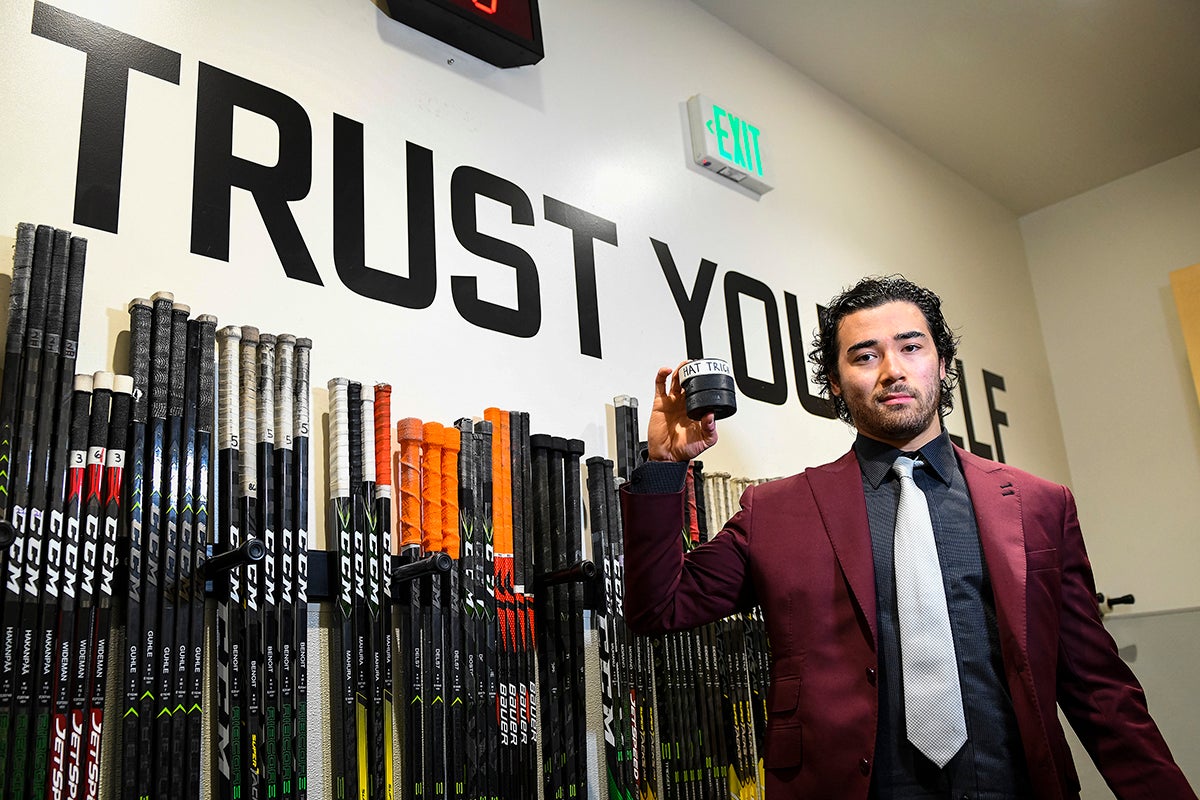 Prior to the 2019-20 season, the Gulls never celebrated a hat trick on home ice in their short history. This year, fans at Pechanga Arena San Diego enjoyed two, each coming in matchups against the Barracuda.

In this top moment of the season, Kiefer Sherwood responded to an early goal by San Jose with a rare penalty shot. The speedy winger earned the opportunity after breaking in behind the San Jose defense, forcing their team to pull him down before he attempted a shot. Taking his time weaving his way towards the net, Sherwood potted a goal for the third successful penalty shot goal in club history.

Each team scored another goal, making it 2-2 late in the first period, but Sherwood broke that tie with his second of the night. Comtois was serving a high-sticking penalty when Carrick got the puck and utilized the boards for a bank pass to set up a shorthanded opportunity for Sherwood. A quick wrist shot beat the goaltender and set up the Gulls with a 3-2 advantage with 3.4 seconds remaining in the opening frame.

After Kloos added another goal for San Diego, Sherwood completed his three-goal performance with his second shorthanded goal of the evening. Chase De Leo capitalized on a turnover in the offensive zone and passed the puck to Sherwood who got a hard wrist shot past the San Jose goaltender. The young forward became the first Gull to record multiple shorthanded goals in a single game and the sixth Gulls player to record a hat trick, setting San Diego up for a 5-3 win over San Jose.

“He works hard and those goals aren’t easy goals,” said Chris Mueller after the game. “He draws a penalty shot, he has an unbelievable shot while shorthanded and then Chase De Leo gives him a great pass for another shorthanded goal. Those are hard-working goals and great shots, so he deserves every bit of it.” 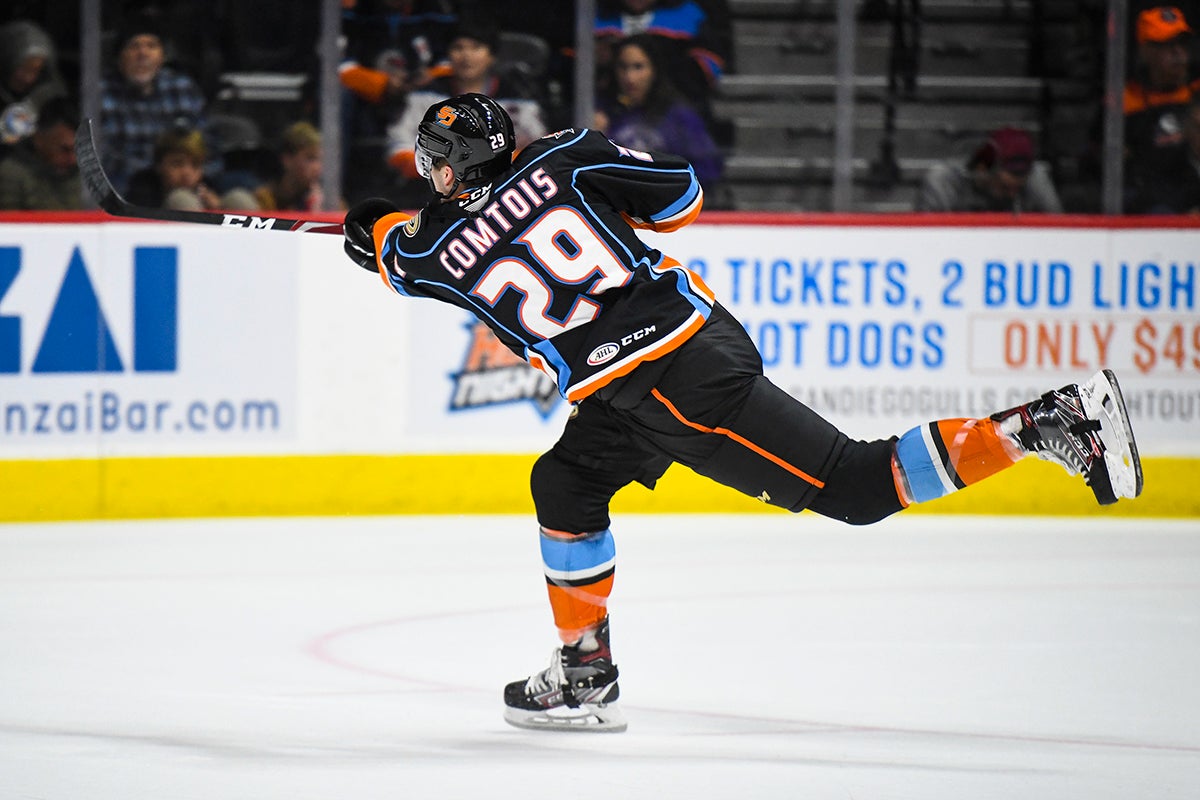 With 31 other competing teams in the AHL, league awards feel few and far between. However, after a breakout performance in February, Comtois was recognized as the CCM/AHL Rookie of the Month. Comtois became the first and only Pacific Division player to be selected for a league award in 2019-20 and was just the second Gull to be selected Rookie of the Month in club history. Defenseman Brandon Montour was named the recipient in November 2015.

“It just proves were on a good stretch right now with the team,” said Comtois after learning of the league honor. “We’re winning games, we’re doing everything we can to push for a playoff spot and to battle and to fight for it. To get that honor is good for me and is good for my confidence, but it comes from a lot of the good passes from my teammates and a lot of the good plays that we’re making right now.”

The Quebec native registered eight goals, including four game-winning tallies, as well as 8-5=13 points in 13 games for San Diego during February. His eight goals were good enough to co-lead the AHL in February, helping the Gulls to a 9-2-2-0 record in the month. All eight of his goals came in his last eight games played (8-3=11).

In addition, a week prior to the announcement, the forward earned CCM/AHL Player of the Week honors on Feb. 24. In the four-game week, Comtois netted five goals, including three game-winners, and 5-2=7 points to help the Gulls continue their push for a playoff spot.