The final installment includes a special team announcement, our first hat trick on home ice and the inspirational story of Ashley Keenberg.

During the morning skate at Pechanga Arena San Diego prior to the Gulls 2019-20 home opener, head coach Kevin Dineen gathered the team at center ice for a short speech.

The discussion opened with the anticipation for the first of many big nights in front of a large San Diego crowd and wrapped up with a big announcement. Dineen revealed that veteran forward Sam Carrick would serve as the third team captain in club history.

“Sam exemplifies exactly what you’re looking for in a player,” said Dineen. “He’s dedicated, he’s very sincere and he has a strong voice in the locker room. Unanimously, he was the right choice to wear the ‘C’ for our team.”

Carrick joined the Gulls following a Ducks trade with the Chicago Blackhawks on March 1, 2017 and exemplified what it means to be a leader both on and off the ice. After two seasons of serving as an alternate captain for San Diego, the veteran center donned the ‘C’ to open the home schedule.

“Being named captain is a huge honor,” said Carrick. “We are a team, and everyone needs to be a leader, not just those who wear a letter on their sweater. It is a privilege to play for San Diego and in front of our fans, and we don’t take the impact we are able to have on the community for granted. I’m excited for the future of the organization and this is a responsibility I don’t take lightly.” 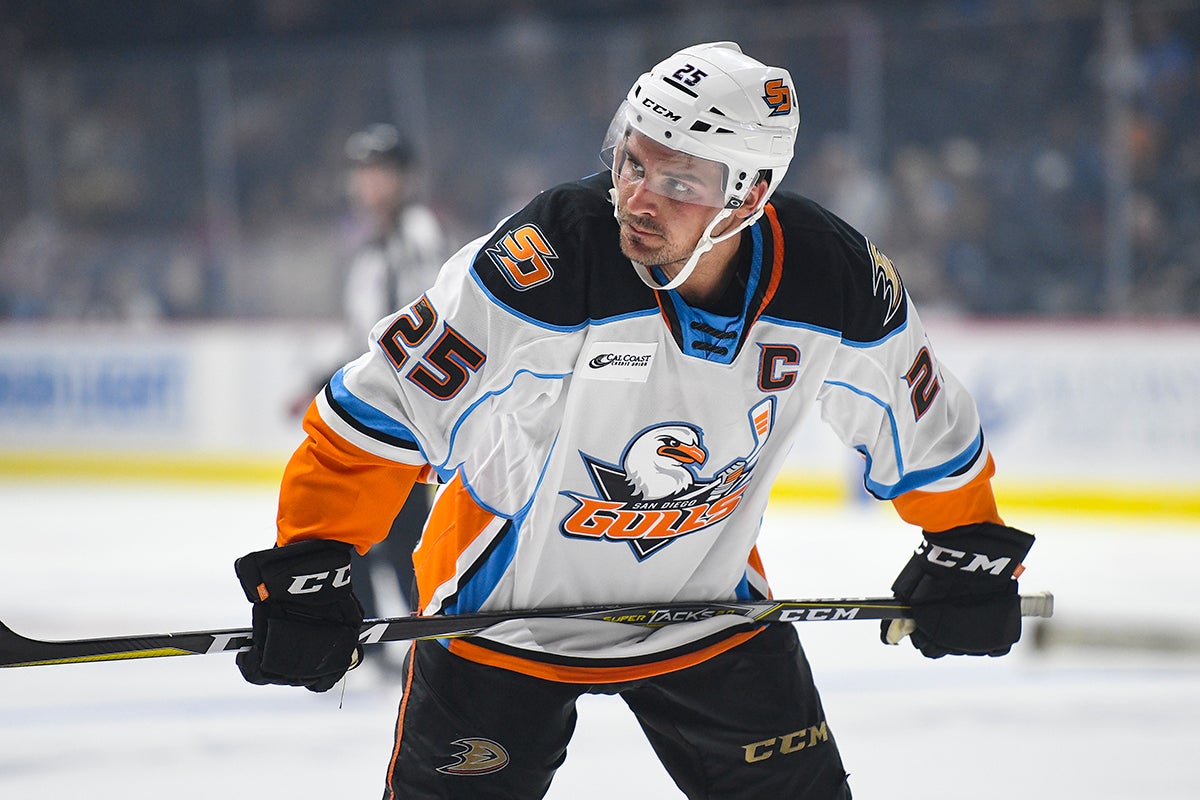 The newly appointed captain led by example in his first season in the role, pacing the Gulls in scoring (23-20=43), goals, plus/minus (+27), shorthanded goals (4), shots (144), co-leading in power-play goals and ranking second in assists. Carrick also surpassed teammate Corey Tropp to lead San Diego in all-time goals (71) and was the only player in the league to record four separate six-game point streaks.

Anaheim recalled Carrick to play in nine NHL games from December 10 to January 2, where he scored his first goal for the Ducks and was eventually signed to a one-year contract extension with the organization in the offseason. 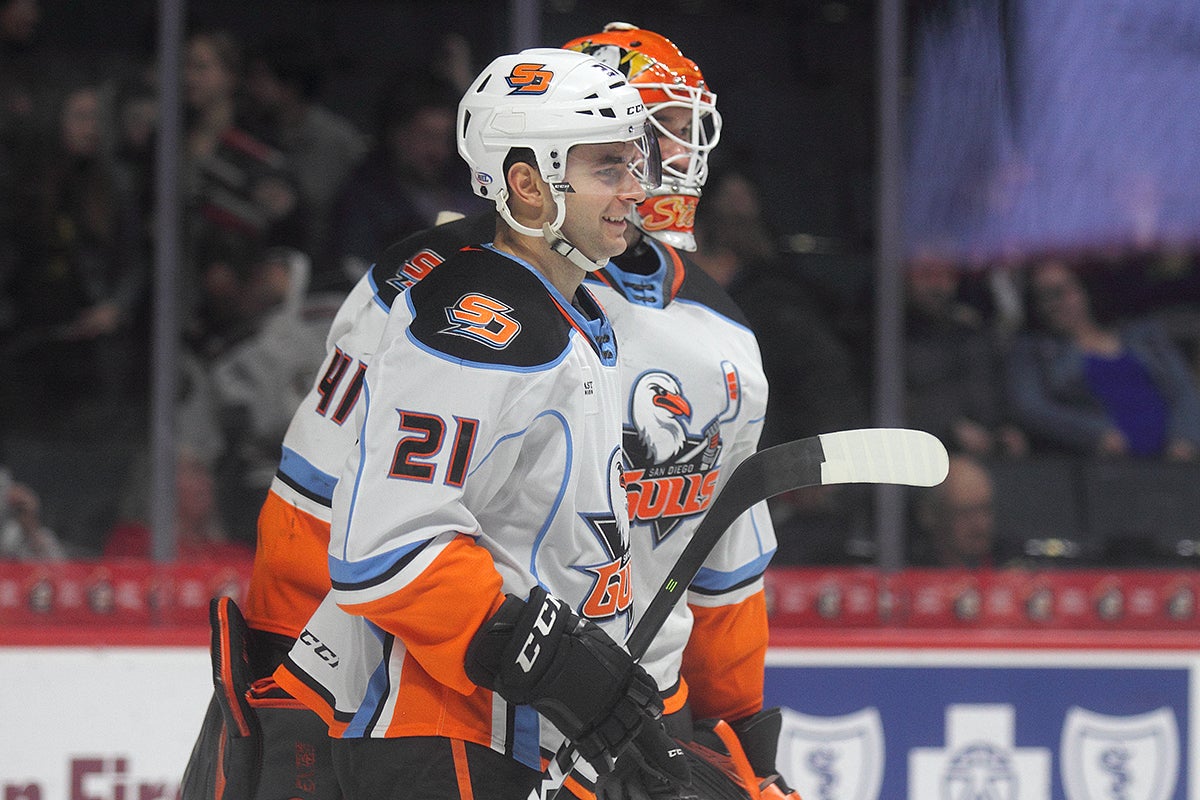 It isn’t often the Gulls travel to play teams outside the Pacific Division. San Diego saw two Central Division teams in its 2019-20 schedule, including the Grand Rapids Griffins.

The Gulls traveled to Michigan in late January to face the Griffins in a back-to-back set before entering the AHL All-Star Break. For one player, it was a special road trip.

Rookie forward Brent Gates Jr., born and raised in Grand Rapids, returned home for the first time as a professional hockey player. He grew up watching the Griffins and spent his free time skating outdoors. Aside from a casual skate when visiting home, the Grand Rapids native hadn’t been back home to play hockey since he was a young teenager.

After a 4-3 overtime setback in the first of the two weekend games, Gates Jr. joined the lineup for the Saturday night contest. The game headed toward the third period tied 1-1 despite Grand Rapids leading 29-11 in shots.

Then, the hometown kid made the big play.

Gates, skating in his first professional game in a city he calls home, took a setup pass from Max Comtois and put it in the back of the net with 6:07 remaining in regulation. The Gulls held off the Griffins and Carrick added an empty-net goal to seal a 3-1 victory.

“You couldn’t have drawn it up any better,” said Gates Jr. after the game. “It was kind of a weird game honestly. We didn’t have a ton of shots. We kind of just weathered their storm. Overall, it was just a weird game for us, but then to come out in the third and get a nice pass from [Max Comtois] and to be able to put it in for the game-winner, and here. That’s was surreal and something I’ll never forget.”

His father, Gates Sr., is a staple in Grand Rapids sports as a Major League Baseball player. This was his son's chance to return home and make his own mark.

It was a long road to a professional hockey career, but scoring the game-deciding goal in front of his father among other friends and family made it that much sweeter. 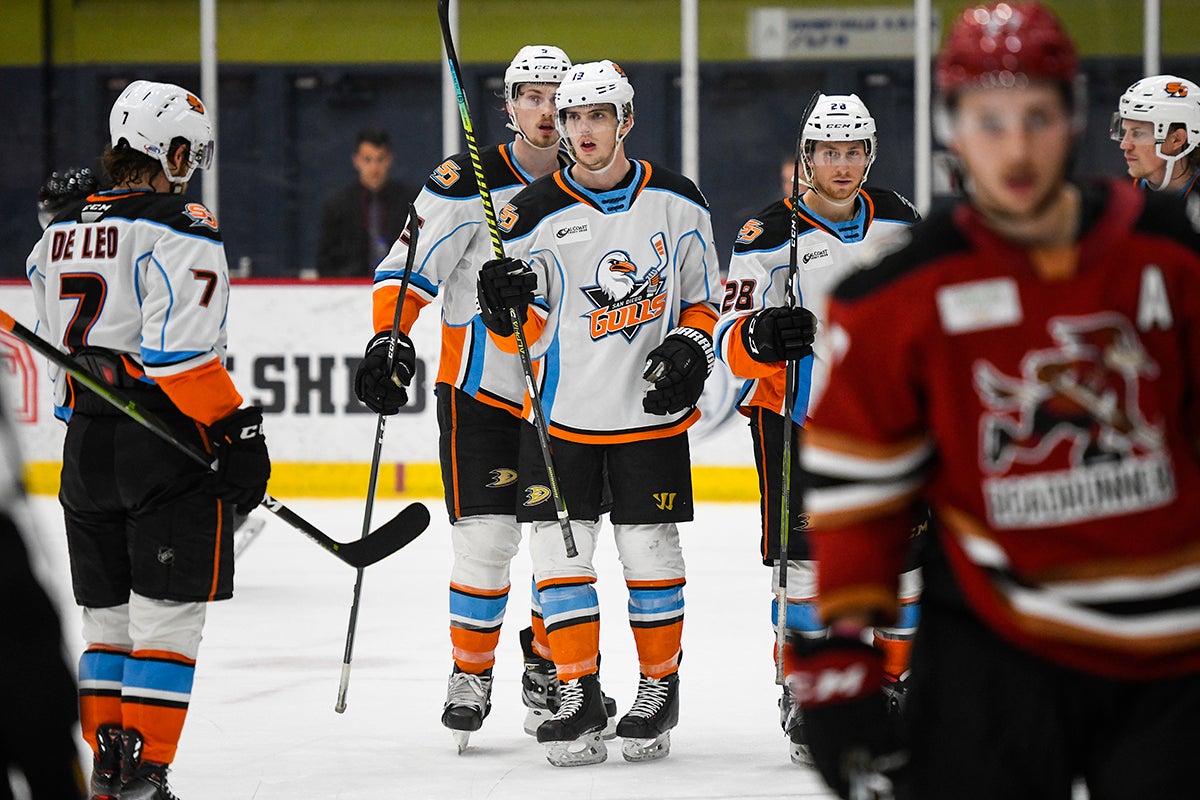 San Diego faced a pivotal moment as the team closed a club-record seven-game road trip in Tucson and a back-to-back against the Roadrunners. The team found themselves with something to prove in the second game, coming off a 3-0 loss the night before.

Second-year forward Troy Terry shook a three-game pointless drought with a four-point performance (2-2=4), beginning with the game’s first goal (PPG) towards the end of the opening frame.

Tucson tied the game in the second period, but Terry started an incredible third-period performance with the primary assist on Carrick’s goal 22 seconds into the frame.

Terry added his second goal of the night 3:17 after the assist and capped off his performance with another primary assist on an insurance goal late in the game to guide the Gulls to a 4-2 win. His four points marked a career high and a Gulls season high as the forward became the eighth player in club history to register four-or-more points in a game.

“There’s times when a player is contributing like that offensively, you say, ‘we’ll let the other guys take care of business,’” said Dineen regarding Terry’s performance. “Sometimes you put a player in there because they earn it, and he certainly earned that spot to be out there. You kind of need to score a goal there in the last minute and a half when you’re up by a goal and the goalie isn’t pulled. A big moment for our team.” 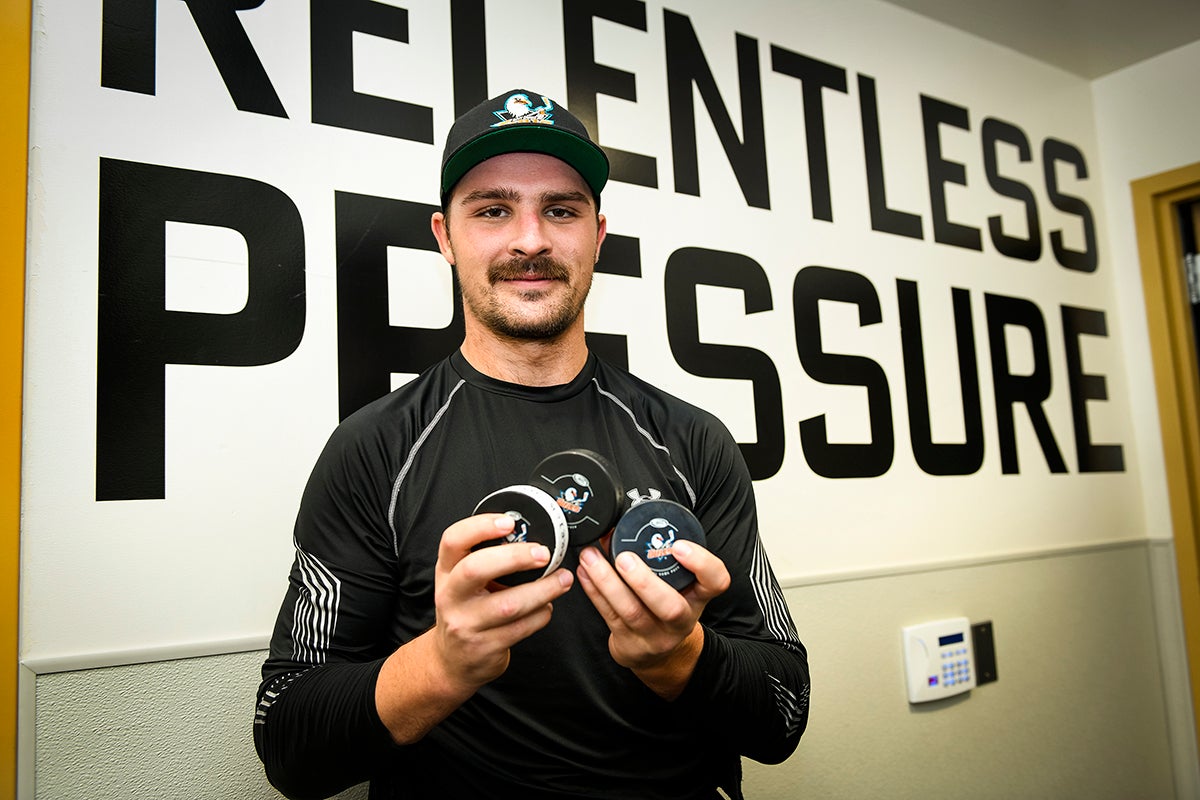 One of the biggest regular season wins in club history came November 13, when the San Jose Barracuda visited San Diego for a Wednesday night contest. San Jose scored two of the first three goals of the game before San Diego took over the momentum. The Gulls tallied four goals in the first period, including two by Carrick.

The Barracuda scored the lone goal in the second period to bring the game to within a goal, but the Gulls turned the game into a classic in the final frame. It took 1:43 for Carrick to score on the man advantage for his third goal of the night, marking the first Gulls hat trick on home ice at Pechanga Arena San Diego and the second of his career. As the hats came flying down onto the ice, the crowd came unglued and it was all gas, no brakes for the rest of the game.

“Sam is a responsible player and is a good example for a lot of our guys, young and old, and he plays the game the correct way,” said Dineen. “He takes care of business in his zone, he’s big on faceoffs and strong on the penalty kill, so he does a lot of the little areas of the game well. When you do that sometimes you get rewarded, so it was good to see that happen tonight with the hat trick.”

The night was one with many records, milestones and highlights. Nine goals marked the most the Gulls scored in a single game in club history. Thirteen players recorded at least one goal or assist, and a club record eight skaters tallied multiple points. Chris Wideman tied a career high with three assists, Justin Kloos scored his first two goals of the season and the team combined for two power-play goals and another two while shorthanded.

“I love the chant that they get going when they get under the goalie’s skin a bit,” said Carrick referring to the impact Gulls fans can have on a game. “It’s so much fun. Obviously, we want to score nine goals every game, but to do it tonight in front of our own crowd is something special.” 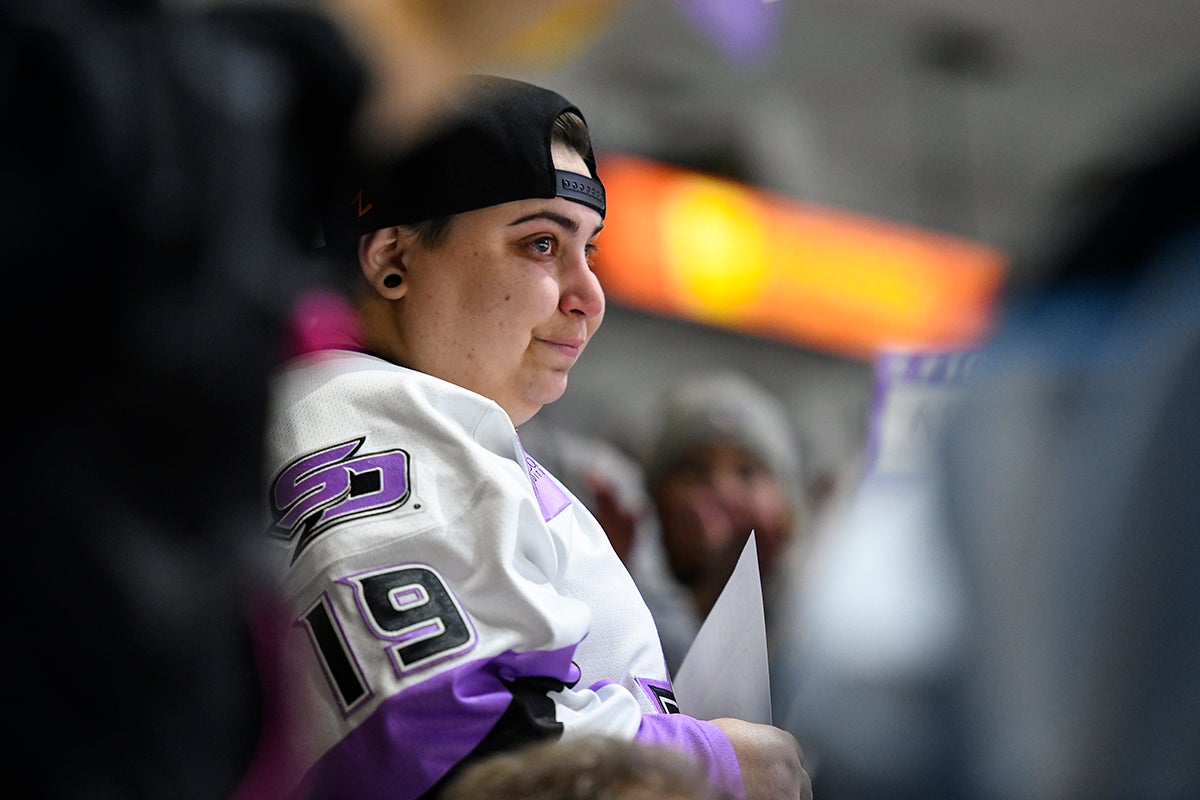 Some things are bigger than hockey, and the top moment from San Diego’s 2019-20 season proves it.

In the club’s second annual Hockey Fights Cancer game held November 23, the Gulls donned lavender-themed jerseys in honor of the specialty night. In addition, “I Fight For” signs were given to fans to write down the name of a loved one affected by cancer that was later used for a moment of awareness.

The Gulls honored season ticket holder and diehard fan, Ashley Keenberg, who  battled cancer throughout her life. The team invited her behind the scenes on gameday to present her with a custom jersey and have her announce the Gulls starting lineup to the team in the locker room prior to the game.

The Gulls also had Ashley drop the ceremonial puck and used a break in game action to honor her with a video tribute. Everyone at Pechanga Arena San Diego, including fans, players and referees, gave Ashley a standing ovation when her story was told during the video. 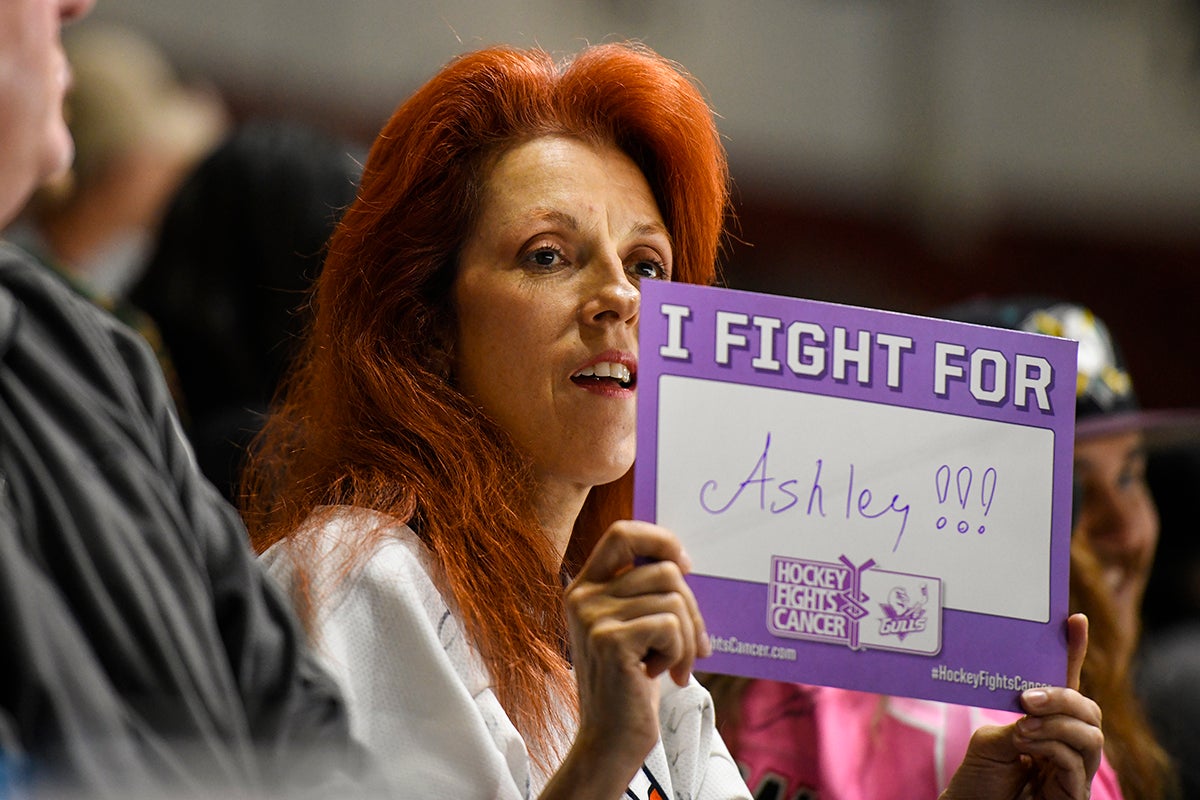 “It’s bringing awareness to a market that might not think that they’re at risk,” said Keenberg regarding Hockey Fights Cancer. “I think that bringing awareness is one of the best things you can do. If people are more vigilant and know their risks for cancer, it helps a lot. For the NHL to be involved, the Gulls involved, it means a lot. It means that they’re bringing more awareness to a disease that affects a lot of people. I think it’s important.”

The purpose of Hockey Fights Cancer is for hockey teams and fans to come together in an effort to help find a cure. Raising awareness and providing those impacted by cancer with a much-needed distraction means so much more than what transpires on the ice, which is what made this night so special to everyone in attendance.